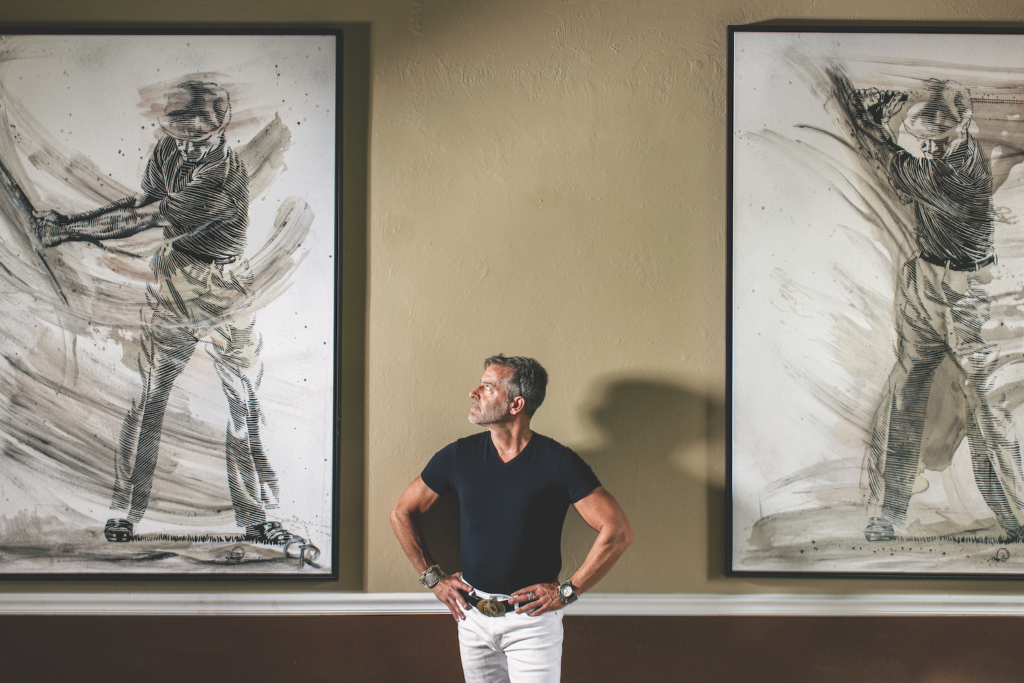 Nearly two decades ago, multimedia artist Christopher Obetz hit the jackpot when he stopped inside a New York City gallery on a walk with his dog. In its back room, behind the exhibition of impressionist and Renaissance paintings, he found thousands of works by the late illustrator Anthony Ravielli, whose acclaimed depictions of golfers in motion graced the pages of the sport’s most celebrated guides. “I thought, ‘My God, this is like the holy grail of golf instruction,’” the Fort Myers-based artist says.

A lifelong golfer, he had first encountered Ravielli’s work as an 8 year old, when his grandfather gave him the book Five Lessons: Modern Fundamentals of Golf. With exacting detail, the drawings inside beautifully illustrated the techniques for a perfect swing, grip and stance. Although the illustrations in that Madison Avenue gallery were already promised to a Texas auction house, the artist was able to plead his case and convinced the gallerist to let him buy the works instead. “Golf is in my DNA,” Obetz says. Not only had Obetz’s great-uncle helped bring the Ryder Cup to the U.S., but his father also was best man at 73-time PGA tour winner Jack Nicklaus’ wedding. The gallerist couldn’t say no. 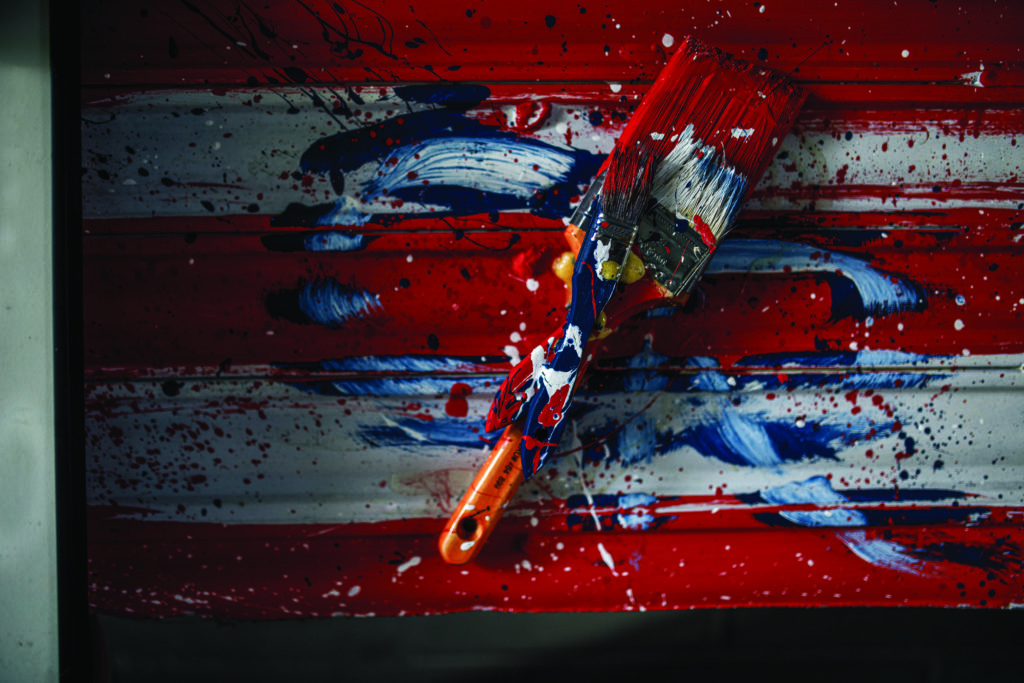 That chance encounter was the genesis of Pop Art Golf, a body of work that Obetz began in 2018 and in which he reworks Ravielli’s black-and-white illustrations, altering their scale, adding new materials and tracing the dynamism of the golfer’s swing with splatters and washes of color. This past winter, the artist unveiled a new piece at Fort Myers’ Cypress Lake Golf Club: Patty Berg—Anchored, an assemblage of reclaimed wood built as a frame around a Ravielli illustration, energized by lively brushstrokes of paint. The wooden frame was inspired by the planks of a private footbridge that connected Berg’s home to the golf club, where she had been a member until her death in 2006 at the age of 88. The wood scraps are a metaphor for the bridges she crossed co-founding the Ladies Professional Golf Association in 1950. “She was an empowered woman,” Obetz says. “And now we get to retell her story.” He dedicated the piece to his parents.

Through brushstrokes, or sometimes paint poured onto the canvas, Obetz brings the implied motions of Ravielli’s drawings to life. As an artist of found objects, he’s included materials pulled directly from the course—sand from a bunker, for example, used to represent particles of space in motion, or balls and clubs, painted and incorporated into wall-mounted assemblage. Pop Art Golf pieces are in both private and corporate collections, including Jack Nicklaus’. PGA star Tom Watson and actor Nicolas Cage also collect Obetz’s work. During next year’s U.S. Masters tour, the series is slated for exhibition at the Augusta Museum of History in Georgia. 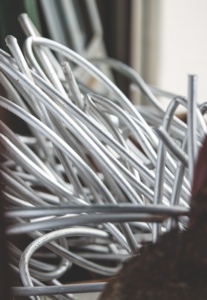 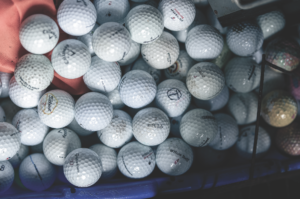 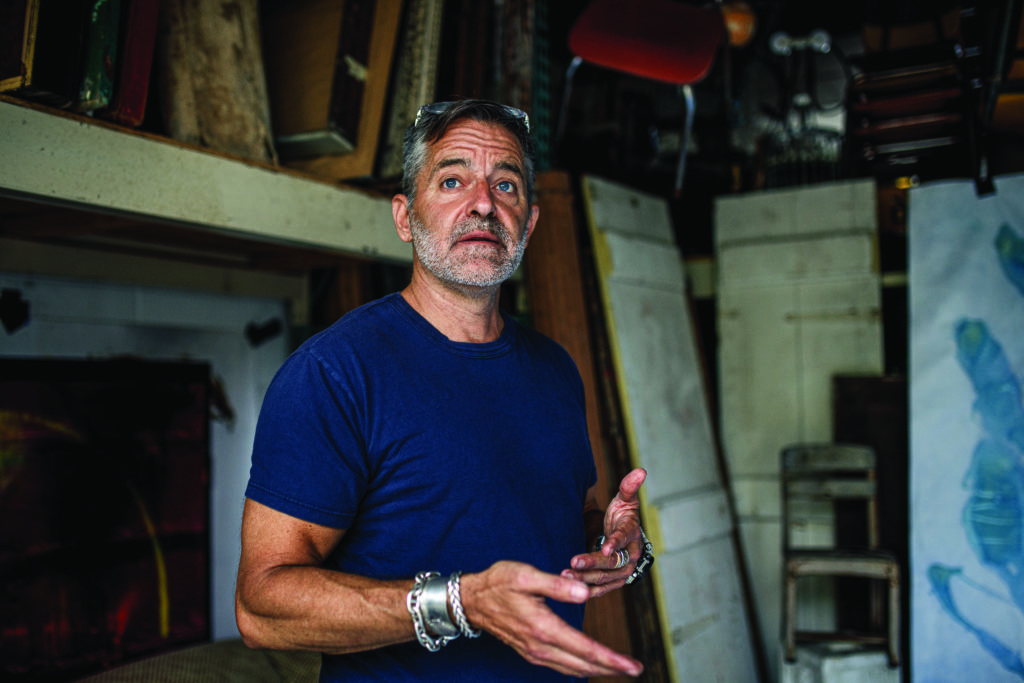 While the found materials of Pop Art Golf honor Obetz’s family history and the history of the game, they’re part of a deeper message that courses through the artist’s larger practice. “My whole goal is to celebrate the past and bring it into the future in new ways,” he says. “This series was an outgrowth of my entire life of searching for forgotten beauty, of rescuing and repurposing not only myself, but others and their art.” 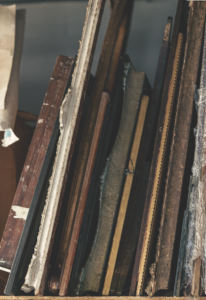 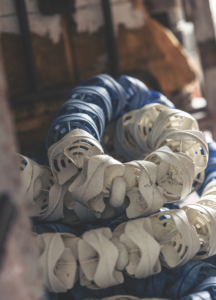 Obetz, who spent 17 years in New York before moving to Fort Myers in 2008, grew up in Columbus, Ohio, in the 1970s. He majored in art history at Kenyon College, where he discovered his love for photography. As the young photographer shot urinals, soup cans and other mundane objects images of abandonment, as he called them, the motto “forgotten beauty found” emerged as a guiding philosophy in his work that continues today. “I see beauty in things that are lost and forgotten and passed up, abandoned, overlooked,” says Obetz, who works with discarded objects rescued from scrap yards and incorporates historical figures whose fanfare has long died out. His practice of reviving these things as works of art and objects of importance and celebration, is in large part inspired by his own recovery as a childhood survivor of sexual assault. “What I see in my art and what I want to say about myself is that the work is about hope,” he says. “I want to reach people who need to know that they are beautiful and bring hope to everything I do.”

Using his talents to make a difference in people’s lives, he is donating all proceeds from prints of his Patty Berg work to the Southwest Florida Junior Golf Association and Patty Berg Scholarship fund to support golfers in college. In life, as in golf, he says, “You’ve got to have an impact, and you’ve got to have a follow through.” 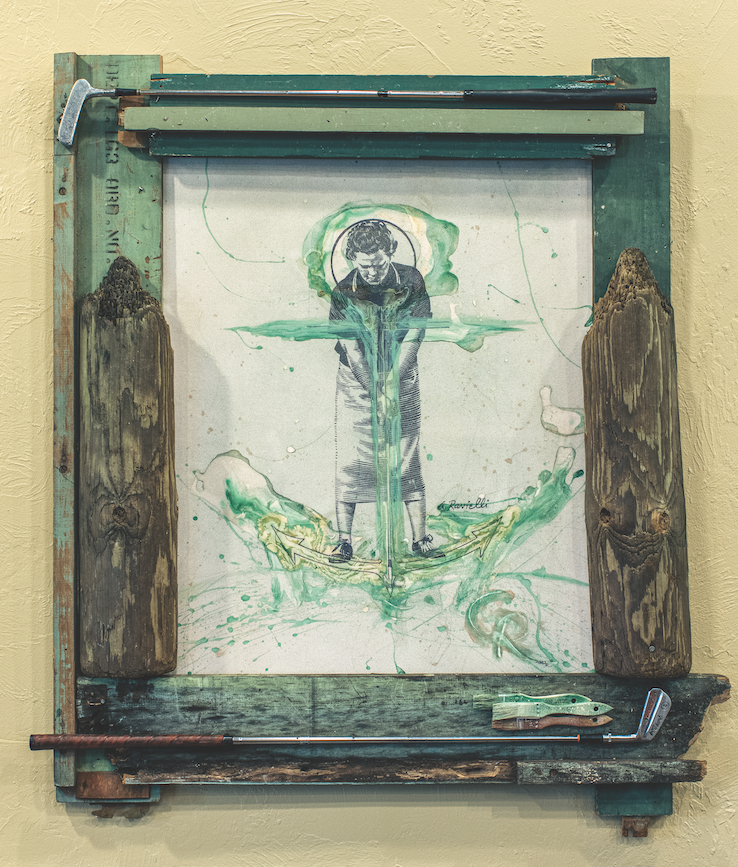 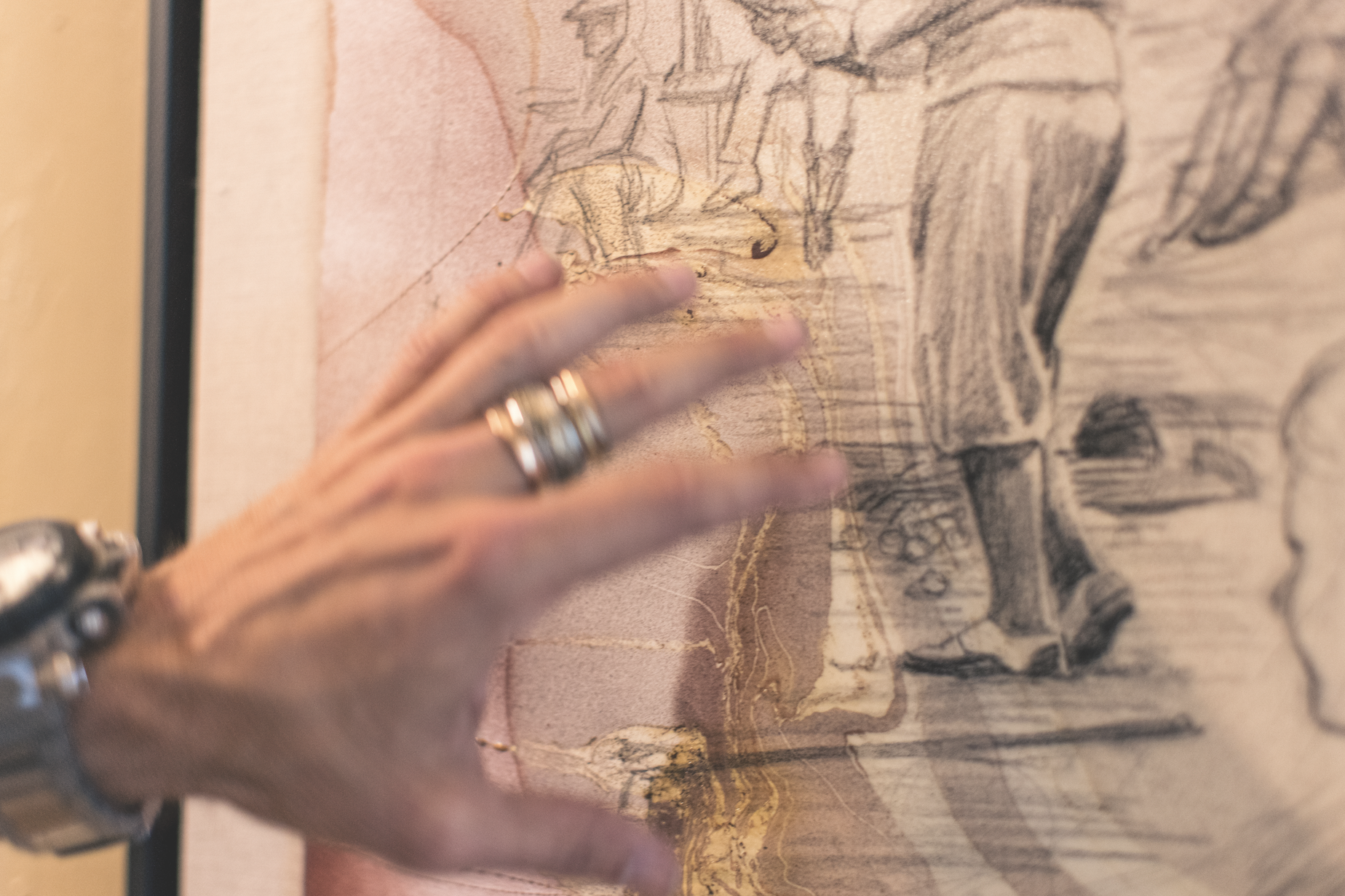 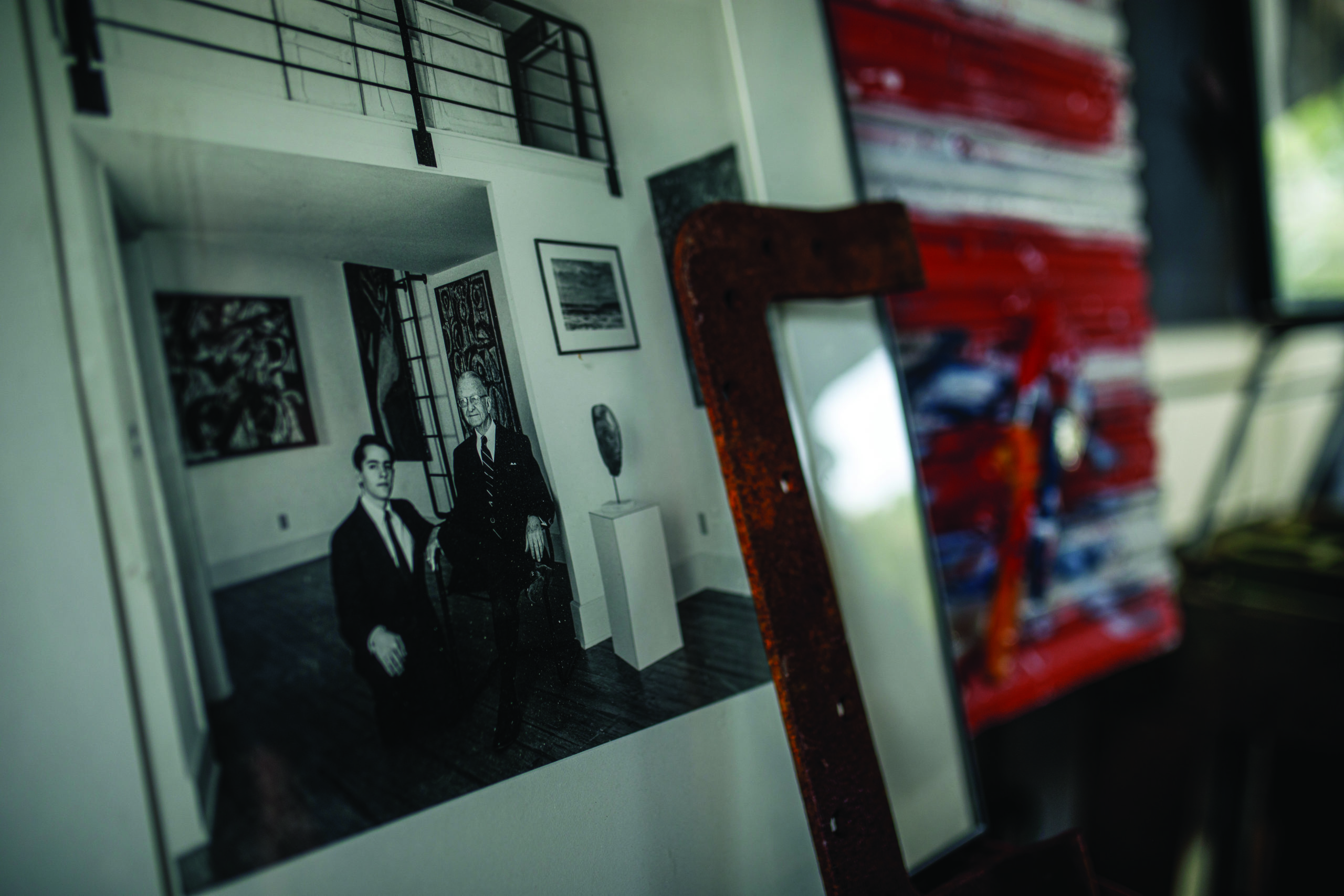