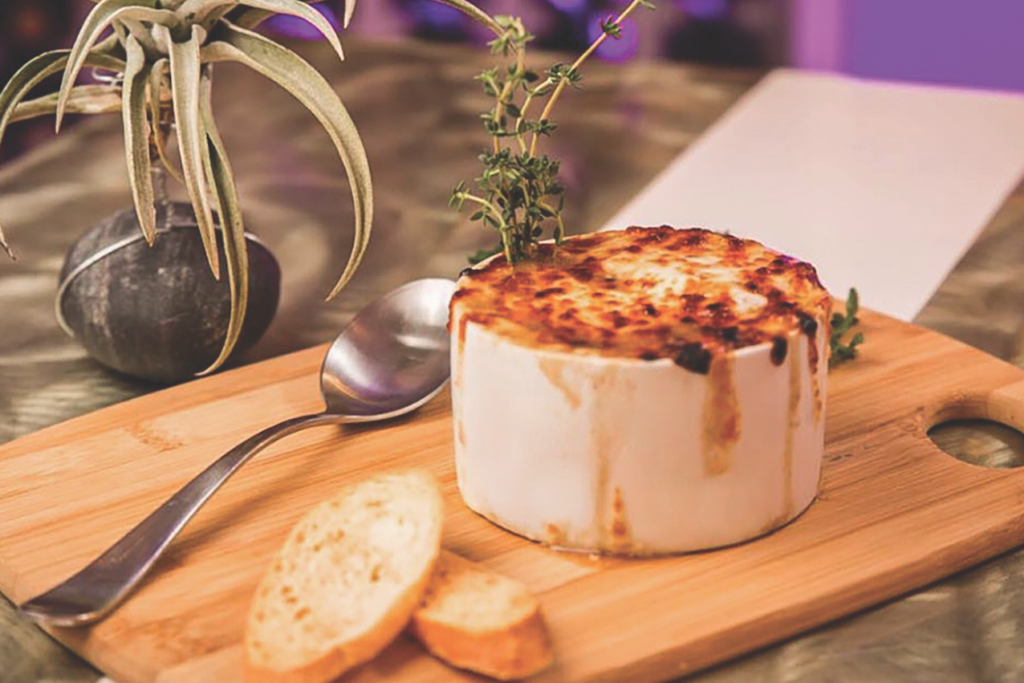 The chefs were wearing felt fedoras, all except chef-owner Jean Claude Rogé, who had pulled his long gray hair into a ponytail down his back. Tall and slim, he towers a head above his crew, his wrists beaded with bracelets, a pair of white-framed specs perched on his nose. He is a character, that’s apparent from the beginning, and the kitchen feels like a stage. Pull up a chair and a glass of wine, sit back and enjoy the show.

At any given moment, Rogé may perform a magic trick, banter with guests and staff or stop to explain, in his marked French accent, the metal artwork that lines the walls of his 30-seat restaurant in Fort Myers, named simply Blanc. The real magic comes through the flavors, though, and in the graceful way the four cooks squeeze and dance around each other in the tiny kitchen without ever colliding or uttering a cross word.

You have the option of sitting at one of the tables, but then you would miss the show. The 11 chairs at the chef’s counter are front-row seats to some of the best entertainment in town. Sure, you sit elbow-to-elbow with fellow diners as the waitstaff rushes behind you and speaks to you over your shoulder. At first, it may seem crowded and hectic, but soon enough you feel part of the action, and it’s exhilarating.

At one point, the woman next to me, until then a stranger, slipped me a bite of her exquisite Berkshire tomahawk pork chop with apricot demi-glace, one of seven entrees on the night’s specials menu. I traded her a tender chunk of my octopus, grilled on Blanc’s Japanese robata grill and served with sweet habanero sauce.

The octopus is part of the regular small plates menu. I ordered it as a follow-up to the proclaimed Best French Onion Soup. The name is no exaggeration. Rich, slightly thickened beef stock comes classically entangled with onions and blanketed with croutons and melted cheese. I didn’t lick the bowl, but not for lack of desire.

My husband, ‘Mr. I’m a Caesar Salad Expert’ (he makes a mean rendition), declared Rogé’s version perfectly balanced—neither lemon nor garlic overpowering the other ingredients—and topped with anchovies. From the specials, he ordered an Asian sea bass topped with jumbo shrimp and served with a lime, ginger and basil coulis atop a bed of spinach and sun-dried tomato risotto, cooked perfectly al dente.

From the small, superhot robata grill came delight after delight—a petit filet mignon with brandy peppercorn glaze, a side of Brussels sprouts in a sweet miso sauce with candied bacon, and a side of grilled corn with yuzu butter. Upon recommendation of my counter neighbor and our able server, we ended with the crème brûlée. Served chilled with a rustic layer of caramelized raw sugar, it was vanilla-laced, soft and creamy.

Every detail of our meal, like the chefs in the cramped kitchen, fit and worked together. And much like Rogé’s composed dishes, the decor within the space is artistic, with the white walls acting as another canvas for the artist-chef’s craft, with nods to the things he loves. More fedoras hang from wine bottles, jutting out from a plant wall at the back. There’s a white saxophone, mosaics and prints in metal frames that Rogé created himself, and a large mirrored mosaic lizard hugging the wall—the decorative ingredients all giving Blanc’s interior its distinct flavor. The chef’s counter juxtaposes a burnished metal bartop with retro cubes of glass along the top edge. Atop, small air plants sit on simple pedestals made from a smooth stone and twisted wire.

“I made everything,” Rogé says, pointing to the art and light fixtures, along with other elements of the  industrial-chic decor. Rogé, the sculptor, specializes in metal and wood. Rogé, the culinary artist, specializes in healthy cuisine based on his native France, with insertions of Asian and Mediterranean foodways.

He first brought his artful style of cooking to Southwest Florida in the 1990s, opening two previous restaurants with the late-chef Gerard Pinault: Village Café on Captiva Island and La Brasserie in Fort Myers. In 2016, he debuted Blanc to immediate critical acclaim. These days, in season, one must reserve at least a week in advance. “I had this concept in my head for a long time,” he says. “I designed it to achieve that concept and it became exactly as the vision was. As we go, we keep trying to get better and better, thanks to a great team. I treat it as a creative project, with food as the medium.”

Blanc succeeds as art on many levels: performance, visual, culinary and the art of making guests feel not only welcomed, but also included in something extraordinary.