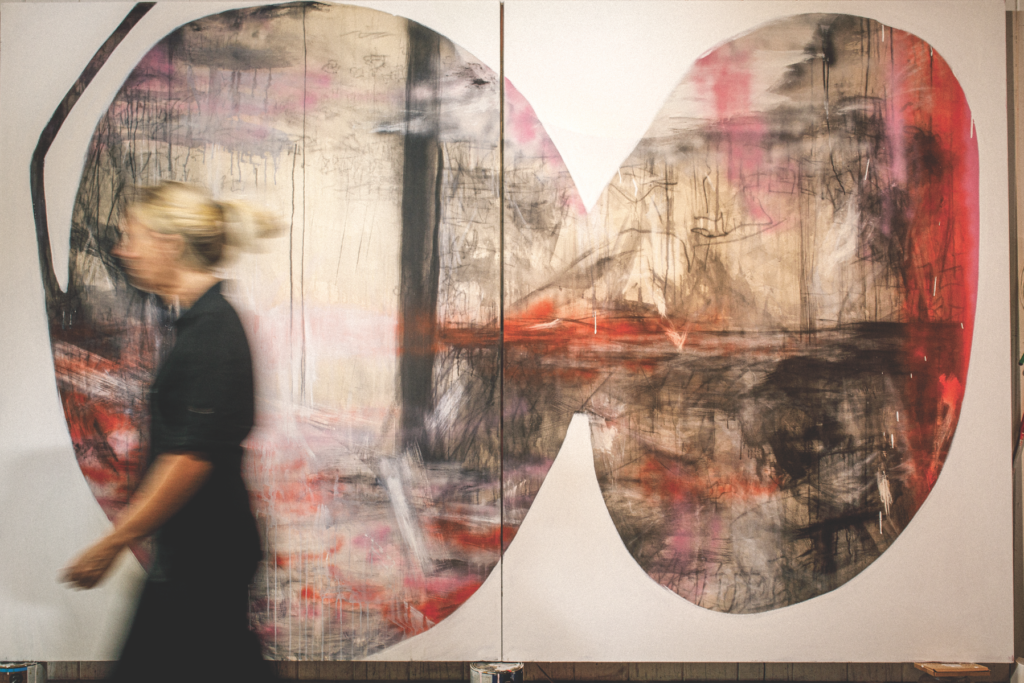 “It’s part of my process to be able to walk by a painting, and have something grab me and say, ‘You need to do this or you need to do that,’” Dana Roes says about her process. (Photography by Brian Tietz)

Starting in 2019, Fort Myers-based painter Dana Roes spent more than a year grappling with a series of large-scale, abstract paintings inspired by the climate crisis. “I was playing around, making little tweaks and changes,” Roes says. “It was OK, but I was really struggling to make it work.”

That all changed on January 6, 2021, the day that rioters descended on the U.S. Capitol building. As the chaotic images flashed on the television, Roes’ mind immediately went to The Burning of the Houses of Lords and Commons, a pair of oil paintings by 19th-century English artist William Turner depicting the fire that consumed London’s Houses of Parliament in 1834. “I saw a frightening parallel and a hopeful parallel,” Roes says. In his time, Turner had experienced the sweeping changes and environmental toll of the Industrial Revolution, and his expressionistic treatment of the light and color of the flames casts nature as a force of both sublime beauty and cruelty. “It seemed very significant to connect that moment in time to our own,” she says.

That connection to Turner’s concerns of nature and politics spurred Roes into action. She began incorporating his imagery—bright billowing flames over dark skies and reflected in the River Thames—and then layering in black abstract shapes across the length of the canvas. She refers to these washes of thinned black paint, longstanding features of her practice, as “voids” or “missing pieces.” Despite the fiery imagery and lack of humanity in the paintings, Roes describes the series, entitled Future Tense, as an inherently optimistic commentary on the relationship between mankind and the landscape. “People are noble at their best, but they’re horrific at their worst,” she says. “I feel like at no time has that been truer than right now.” 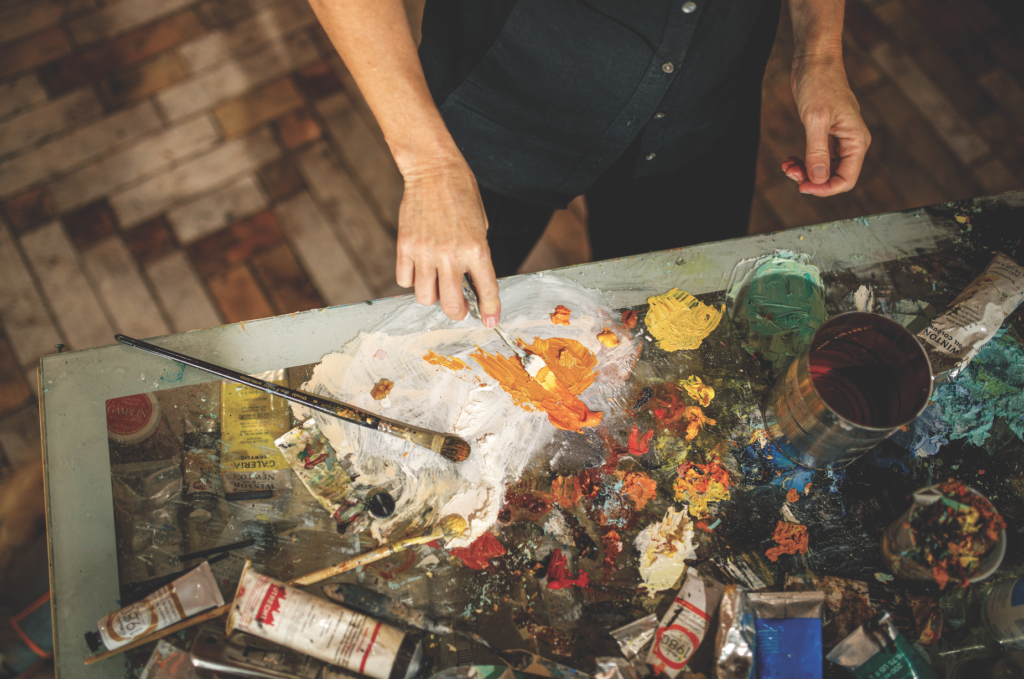 Roes has been studying the landscape—politically and artistically—since the early ’90s, exhibiting throughout the United States, Europe and Australia. Future Tense reveals the enduring challenges that come with creating abstract art. Even the most seasoned artists find that solutions tend to materialize in unexpected places. For Roes, that means living with her work is a must.  Back when she was an MFA student at the University of Pennsylvania, she illegally slept in her studio and took showers at the local gym. Today, she paints in the Fort Myers home that she shares with her wife, Wendy Chase. “It’s part of my process to be able to walk by a painting, and have something grab me and say, ‘You need to do this or you need to do that,’” Roes explains. “Making paintings, or any art, is like having a conversation. They talk to me. Sometimes they scream.”

When she’s not listening to her canvases, she’s listening to students, guiding them through the mysteries of their own art-making processes. Since 2009, she’s been an art professor at Florida SouthWestern State College, which is where she met Chase, a humanities professor. “I help my students tease out their ideas, digging and excavating beyond the most superficial interpretation to the essence of what they are,” Roes explains. “It’s a matter of seeing it to fruition, as in, ‘How will you make it? What materials do you think will suit it best?’” During the exploration of these ideas, Roes hopes that art becomes a means of expressing inherent truths about the human condition, along with revealing the hopes and anxieties her students may not have even realized are affecting them.

The lasting impact of Roes’ teaching is clear, both in the number of students’ weddings she’s attended through the years and by this summer’s group show at BIG ARTS on Sanibel Island featuring artwork by her former students that possesses an overarching sense of optimism. Whether her students go on to become professional artists or not is not the point. Roes says: “Creating art ultimately makes people better problem solvers, more sensitive communicators and more empathetic human beings.” 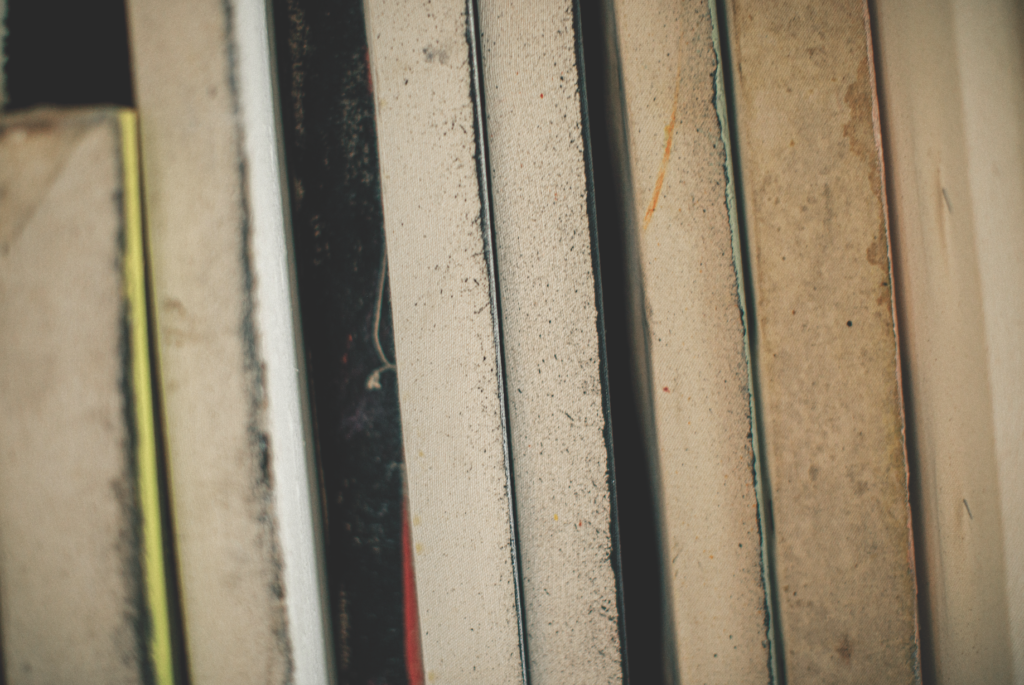