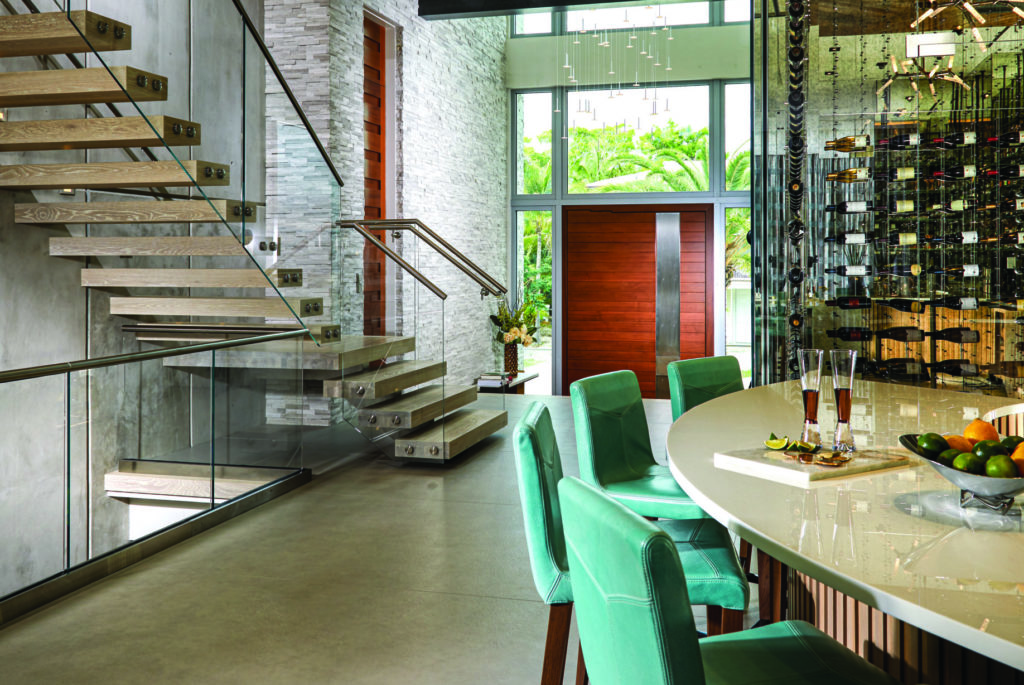 The 2005 build date comes as a surprise to most that step into this 9,505-square-foot home at 202 South Beach Drive on Marco Island. The Gulf-side compound is filled with contemporary details, like floor-to-ceiling windows, a floating glass and stainless steel staircase, a glossy kitchen with maroon cabinetry and crisp structural lines at every turn.

The one responsible for wielding this modern vision more than 15 years ago was the owner, who dreamt up most of the architectural blueprints and the interior design herself. “When she was building it, she was telling carpenters that she wanted this kind of feeling in this room,” Cathy Rogers, the listing agent with Premier Sotheby’s International Realty, says.

To ensure she had enough space for her dream home, the owner purchased the lot next door and tore down the existing house. This addition gave her a full acre of land with 180 feet of waterfront—a lot size that’s now considered a pipe dream in Southwest Florida, Rogers says.

Gripping views of the Gulf are visible stepping into the 30-foot-high foyer, which gives way to a grand entry hall and winding staircase that climbs each level to the third-floor gallery loft. Polished Crema Europa marble floors keep the space fresh and bright, an inviting segue to the great room upstairs. Framed in glass-paneled walls and clerestory windows, the great room stuns amid a backdrop of meticulous landscaping and lush palms. The owner brought in the outdoors in more ways than one: A floor-to-ceiling cylindrical aquarium commands attention in its space next to a wet bar complete with a wine cooler, refrigerator and custom inlaid aluminum cabinets.

The kitchen is outfitted with Wolf appliances and Poggenpohl cabinetry in a striking lacquered red and black palette. The stovetop is located on the island, with a ceiling-mounted hood. This shifts messy prep work to the counter, so guests can pull bar stools up to the island and observe the chef at work.

Rogers notes that the owner customized each of the five ensuite bedrooms and bathrooms, so no two are alike. One of the bathrooms, for example, has a pedestal sink in a red granite that Rogers says she’s “never seen before.”

If the owner’s refined taste in materials is enough to make prospective buyers  swoon, then the sunset and water views from the terrace off each room will have them falling in love. “She went first-class on everything,” Rogers says.

The property was listed at $14.25 million as of August.

Naples is coastal chic, but it’s certainly not Naples, Italy. Enter the ongoing shift to detuscanize homes, with the pillars and wrought iron railings popular 20 years ago coming down.

Such was the case with a 6,000-square-foot estate in Quail West. The owners recently called on Ruta Menaghlazi, the vice president of design for Theory Design, to help update the home. “They didn’t want to completely remove the architecture; it was more about cleaning up the finishes,” Menaghlazi says. The owners requested a blue and white palette, and brought images of Palm Beach-style homes as inspiration.

Theory Design set to work on the exterior, painting over the earthy bisque shade with a creamy white, squaring off the arched windows and swapping the ornate balcony railings for thinner, geometric ones.

Inside, the home had gold Venetian plaster walls and a soaring precast fireplace that Menaghlazi says “went to heaven.” She removed the concrete detail from the fireplace, added a black granite surround and rebuilt the mantle. To create visual interest on the now blank wall, Menaghlazi added wainscoting to create clean, intersecting lines that tie into the window frames.

She debated whether to remove the original tile flooring, which looked yellowed. After the team prepped the walls and applied a brighter white coat of paint, Menaghlazi saw that the tiles had been reflecting the Venetian plaster, making the interior seem darker. She opted to keep the tile in the great room, and added wide-plank oak flooring in the kitchen, sitting area and the surrounding rooms.

In the kitchen—which was previously beige and brown—she dipped into the owners’ desired color theme by adding an island and hood in a vibrant navy blue, and wrapped the perimeter of the space with light gray cabinets by Distinctive Kitchen Studio. The wet bar underwent a similar change, with blue, glass-fronted cabinets and gold hardware for an elegant touch.

In the study, Menaghlazi had to work around two full walls of dark wood built-ins and a coffered ceiling. She repainted the built-ins with the same dark blue used in the kitchen, coated the ceiling in white, and incorporated a gray-and-blue plaid wall covering at one end to complement the room’s new colors.

In the end, Menaghlazi delivered a fresh look while working with the home’s original footprint, a feat she accomplished by keeping out elements that could look foreign in the space. “I made a deliberate effort in choosing the design features to make it look like they had always been part of the house,” she says.

When the owner of a Fort Myers Beach marina called on Freestyle Interiors to give his nearby home an ultramodern flair, he wanted the space to convey an immediate sense of place with a striking entryway. To achieve that, Faith Fix, founder and principal of the firm, started by installing a mahogany front door with a center pivot for a bold entrance. Just beyond, a glass walkway leads up to the landing, where 6-foot-long Blackbody pendant lights cascade overhead, giving it “almost a feeling of starlight,” Fix says.

Floating steps with a glass balustrade allow for sightlines to the Gulf view in the back of the home. And on the left hand side, a glass-enclosed wine room houses around 350 bottles, while a bar, wrapped in slatted oak, and sea green bar stools, nod to Old Florida interiors. The inspiration: “Modern, but thinking of a boat,” Fix says. Welcome to the new age of nautical design.