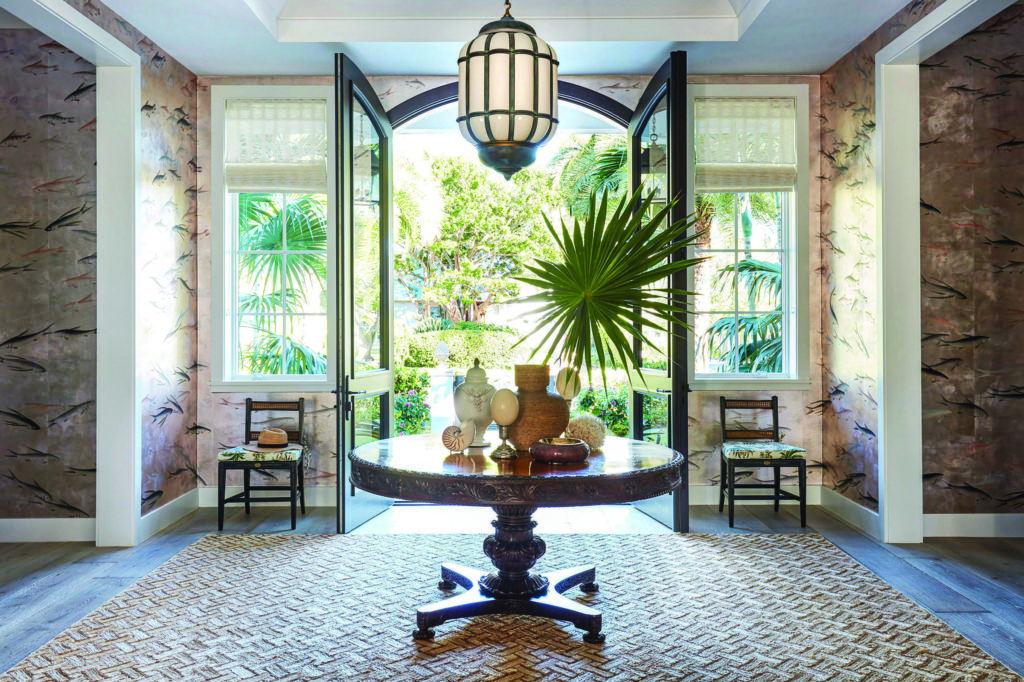 The home epitomizes the return of more-is-more maximalist design with traditional styling and layering of playful details, like the de Gournay Fishes wallpaper around the entryway.
Interior design: Summer Thornton
Photography: Thomas Loof

Summer Thornton can do beige walls, but why would she? Based in Chicago, the interior designer has built her reputation on her more-is-more approach to design. Her ability to artfully pile on patterns, layer in finely appointed furnishings and balance an abundance of color, has earned her accolades well beyond the Windy City. Her projects have appeared in national publications like The New York Times, Veranda and Architectural Digest, and her eponymous company was named one of the 50 best firms in the world by 1stDibs. Thornton is one of a few designers today who make the art of maximizing mixing look so easy, and she credits a lot of that to her loyalty to levity. “The key is finding a way to create maximalist moments that don’t feel heavy,” she says. “I’m typically trying to weave in moments of whimsy, humor and joy. When you achieve that, everything comes together and feels airy, lighthearted and fresh.”

The designer’s dedication to fun—along with her unique take on form and function—made her the perfect choice for a Chicago-based couple looking to beautify their bland, 6,000-square-foot spec home in Old Naples. While the sprawling floorplan made it ideal for entertaining a cavalcade of extended family throughout the year, the gray walls and absence of any interesting architectural elements was all wrong. Thornton says she stepped in with the goal of blending the colonial design with equal parts traditionalism and freshness. She also wanted it to better reflect the homeowners’ personalities. “That was important to bring out in the design—their passion for life and joy of entertaining and sharing with the people in their lives,” Thornton says. “They are very generous people and have such positive energy.”

While the couple has generosity in common, they came to the project with very different tastes. The husband enjoys British Colonial style, while his better half is drawn to a more coastal, nautical design. Ever the problem solver, Thornton made them both work. “The house is a blend. I definitely think it leans very traditional, but it has a light hand to it,” she says. “It still feels very vacationy. I see my designs as primarily experiential. I’m focused on creating a mood, a feeling, a way of living that takes my client’s daily living experience to something beyond reality. It’s an escape from normalcy.”

To that end, there’s nothing ho-hum about any of the wallpapers that Thornton chose, starting with the whimsical pattern that hangs in the entry. “The fish wallpaper by de Gournay was a must for me,” she says. “It’s highly reflective, and was a way to immediately transport people into this vacation fantasy world.” Instead of blending it with formal details, like marble floors, which she says would feel too serious, the designer layered in more laid-back rattan and rustic wood details.

Wall coverings, deployed on every surface she could, also help combat the lack of delineation in the open-concept house. “It adds instant warmth and texture,” she says. In the main living room, Thornton papered the walls in a textured straw-like woven covering, which extends up the stairs and through the hallways, creating a sophisticated neutral backdrop. “There isn’t any bare drywall in the house,” Thornton says with a laugh. She also commissioned several murals throughout the home. 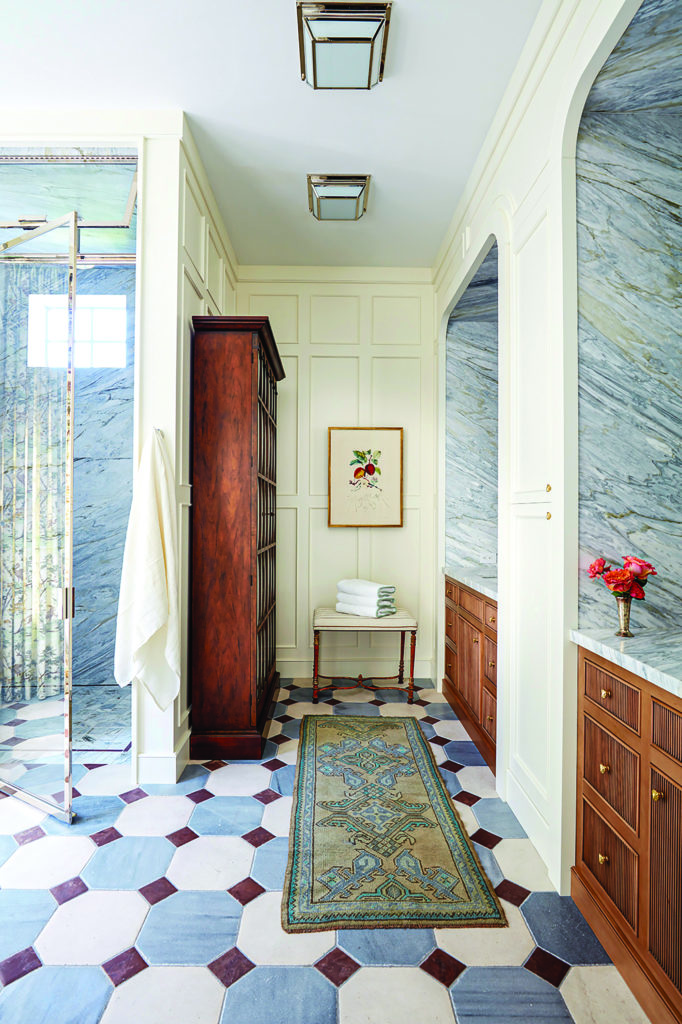 The designer credits the tropical palette with helping to create a paradisiacal setting. After noting that the couple gravitated toward yellows, Thornton ran with it, adding complementary shades inspired by Florida’s plentiful produce. “We landed on this citrus vibe with lime green, lemon yellow and grapefruit orange,” she explains, although there is one spot in the house that was designated as more business than pleasure: the home office. There, Thornton traded wallpaper for wood paneling and implemented a darker, richer palette. “It’s a touch more serious, so we went with a richer color,” she says. “We designed this room to help get him in business mode when needed, but it’s still stylish, and it works well with the rest of the house.”

The once-boring kitchen got a major makeover starting with de Gournay’s hand-painted Sans Souci wallpaper, featuring a fantastical pattern, that was applied as a backsplash and covered with glass. “That was the beginning, and then we wanted to mix in wood tones,” Thornton says. “We don’t believe in the all-white kitchen.” An array of warm materials includes wood floors, a walnut island, painted perimeter cabinetry and white oak cabinetry with latticed fronts that disguise the pantry and appliances. 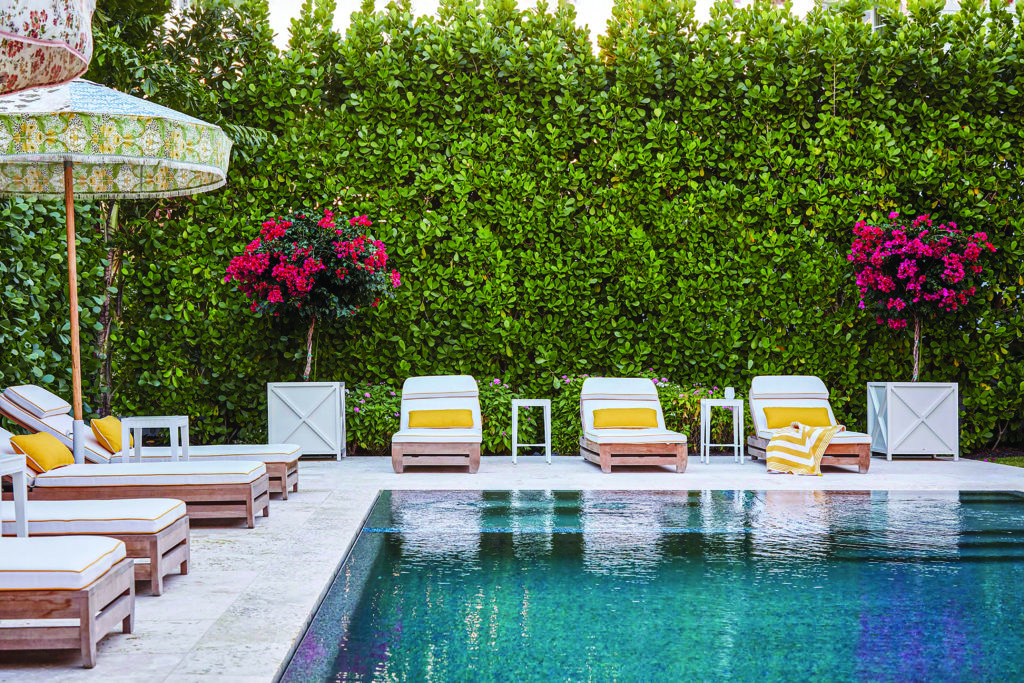 In the primary bathroom, Thornton wanted the look of antique tiles, so she installed Paris Ceramics flooring to set the mood for the restorative retreat. Special niches were built out to house the bathroom’s oak vanities, which are embellished with reeded oak door panels. It’s an aesthetic that is both traditional and current. “We have traditional applied moldings, reeded millwork, a traditional soaking tub and brass shell hardware—all very traditional design elements,” she notes. “But there is a modern approach to the traditional design that feels very airy and different.”

Guests also get a whimsical retreat when they visit, as Thornton transformed the space above the garage into a cabana-themed bunk room. “That was formerly just a big white space,” Thornton says. “It was indoor-outdoor carpet and white paint, and that was it.” She had three trundle beds built; covered the walls in a Farrow & Ball custom green striped wallpaper; and added drapes for warmth and privacy. Each bedside now includes a sconce, charging station and built-ins that feature narrow close and under-bed drawers.

In true Florida fashion, a hallmark of the home is the blurring of the lines between indoor and outdoor living. Thornton achieved that via an abundance of graphic, colorful upholstery and furnishings that feature extra special embellishments and details. All those little touches come together to create a very definite sense of place and time. “The parasols around the pool are a quirky shape and made of vintage fabrics. We chose them because they add whimsy and playfulness,” she says. “We also source lots of antiques and vintage pieces, and they help ensure that no project ever looks like something out of a showroom or catalog. It all feels collected over time.” A common goal for the designer throughout her work: When you look at the home, you can’t tell when it was designed. “It will still look fresh in 15 years because it’s truly collected from around the world and from a variety of eras.”