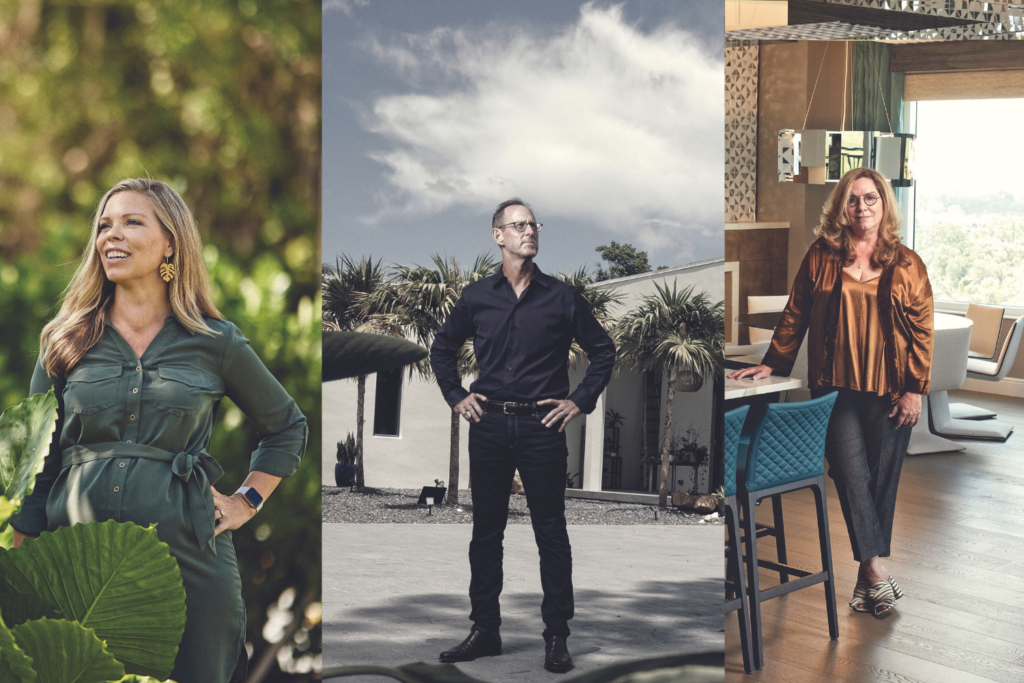 “I’ve never felt architects should talk a lot,” David Poorman says. “I tend to think they should let their designs do the talking for them.” Based on his work, the Naples architect is a master conversationalist. A model of restraint, his homes tend to evoke a sense of serenity. “Less is more is cliche, but it’s true,” Poorman asserts. “There’s no reason for me to add all this stuff—I don’t like to ‘decorate.’”

But don’t mistake his mission for functional clarity as boring—his work is often very sculptural and Zen-like, designed in perfect harmony with the setting. “I don’t do the same thing twice,” he says. That can be difficult when potential clients who’ve seen one of his creations come calling for a duplicate on their lot. “They’re not going to get that exact house,” says Poorman, who grew up in Naples, before moving away for college and eventually settling in Chicago for 10 years before returning to Florida. “Even if someone comes to me wanting something ‘modern,’ they presumably have ideas for a feeling they’re going after … All that is naturally going to be a unique reflection of who they are and, therefore, something I could never replicate.”

For Poorman, who has long been inspired by Japanese architecture, each home is a singular creation that blends the owners’ wants, along with the needs of the site in terms of optimizing access to natural light, the flow of air and views that create moments of reflection, contentment and wonder—all wrapped into a sculptural frame. Poorman even creates old-school 3D models of the homes to help clients understand the scale and proportion. “It’s all very personal,” he says. “For both me and, hopefully, them.”

Interior designer Jenny Provost is comfortable breaking rules because she’s taken the time to learn all of them first. Understanding architecture better than many designers, she works both big picture, creating full construction drawings, and in detail, planning complex millwork. “After 30 years in the business, I have enough proof that if a client believes in me, we’re going to pull off almost anything,” she says. Provost cut her teeth in the design business in Montreal, working on centuries-old stone homes with bespoke wainscoting and paneled libraries. “Even though 80% of my work now is very modern, I still like to bring that substantial feeling that comes with a completely finished, well-aged room. Only now, I do it with lacquered panels and exotic veneers,” she says. “I’m also absolutely mad about ceiling design.”

Since relocating to Bonita Springs and opening her design firm, K2 Design Group, many of her projects have won acclaim, including her own Naples home, which is outfitted with a mix of design- and ecologically forward features, including a new type of wall surfacing that achieves the smoothest, highest-level finish possible without all the work that typically entails engineered wood floors; Low E glass for impact-rated doors and windows; and a 6-foot-long blue Lagos sink carved out of a single block of limestone.

Provost likes to push the limits on what’s possible for design—like the time she worked with a company that builds sets for Disney World to make a thermoformed, curvilinear outdoor kitchen and bar that resembles the ocean’s waves. That same Cape Coral Caloosahatchee River home also features an infinity-edge pool with a swim-up bar, a nearby fire pit and cascading water to appeal to the mariner homeowners. In Marco Island, she got creative in disguising an entertainment center by working with photographer Doug Thompson on an Everglades mural that serves as a screen and provides a sense of place.

And she’s still at it—currently hard at work bringing a 1990s-era Quail West House into the 2020s, crafting a modern wonder in Royal Harbor, and “making lots of concrete boxes in the sky feel like real homes.” For Provost, the constant learning curve is one of the perks of the job: “Good design takes time, investigation, research, tenacity and a willingness to take risks.”

Leigh Gevelinger is equally devoted to innovative design and sustainability. “I get to work in this incredible place shaped by water, wind and the sun,” she says. “Resilience isn’t some vague concept. We see the impacts of our harsh coastal environment every day, and we use plants to fix those problems.” With projects in some of the best neighborhoods across Southwest Florida, her Sanibel-based firm, Coastal Vista Design, focuses on incorporating a mix of native species along with Caribbean and subtropical plants to create lasting landscapes that enhance biodiversity.

But her mission to strengthen and stabilize the environment isn’t focused solely in residential areas. Her firm is also invested in beautifying numerous public space projects including the new BIG ARTS campus and the Bailey-Matthews National Shell Museum on Sanibel Island, and the Paradise coast Sports Complex in Naples.

A painter in her spare time, Gevelinger says the key to coming up with interesting landscape architecture is applying art to the environment. At the moment, she’s turning that discerning eye to the grounds of a public high school, university housing and some residential gardens in progress in Sanibel and Captiva. “I’m arms-deep in plans for a private botanical garden with coral rock features, groves of flowering trees and a garden specifically designed to look good by moonlight,” she says. Gevelinger is mom to a 2-year-old and is expecting twins this fall, but don’t expect that to slow her down.  “Every day, I can see that our work has a direct impact on the quality of our surroundings.” 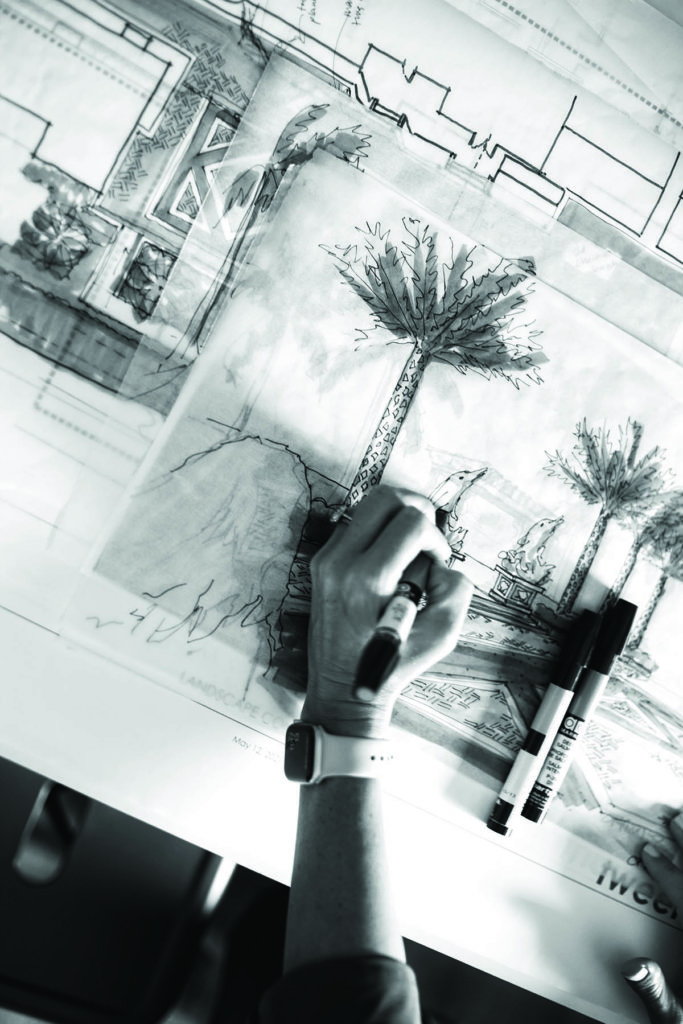 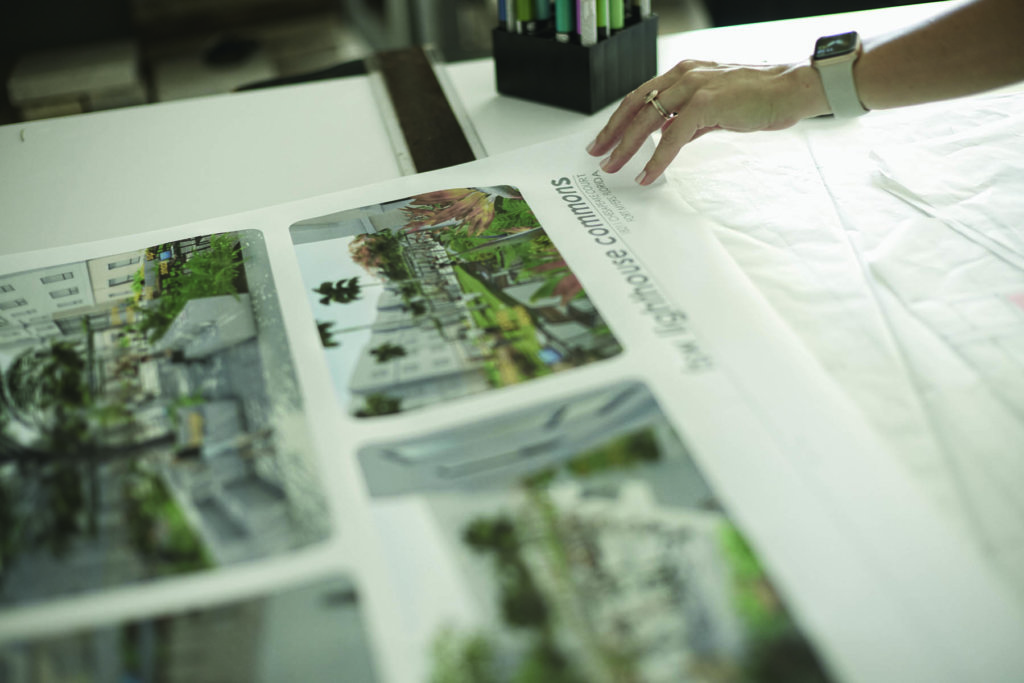