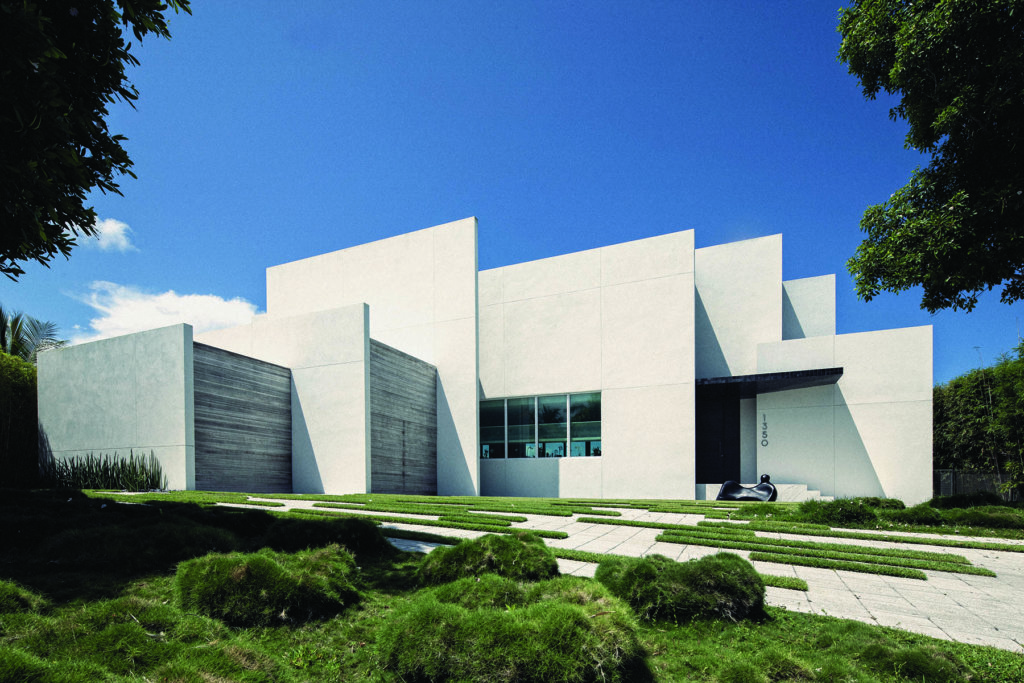 In 2003, when Rebecca and Nancy Maddox found their waterfront property in Naples’ Royal Harbor neighborhood, they were sold on the Naples Bay location, the views and the boat access. They were less than tickled pink, however, by the very pink, very ‘Florida’ architectural style of the existing house on the lot. But rather than make any rash decisions, the couple bided their time and searched for just the right person to lead a makeover. Enter Naples-based architect David Poorman. Because he grew up in Naples, he knows the lay of the land better than most. But Poorman also studied at Princeton University and spent more than a decade in Chicago, building a reputation for his contemporary designs. He eventually returned to his hometown, determined to bring his brand of well-done modern architecture to the region.

When he initially met with the Maddoxes, the couple had decided they could only take on a renovation. Poorman worked with them to create a plan that enhanced the pink palace’s positives and eradicated most of the negatives. Turns out, it wasn’t enough. “We weren’t even a year into the project before Nancy and Rebecca decided we had to tear it down and build something brand new,” Poorman says with a laugh.

Starting from scratch meant that Nancy and Rebecca could put together a list of their nonnegotiables. First up: clean design, which was right in Poorman’s wheelhouse. “We wanted something modern and uncluttered that offered a lot of outside living,” Rebecca says. As the owners of Three60 Market & Wine, the two love to entertain, so they needed space to gather around a grand piano, a large and open chef’s kitchen, multiple sitting areas and a place to store plenty of wine.

While they love having people over, they weren’t so sure they needed to carve out a lot of room for guest quarters. “We were interested in quality, not quantity [when it came to square footage]. We like to be different and unpredictable,” Rebecca says. They ultimately decided to skip the guest room altogether, and instead added a gym and an office. “The style of the home was entirely based on how they wanted to live day-to-day,” Poorman says. “They decided they wanted a one-bedroom home, so that’s what we did. It was fun—they were completely disinterested in doing anything just for resale value.”

Although confident in their vision, Rebecca and Nancy were initially nervous. This was their first big construction project, after all, but they put their faith in Poorman to deliver a contemporary masterpiece with maximal views. His commitment to details goes way beyond cantilevered floor-to-ceiling doors and windows. Seamlessly marrying the indoors and outdoors,  glossy and matte porcelain flooring meet in the identical size and color on the lanai and a tiled ceiling in the powder bath is replicated with the same tile directly above on the roof deck. Poorman worked with an engineer to create camouflaged garage doors. “Sometimes the garage doors tend to swallow a house,” he says. “But here, they enhance it. They were the genesis for the wood panel system we ended up using for the entire facade.” There’s even a nod to the old pink palace via a hot pink wall that extends from a sitting area into the outdoor kitchen. “When that first came up, I was partly joking. We showed it to them on a rendering, and Nancy said, ‘Yeah, let’s do that,’” Poorman says. “What I love about it is, you don’t see it from the front. It’s a real surprise.”

Naples-bred, Sarasota-based landscape architect David Young delivered an equally modern and stunning environment to complement Poorman’s facade, which features windowless walls between sinker cypress wood panels, which create contrast and the feeling of these “cool white floating privacy screens,” the architect says. Young designed a grass-laced driveway (to break up the expanse of hardscape, while slowing the flow of stormwater), a canopy that casts dramatic shadows throughout the day and a reflecting pool that creates a connection with the Naples Bay behind the home.

Once construction was complete, the Maddoxes turned to neighbor and designer Kenneth Mabe for collaboration on the interiors. The goal: Outfit the home with pieces that honored the architecture and the views of the bay but still made an impact all on their own. “My mother had a word she liked to use—sprezzatura—a nonchalance that makes things appear effortless,” Mabe says. “It’s a casual elegance that puts everyone at ease.” To achieve that balance, Mabe mixed in an assortment of vintage and new furniture, along with artwork he hunted down at galleries and auction houses in Palm Beach and at Dovetails LLC in Naples.

At the end of the 15-month project, the Maddoxes say they couldn’t be more thrilled with the result. “We don’t have a single regret. We love this home. We invested the time working together, and I think that makes a huge difference,” Rebecca says. On any given night, a bevy of folks are gathered around the generous island watching her cook. And while they may not have a spot for sleepovers, guests never complain thanks in part to the well-stocked wine room just off the kitchen. “It probably holds around 800 to 1,000 bottles—I’ve never counted,” she says. “We love when friends go in and select what we should drink that night. They’re always like kids in a candy store.”