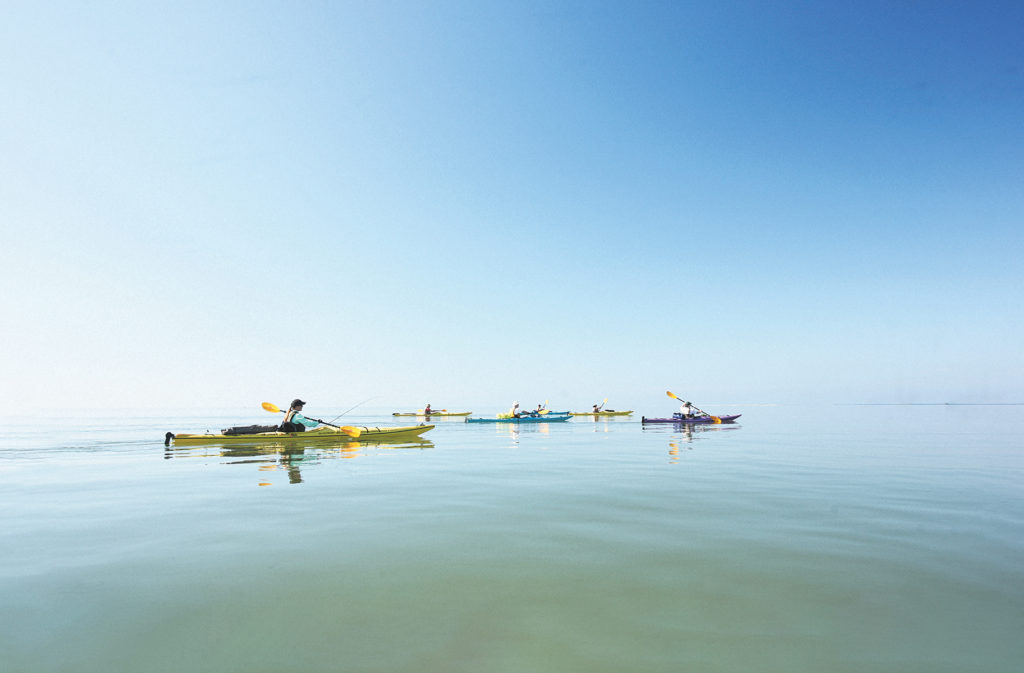 Paddle a kayak through Ten Thousand Islands National Wildlife Refuge, a 35,000-acre expanse of mangrove and marsh habitats home to abundant wildlife like manatees and osprey. (Photo by Zach Stovall)

Shopping, dining, golfing, beaching, watersports and the arts: Naples excels at all the major vacation wants. You won’t be able to fit it all into one day, but if you’re strategic, there’s a lot you can see and do, starting with a morning celebrating the great outdoors—whether that’s with a round of golf at the highly respected Tiburón Golf Club at The Ritz-Carlton Golf Resort, Naples, or a visit to Delnor-Wiggins Pass State Park, in central Naples, for fishing, kayaking on the clear waters or just lazing on alabaster sands. If you choose the beach, take a break from the water without leaving the sand at nearby The Turtle Club for lunch in a time-honored seafood house. Start off with the famous Oysters Turtlefeller. Later, the afternoon calls for shopping on famed Fifth Avenue South and a caffeine pick-me-up at 5th Avenue Coffee Company & 6th Street Diner. About 10 minutes away, duck into the Naples Art District for a hit of culture at the dozens of galleries and creative spaces off Shirley Street. Plan to head back downtown for dinner at Sea Salt for Venetian-inspired seafood. For nightlife, North Naples offers everything from Broadway shows at Artis–Naples to the clubs at Mercato shopping and dining complex. The next day, have breakfast beachside at BALEEN at La Playa Beach & Golf Resort, with a view of the Gulf and decadent brioche French toast.

The wilderness of the Everglades and Ten Thousand Islands dwells in a time and place where alligators, birds and other wildlife thrive and life is far removed from modern tempos. Base your nature-centric day in Everglades City, a sliver of a town that feels like the end of the earth. Here, it’s all about getting on the water and among the maze of mangrove-dotted islands. You can join an Everglades National Park boat tour from the visitor center, or ride a zippy airboat through the so-called River of Grass. For something more tailor-made for your crew, arrange with Everglades Adventures for an airboat or kayak tour–or both. Once you’ve worked up an appetite, go for some authentic ’Glades fare (think gator tail and stone crab) at the quirkily decorated Camellia Street Grill, on the water. Follow that up with a drive east along Tamiami Trail into Big Cypress National Preserve. Stop at Nathaniel P. Reed Visitor Center, the nation’s smallest post office and Clyde Butcher’s Big Cypress Gallery. In case you haven’t spotted any gators by now (though they are practically guaranteed on airboat tours) head to the Oasis Visitor Center, where the creatures lurk in numbers in the waterway out front, and exhibits introduce you to what else awaits in the vast preserve that reflects the very fiber of South Florida and its genesis.

Marco Island is sophisticated like neighboring Naples, but its proximity to Ten Thousand Islands gives it a wilder spin. Rise for an early-morning sightseeing private boat charter with Breakwater Adventures out of Caxambas Pass Park & Marina. Time appears to stand still in the old fishing village of Goodland, where you can find a knowledgeable fishing guide. Back in Marco, at Rose Marina, the Dolphin Explorer takes you on a cruise that is part pleasure, part wildlife research and scientific mission searching for sea creatures. After lunch on the water at CJ’s on the Bay, get out of the sun and visit the Marco Island Historical Museum. It showcases the island’s importance to the ancient Calusa Indians, with life-sized vignettes and rare exhibits on loan from the Smithsonian Institution. Watch the birds and manatees and scour for seashells at Tigertail Beach, or rent a kayak or paddleboard to ply the calm waters. For a lively dinner, make your way to The Oyster Society, where the raw bar, cocktails and ambiance are all elevated.

One Day in Sanibel & Captiva Islands

These neighboring islands are known for their spectacular shelling and natural demeanor. You can pick up provisions at Bailey’s General Store, a third-generation market with an excellent wine program. From there, the most secluded place to prop your umbrella, Bowman’s Beach, is credited with having the best seashells, especially at low tide. Get there early before the spoils get picked over, then head down the road to Sanibel’s greatest treasure, the J.N. “Ding” Darling National Wildlife Refuge—nearly 6,500 acres of wetlands that are teeming with birds and other wildlife. Visit the interactive exhibits at the free Visitor & Education Center for an easy-to-digest tutorial on the local ecosystem; then drive, bike, hike or take a tram tour of the four-mile Wildlife Drive, which has several offshoot trails to explore. For lunch, head down the road to 400 Rabbits for a Mexican-themed feast and craft margaritas, then drive the leisurely three-mile road to Captiva Island, which has captivating views of the sea and riotous vegetation. Park your car at Chadwick’s Square, then shop and discover the quirky “downtown” by foot, pausing at Captiva Chapel by the Sea and its pioneer-era cemetery; Captiva Memorial Library and its old mailboat-motif history display; and Boops By The Bubble Room for a croissant or pastry in an antique setting. End the day on a sunset sailing excursion with Captiva Cruises or watch the birds come to roost on a nature boat tour back on Sanibel Island with Tarpon Bay Explorers. Once you’ve worked up an appetite, drive along Sanibel’s Gulf Drive for a beachfront dinner at Thistle Lodge in the Casa Ybel Resort.

Out and about in Boca Grande

Built up in the early 1900s by the railroad and wealthy industrialists, the historic town of Boca Grande on Gasparilla Island retains an air of off-the-beaten path privilege. To trace the very route of its railroad roots, rent a bike or golf cart from Gasparilla Adventures and follow the paved, seven-mile trail that stretches tip-to-tip across the island. Pause at The Inn Bakery for homemade pastries and coffee. As you make your way toward the island’s south end, veer off on Park Avenue for one-of-a-kind shopping, and Banyan Street, where you’ll ride beneath a canopy of its enormous shade trees. Cycle alongside beachscapes to Gasparilla Island State Park and the Port Boca Grande Lighthouse & Museum. Here, you can learn more about the island’s past as a phosphate shipping port and reputation for tarpon fishing in Boca Grande Pass at the park’s end. As you head back to town, pause for a beachside lunch at South Beach Bar & Grille. Look for historic churches on side streets, and stop for homemade ice cream at The Loose Caboose, housed in the historic railroad depot. Make sure to budget time for a visit to historic Gasparilla Inn, where the DuPonts, Rockefellers and J.P. Morgan once stayed.

Fort Myers with an Agenda

Start the day with a dose of culture in downtown’s River District, where history lives in the form of turn-of-the-century architecture and attractions like the Edison and Ford Winter Estates, where you can tour the magnates’ historic homes, riverside gardens and Edison’s laboratory. To stick to the historic vein, take a seat for a Southern-inspired lunch in the two 20th-century homes that comprise The Veranda restaurant. Then, stroll downtown streets for shopping and sipping. Don’t miss The Franklin Shops for a delightful mini-mall of art, clothing and home accessories. If time allows, score a hands-on lesson at IMAG History & Science Center before you head to Fort Myers Beach for sunset and, if you wish, rowdy nightlife. The lively scene starts front and center at the Fort Myers Beach Fishing Pier with a nightly celebration of the sun’s glorious curtain call. Or, plan a drive south to quieter Lovers Key State Park and catch your sunset show from Flippers on the Bay restaurant, where dolphin sightings and a bounty of seafood (check out the paella) are highlights. After nightfall, music and dancing take place around the pier at Times Square. Celebrate from the rooftop of The Whale or pop into a bar around the pedestrian zone and along Old San Carlos Boulevard. The next morning, plan on having a leisurely breakfast at Heavenly Biscuit, a local tradition for sinful cinnamon rolls and, of course, biscuits. 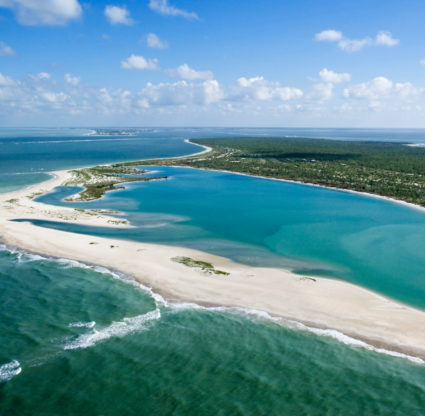 Find your perfect slice of sand along our sparkling coasts; you’ll leave spellbound. 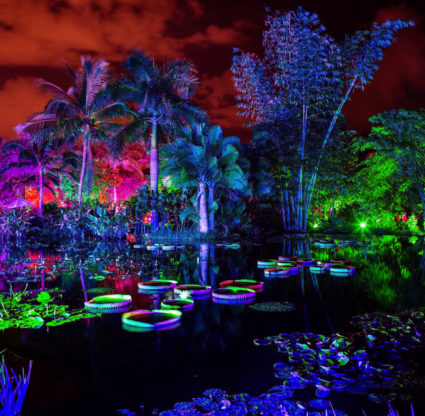 From historic homes to dolphin tours to swamp safaris, the region offers visitors a nearly endless itinerary. We’ve narrowed down some of the best ways to spend a perfect day in paradise. 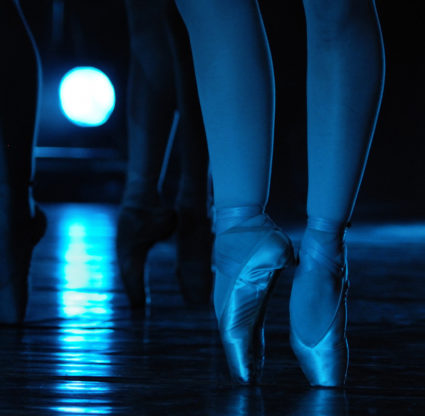 Top Events from September to May

From Broadway plays to food festivals to interactive exhibits, this year brings a slate of must-see happenings in Collier, Lee and Charlotte Counties. 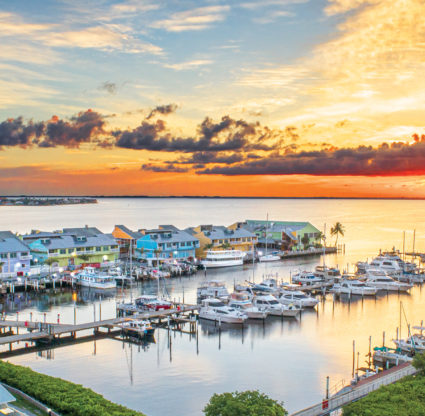