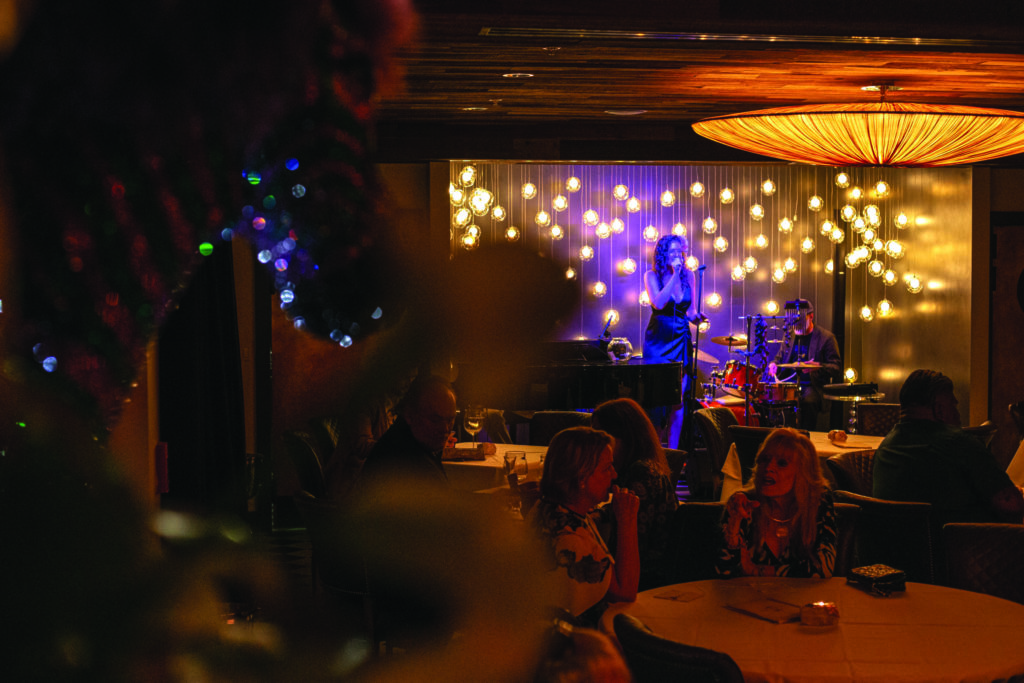 While dinner is an experience at many fine restaurants across the region, some locales take it up a notch by engaging the five senses. At these hospitality empires-meet-music-venues, live jazz, piano, country or blues is the main course, giving dinner and a show marquee billing.

The Club Room at Campiello

Entering through a hallway adorned with a cheeky Princess Diana installation at The London Club at Bellasera Resort, diners feel as if they’ve stepped into a big-city underground jazz club. High-back u-shaped booths along the back wall offer a feeling of privacy, while rows of tables are positioned closer to the stage where a red velvet curtain serves as the backdrop. The room is accented with metallic pendant lights and gold-framed mirrors. “We wanted a look that wasn’t stereotypically Naples,” says Peter Tierney, who owns Bellasera with business partner Dr. Bud Negley.

The London Club, which opened in 2019, is part dining experience and part jazz club, offering two nightly seatings, each featuring different musicians, like renowned jazz vocalists Carter Calvert and composer Neil Berg and Broadway talent Danny Zolli and Alex Santoriello. The acoustics were methodically planned. “We put a lot of effort into the design, placing the stage in the middle of the room and balancing the sound so very little amplification is needed,” Tierney says. To accompany the night’s live music, towers of chilled lobster, Gulf shrimp, and East and West Coast oysters are whisked upstairs from The Claw Bar, Bellasera’s stylish seafood restaurant. Nearly 30 wines are poured by the glass including Reverie Hall, Tierney’s private label cabernet franc rosé produced in Mendoza, Argentina.

When Ben Allen made the top five on season 19 of The Voice, NBC’s popular singing competition, the rest of the country discovered a talent that many locals already knew, including Todd Brooks. The restaurateur met Allen shortly after founding Brooks Burgers in 2010. “He was singing at a cabana bar and I hunted him down to play in our restaurants,” Brooks says. In June, their decade-long friendship turned into a business partnership with the rebranding of Brooks Burgers’ East Naples location into Ben Allen’s Backyard, combining the men’s restaurant knowledge and entertainment savvy.

While The Club Room and London Club go jazzy and sultry, Ben Allen’s Backyard is pure Americana and laid-back rollicking fun. The outdoor space is anchored by a stage, surrounded by bistro lights, firepit tables and a bar. A second stage is located inside the restaurant, and an integrated audiovisual system allows music lovers to see and hear the action wherever they sit. The menu features eight of Brooks’ most popular burgers, from-scratch comfort food, 24 beers on tap and even more whiskies, some of which are mixed into decadent milkshakes.

Allen plans to take the stage numerous times a year and Brooks says, “You never know when he might stop by. Even on a Monday when it’s open mic.” Allen recently shared the stage with songwriters Gary Hannan and Wynn Varble, who have written hits for country superstars Blake Shelton, Garth Brooks, Willie Nelson and Brad Paisley. He’s also wooing fellow contestants from The Voice to come play informal acoustic sets and energetic concerts in his “backyard.”

When Steve Hollister and his wife, Denise, opened Twisted Vine Bistro in downtown Fort Myers 10 years ago, “All of the jazz and blues venues here had dried up,” he recalls. The couple traveled to festivals around the country to get their music fix, making friends with musicians along the way. With the opening of The Barrel Room five years ago, in the space adjacent to Twisted Vine, those friendships proved instrumental in getting award-winning talent, like guitarist Brandon Miller and Indigenous blues star Crystal Shawanda, to stop by when playing in Miami and Tampa.

The design at The Barrel Room was inspired by clubs in Chicago, Memphis and Nashville. Reclaimed barnwood covers the walls while hammered copper tops the bar. The stage is cozy, the lighting is dim and there is just enough space between tables to dance. Friday and Saturday nights are dedicated to blues bands; jazz is featured on Wednesdays, Thursdays and at Sunday brunch.

During season, the kitchen reopens with a focus on shareable plates; until then, Twisted Vine’s full menu is served until midnight most nights. And, that’s a good thing, considering that the bar keeps one of the largest selections of small-batch spirits in Fort Myers, including roughly 60 whiskies and bourbons, as well as barrel-aged cocktails.

The Club Room at Campiello, Naples

For 22 years, diners have been lured into Campiello’s Tuscan-inspired courtyard on Third Street South for sophisticated Italian fare. In 2020, after acquiring a neighboring space to increase the restaurant’s indoor seating and ambiance, owner Richard D’Amico added another element: live entertainment.

The Club Room at Campiello, which debuted last season, carries on its parent restaurant’s Italian swagger. The walls are finished in eggplant Venetian plaster, accented by moss, gold leaf trim, a reclaimed wood ceiling and a black-and-white checkered floor. A curtain of bubble lights hangs behind the small stage, where nightly live music was led during the inaugural season by acclaimed jazz pianist and recording artist Benny Weinbeck. Special guest vocalists may include Emily Wade Adams, Rebecca Richardson and Vanessa Trouble. “We imagined this space as a melodic jazz-era oasis,” D’Amico says.

The menu features Campiello classics alongside a rotation of modern plates created specifically for The Club Room, which is slated to reopen in January. After dinner, servers have been known to roll out the Cart del Salone, stocked with top-shelf spirits and liqueurs, for an elegant finale.