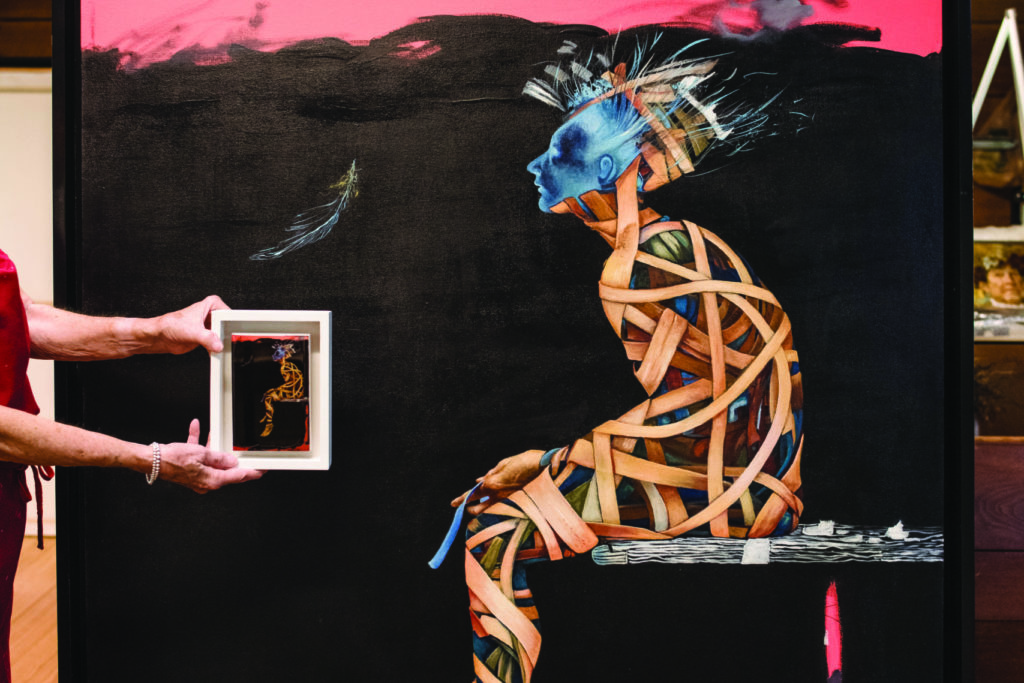 Lynn Davison openly admits that she’s no fan of palm trees. Though she has lived in Naples since 1968, her artwork—moody, introspective oil paintings interspersed with thrumming blues, unfolding hands and gaping eyes—stands out like a black sheep among a Floridian art scene full of pastel hues and watercolors of the beach. Davison’s figurative paintings—in which she renders the luminous shadows of her subjects’ bodies, faces and psyche—have a quality more akin to slash pine needles than palm fronds.

Despite her long tenure here and prolific career, Davison may be better recognized throughout the country than in her hometown. She’s represented by Alan Avery Art Company in Atlanta, which exhibits artists ranging from contemporary heavyweights Chuck Close and Kara Walker to 20th century luminaries such as Helen Frankenthaler and Robert Rauschenberg. The National Portrait Gallery in Washington, D.C. selected her as a finalist in its prestigious Outwin Boochever Portrait Competition in 2013, and her paintings are in notable collections across the country, from Sarasota’s Ringling Museum of Art to the esteemed private collection of Howard Tullman.

The 78-year-old artist continues painting at a prolific pace, but she now also wields a surprising and versatile new tool: an iPad. In the last five years, she began a new series of small, mixed media pieces that look like tiny paintings on wooden panels. Working with Procreate, a digital illustration program, she draws new figures from imagination, and changes the background by layering in images she’s taken, removes elements, extrapolates pieces of one to drop into another, or creates suites by repeating a single image with different colors or textures. She then adheres the printed digital images onto wooden panels—most no larger than 4 inches by 6 inches—that she draws on and signs before lacquering. When lacquering the panels, Davison must ensure that the epoxy is uniform and fully covers the paper underneath, sealing it and transforming it from a printed image into an object: a glowing, palm-sized window to the subjects beneath. 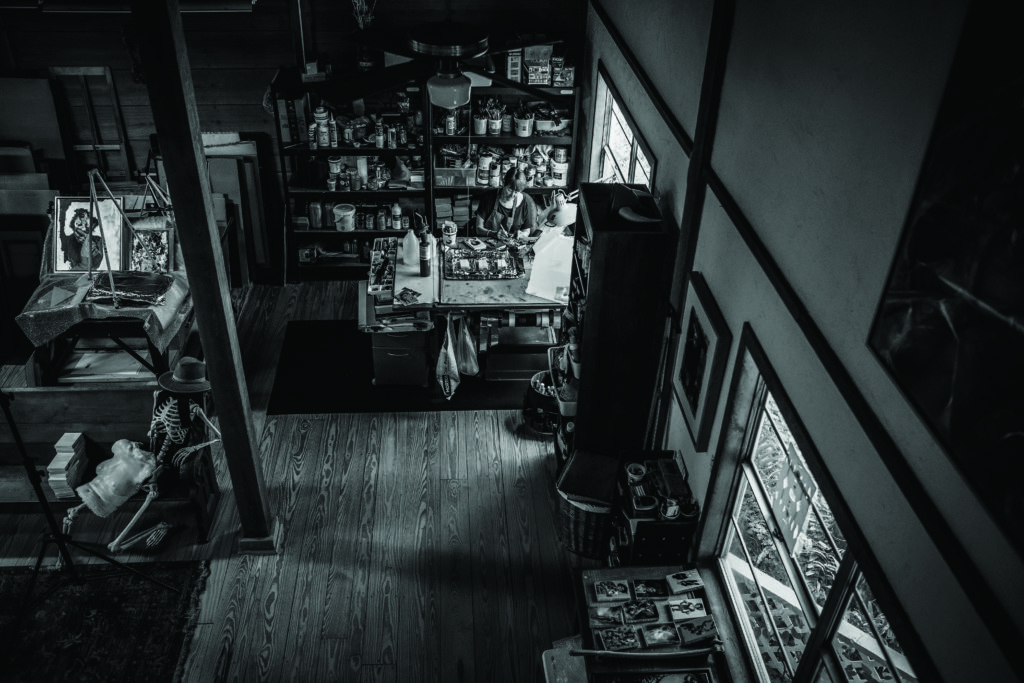 “I’ve done some things that go pixel by pixel,” Davison says, referring to how she methodically manipulates her digital images. Her mixed media artworks are lined up on a wooden table beneath a window in her studio, which is inside the home she and her husband built in 1976. The natural light that fills her studio isn’t the bright tropical glare of postcards and vacation advertisements; it’s muted, nimbly filtering through the flora that tumbles against the exterior of her home.

Light is a subject Davison understands well, and one she wields with equal skill in both mediums. Oil paint can be totally opaque and sometimes chalky or muddy as a result; or it can be almost transparent, applied in glazes or veils to preserve its brilliance, layer color and create depth. Davison manipulates the oils and the pigments that form the paint itself. Doing so, she formidably walks the tightrope between opaqueness and total transparency. In the end, her paintings alternate between matte and glowing expanses—a quality she carries into her iPad works, though in extremes. Her digitally enhanced art, with printed images buried under a layer of epoxy, are so luminous that they’re reflective. “They’re getting more entwined,” Davison says, speaking of the relationship between her digital artworks and oil paintings. “I will sometimes do an iPad drawing and it will suggest a painting. And if I’m working on a painting, I will take a photograph of it and play with it on my iPad. They’re really interchangeable at this point.”

The riveting visual impact of Davison’s mixed media artworks is inverse to their handheld scale. While some of the subjects are delightfully aloof, with rounded noses and drooping wrists, some border on the wild, with limbs and gazes akimbo. This echoes themes from Davison’s oil paintings, which explore deeper, more universal levels of the psyche. Taking it a step further, the digital artworks’ diminutive size invites closer scrutiny, which exaggerates the mood of each tiny subject. Every curious expression looks more probing and every sign of distrust more foreboding. For the subjects that are playful, the quality comes through as more earnest and unapologetic.

“I’m lucky for not having many distractions, but I also don’t have much of a life outside my studio,” Davison says. In her workspace, a plastic skeleton lounges in a church pew straddling the middle of the studio floor. An etching press now serves as a table, with paintings stacked high atop it. There’s an easel at the other end of the wall, and between them, more stacks of paintings are lined beneath windows. Her iPad is propped on an old wooden drafting table, and her ease with the device is as organic as her surroundings—and in sharp contrast to most of its trappings.

Some people may consider the artist fearless to embrace digital media in her ’70s, but the exploration of unfamiliar materials has long punctuated her studio practice. “There are so many things that I look at and I think, ‘Oh, that would be fun to try.’ Whatever allows you to express things that you may not otherwise express or just something more to play with,” she says. “It’s all play, and it’s whatever works for you—artists play.”

Whereas most people retire from a decades-long career, Davison’s work is never-ending. If anything, the longer she works, the more exponentially her ideas multiply, materializing as more artwork in varying mediums. “To me, ideas have always come from working,” she continues. “It happens when you sit down to work and that will suggest something else, and then that will suggest something else.”

Working under the light filtered through the slash pines outside her windows, she paints, sketches and builds almost every day; she plays. “It becomes a habit. It’s what I do,” Davison says. “Someone asked the other day what I did for fun. And I just stared at them.”