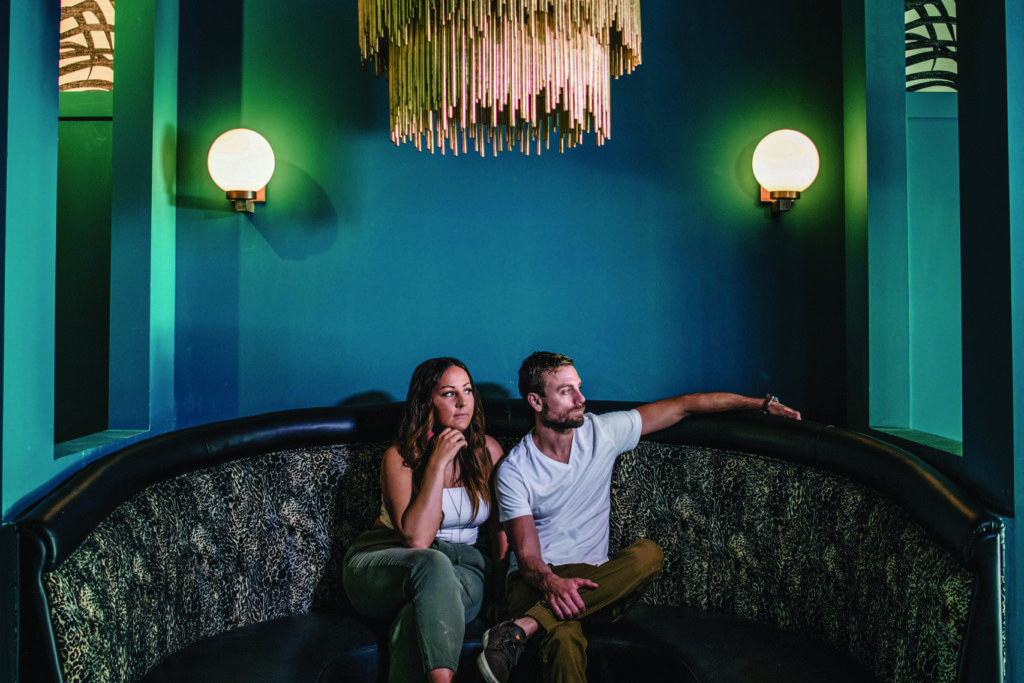 For its new steakhouse, the team behind Sails brings its impeccable service and attention to detail to North Naples. Anchored by a Greek white marble bar and wall-to-wall custom wine storage, the restaurant draws on co-owner Corinne Ryan’s background as a top international meat broker. Expect exclusive cuts of beef that can be traced back to the exact farm, an extensive wine list and a clubby lounge dedicated to gourmet burgers. Meanwhile, the team is also hard at work on Sava, next door to Sails, with a casual, health-centric approach.

Restaurateurs Caitlin Emery-Schewe and Brandon Schewe helped create downtown Bonita’s up-and-coming cool factor with the 2019 opening of Downtown Coffee and Wine Company. Now, they’re raising the bar for the area’s dining scene with The Bohemian, on the corner of Old 41 and Bonita Beach Road. An art deco-inspired interior (think jewel-tone fabrics and gold accent lights) sets the stage for the cuisine, which blends French technique with Asian flavors, cooked on an Argentinian-style wood grill. Behind the bar, low-ABV cocktails compete with local craft beers and a curated wine list.

More than two years in the making, the December launch of Cameron Mitchell’s Del Mar Naples is big news—and not just because of the size of its venue on Fifth Avenue South: two stories and 9,174 square feet that used to be home to Café Lurcat and Bar Lurcat. Mitchell, who also owns Ocean Prime, promises a seafood-heavy menu and a robust wine list. Chicago design firm Knauer renovated the space, adding quarried chiseled stone feature walls, a wood-slat ceiling treatment, lounge seating and lush greenery, with hanging plants and ficus trees throughout.

More than a fine dining experience, Peter Tierney’s new waterfront restaurant offers a full immersion in coastal cuisine. Focusing on what’s sustainable and, when possible, local, the culinary team emphasizes wild-caught, underutilized species, such as sheepshead and tripletail. The former Wharf Tavern on 10th Street South in Naples was gutted to create the new restaurant, which, like The Claw Bar at Tierney’s Bellasera Resort, is complete with a raw bar. And catch this: There’s a 45-foot namesake yacht to shuttle guests into the Gulf for an out-at-sea dinner, bookable through Bellasera Resort. Look for The Syren to open in December.

A doorknob poking through the vines may be the only noticeable sign for this speakeasy lounge, slated to open this fall on Fifth Avenue South in Naples. Inside, the McCabe family, who are behind the Inn on Fifth, tapped Knauer, the same firm behind Del Mar, to design the 70-seat restaurant, which features a 1920s-inspired look of green velvet banquettes, back-lit onyx, brass and dark wood. Expect a globally inspired, small plates menu and a sophisticated cocktail program that befits the speakeasy concept.

Fifth Ave. Reaches for the Stars

We already love Fifth Avenue South’s ample sidewalk dining and annual events like the Long-Table Dinner, where a 1,600-foot dinner party stretches across the avenue. Now, the downtown district ups the ante with the approval of a pilot program that allows for rooftop restaurants along the 800 block of the street. Christopher Shucart of JCS Realty Group—co-owner of the 837 building where Chops City Grill and Emillions Art are located—spearheaded the effort, and plans are underway for a yet-to-be-named restaurant atop the building.
—Samantha Garbarini