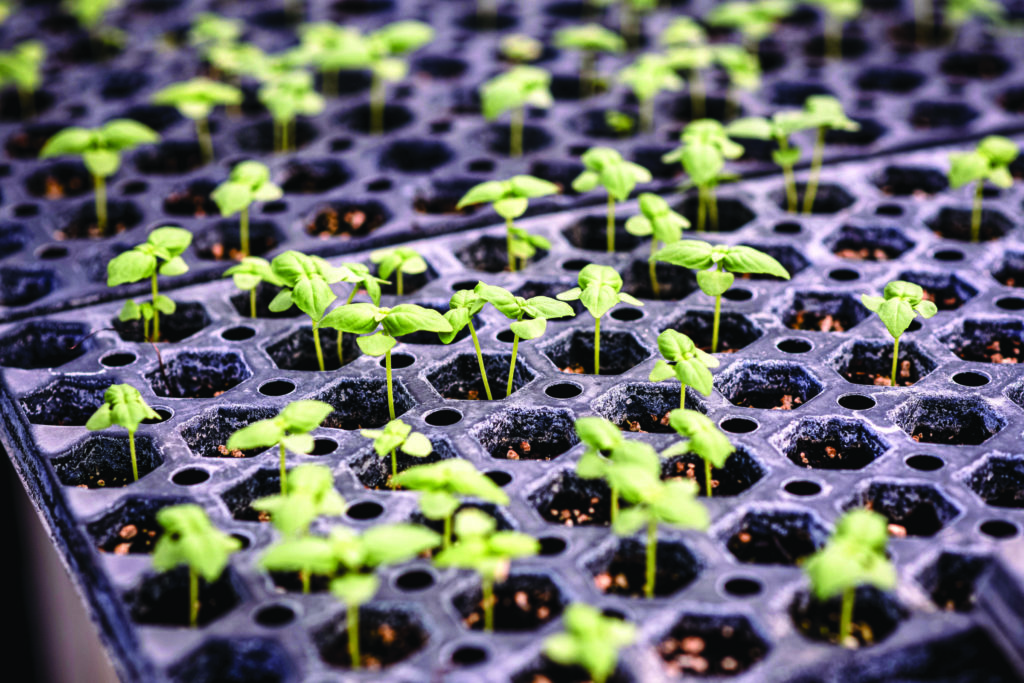 Once upon a time, a change in seasons brought with it a different set of foods: squash in winter, asparagus in spring, berries in summer and apples in fall. Seasonal fare still exists, of course, as food magazines and marketers constantly remind us. But the reality is, you can get pretty much anything any time you want. Tomatoes not growing in Florida in July? No problem! Thanks to industrial farming, California will ensure they grace your plate, just as the Midwest supplies corn during those months when our heat is better for popping kernels than producing them.

But at Naples’ Inyoni Organic Farm, a husband-and-wife team is hard at work inspiring consumers and chefs to adopt a seasonal, regional, holistic mindset. Farming on six acres in Golden Gate Estates, Nick Batty produces some 50 varieties of vegetables and fruits—many of them distinct to the tropics—which he harvests and quickly delivers to local farmers markets and restaurants. His wife, Natalie, takes on many roles including turning the bounty into farm-to-table lunches—served overlooking their idyllic, tree-ringed fields—via Inyoni’s Roots to Fruits Organic Farm Food Truck. “It’s all about celebrating the season and what’s abundant,” she explains one afternoon, while watching their 8-year-old twins at play. “If it’s strawberry season, I’m making desserts that celebrate strawberries. When we have bananas, I freeze them, and we have banana bread. When we harvest zucchini, I make zucchini-chocolate-walnut muffins.”

Both Nick and Natalie were raised in food-centric households. Natalie is from agrarian upstate New York and learned to cook by watching her mother, who just so happened to be a chef. Later, she studied with Culinary Institute of America-trained Kristina San Filippo, the former chef-owner of Bonita Springs’ Purple Spoon Culinary. Nick grew up in Eswatini, then known as Swaziland, before his family relocated to Collier County when he was 10. The new location came with a new career for his English-born father: growing pineapples. Eventually, Nick became interested in the family business, but he had a mission all his own: “I was very concerned about the environment growing up. I felt personally burdened by it and responsible for what I did in the world,” he says. “Organic farming, I thought, could be a very small part of the solution.”

Nick planted his first crops in 2000 on a field set aside by his dad, and by 2008, he was ready to give farming a go full-time. He purchased a parcel of land adjacent to his parents’ farm during the 2010 recession when land prices, at last, became affordable enough for a small farmer. “I never thought I’d be able to buy here,” he says, looking out over his fields. “It was a dream for me.”

Nick opens a five-gallon bucket to reveal a microbial mixture that he’ll dilute and spray over his fields to help break down a summer cover crop, which was planted to enrich and protect the soil during the offseason. Sustainable practices aren’t the only thing that distinguishes Inyoni from other farms. During his tenure, Nick has abandoned some familiar fare and introduced vegetable varieties from other tropical climates, expanding consumer palates—and his growing season—in the process. “I realized that a lot of cooler weather crops were definitely not suited to our environment,” he explains. Traditional spinach, for one, is limited to a two-month growing window. Fan-favorite lettuces tend to “bolt,” or go to flower, during hot spells, ruining the flavor.

The solution? Trade out more common spinach for an Asian variety, called tatsoi. “It’s not quite the same taste, but the flavor was to the liking of our customers, and it was easy to grow here,” he says.

The couple rebranded some of Nick’s products to make the unfamiliar more approachable. They call tatsoi Asian spinach, for example. Whatever they’re calling it, local chefs are buying. Talk to the culinary minds behind many of the region’s best restaurants—Alexander’s, Chez Boët, Sails and Osteria Capri, to name a few—and they’ll point you right back to Inyoni. “I built my menu, in some aspects, on what Nick was successfully growing,” Jeff Mitchell, chef-owner of The Local in Naples, says. Inyoni is a primary supplier for his restaurant and a host of others for good reason. While Nick looks to his surroundings to decide what to plant, he also considers his culinary partners’ needs. He reviewed seed catalogs with Mitchell as the chef developed his vision. He also regularly mixes customized salad blends for Darren Veilleux, executive chef at Sails. The palate-pleasing blend includes mustard greens, gem lettuce, tatsoi and baby kale.  “I hate going into a restaurant and seeing everybody have the same greens,” Veilleux says. 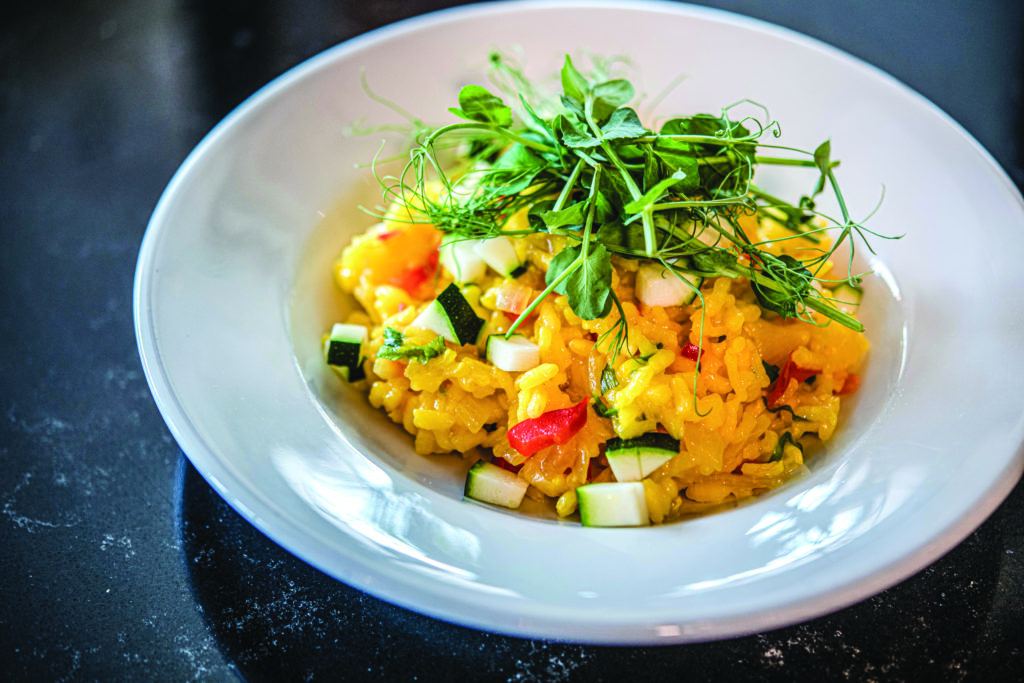 Chefs have come to value the spontaneity that accompanies an ever-changing local harvest. Carlos Rios Babilonia, sous chef at Naples’ The Claw Bar, creates a daily farmers’ salad and a fish special based on what Nick and area producers deliver. “For me, the most amazing part is having him come into the restaurant and show us what he’s got,” the chef says. Nick agrees there’s no one doing quite what he does: “Instead of the Sysco truck arriving, smelly Farmer Nick comes to the door!”

Inyoni is one of at least 320 farms in Collier County, according to the latest agricultural census. About 90% are classified as small farms, making $250,000 or less in gross sales, and the vast majority of those are less than 20 acres, Jessica Ryals, the sustainable foods systems agent for The University of Florida Institute of Food and Agricultural Sciences Collier County, says. Inyoni is one of the region’s best established, with a presence at four local markets, including the Third Street South Farmers Market on Saturdays year-round, Vanderbilt Farmers Market on Saturdays in-season, and Bonita Shores Club and Marco Island Farmers Markets, which both take place on Wednesdays in-season. They also host tours, lunches, yoga retreats and farm dinners at Inyoni, as well as a community supported agriculture (CSA) program. “They have an amazing strategy that they’ve really built from the ground up,” Ryals says.

While successful, the Battys are not content to rest on their laurels—or lettuces. Instead, they’re working tirelessly to prop up other small farmers. Nick joins regional meetings hosted by Ryals; Natalie sources ingredients for her farm-to-table events from fellow area growers and ranchers. “We’re trying to figure out ways to help small, local growers get going,” Nick says. “Personally, I’d like to see lots of little farms in this area.”