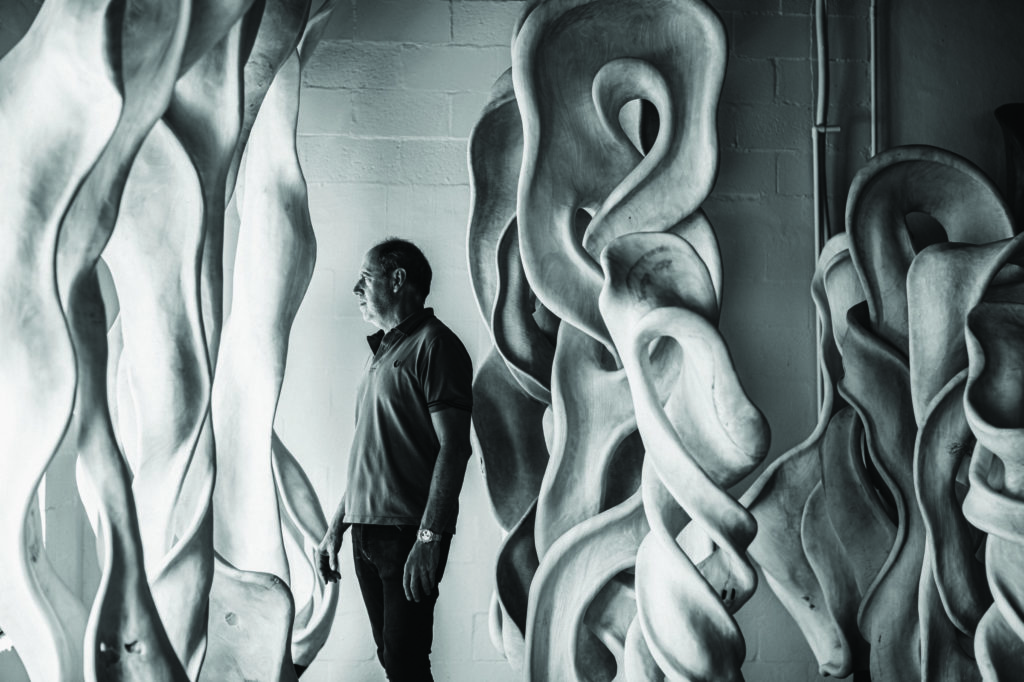 Mitchell Siegel has made it his life’s work to incorporate nature into his interior designs. In the 20 years that he’s welcomed customers into Cocoon—which first opened in Greenwich, Connecticut, and debuted a Naples location last year—he’s built a reputation for sourcing exotic timber, reeds, leaves and geodes to create sculptures, tables and wall art. He regularly spends months in the jungles of Southeast Asia and Brazil, looking for specific cuts of tropical wood. Where others only see the tangled roots of the tamarind tree or the gnarled pieces of the coco twig plant, he sees possibilities for bespoke furniture. That eye—along with the ability to execute his vision—allowed him to build a loyal client base that spans the globe.

Since Cocoon’s opening in Naples, local shoppers can’t get enough of the store’s organic offerings. Every piece in the shop sold in a matter of weeks. Siegel quickly realized that his small workshop in Greenwich could not keep up with the demand down south. He remedied the problem by moving the manufacturing arm of the business from its 10,000-square-foot space up north to a 25,000-square-foot facility in Naples. He relocated four of his woodworkers and hired six local craftspeople to meet demand while allowing the artists enough time and space to experiment. Plans are also in the works for MHK Architecture & Planning to reconfigure the space, which will include a total reimagining of the exterior, with gardens and a duck pond. 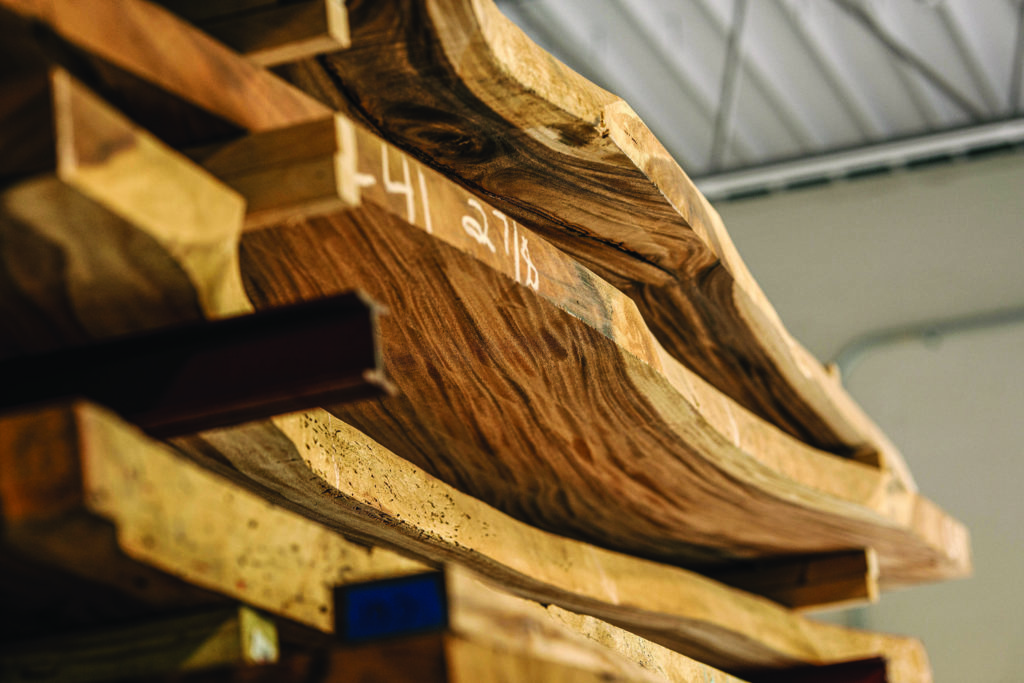 In the workshop, a massive kiln looms more than 24 feet tall, and a large-scale planer and leveler, saws, and a spray booth fill the space. While the kiln takes up a lot of square footage, its presence is imperative as it dries wood until the moisture content is low enough that the materials can be preserved without concern of rot. It’s a process that doesn’t exactly happen quickly—from start to finish, it can take up to three months—but it allows the eventual works of art to last a lifetime.

While there are plenty of practical concerns being attended to, there’s also a flurry of fun-to-watch activities like carving and staining that happen on any given day. It has taken Siegel and his band of international artisans years to perfect techniques on some of the more complex pieces he offers, such as lotus leaf art and reed and resin wall plates, and they’ve worked in tandem to figure out the best processes for creating those signature pieces. 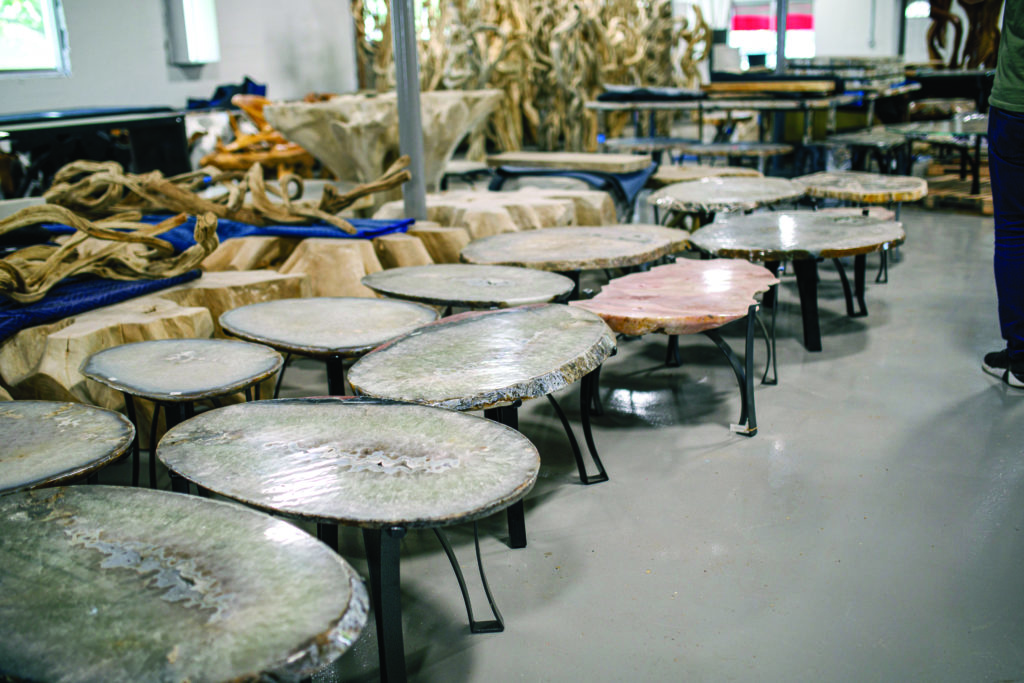 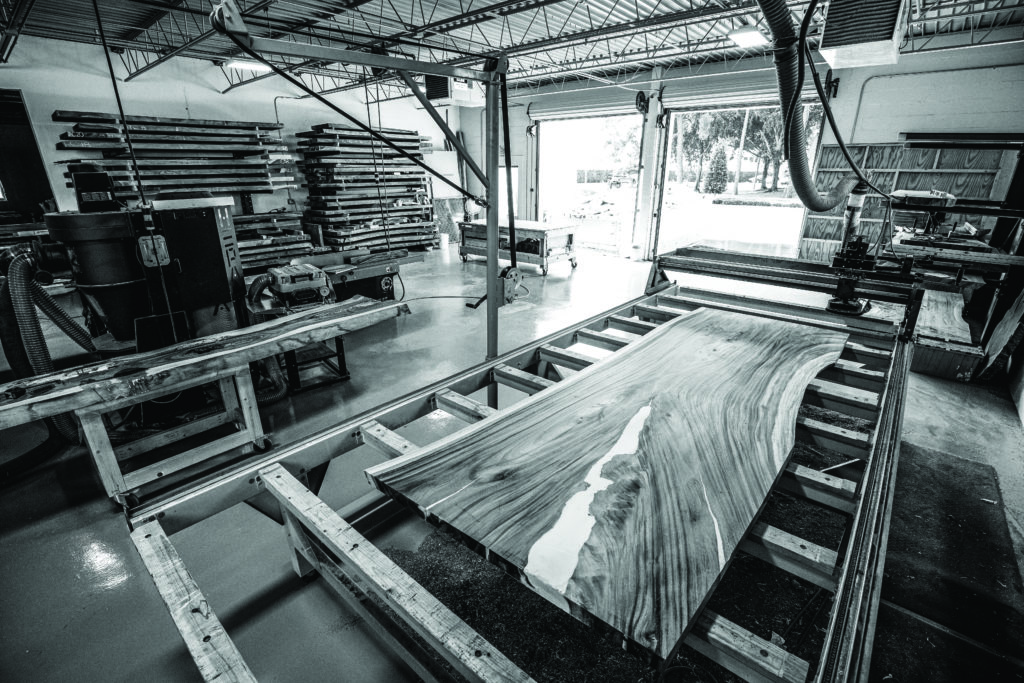 Siegel prides himself on his personal connection and loyalty to Cocoon’s artisans and his suppliers overseas. He’s also happy to get his hands dirty. When his contacts find potential selections, say, monster roots pulled straight from the ground, he’s there, helping to rinse them and mark them with chalk. “I’ll come up with a design for some type of natural sculpture we can achieve and tape them off,” Siegel says. “The craftspeople cut and carve them in Indonesia, but we’ll sand and bleach them here and build stands, or do what we have to do in order to refine them.”

In the new space, Siegel is trying to work up to the point where customers can fall in love with and take pieces home immediately, so at any given moment, clients can choose from dozens of large root sculptures, petrified wood tables, acacia dining tables, geode slices, palm base vessels and slices of onyx fit for outdoor use.

In the workshop, customers can view raw pieces of timber and stone and consult with Siegel and crew to dream up custom creations.