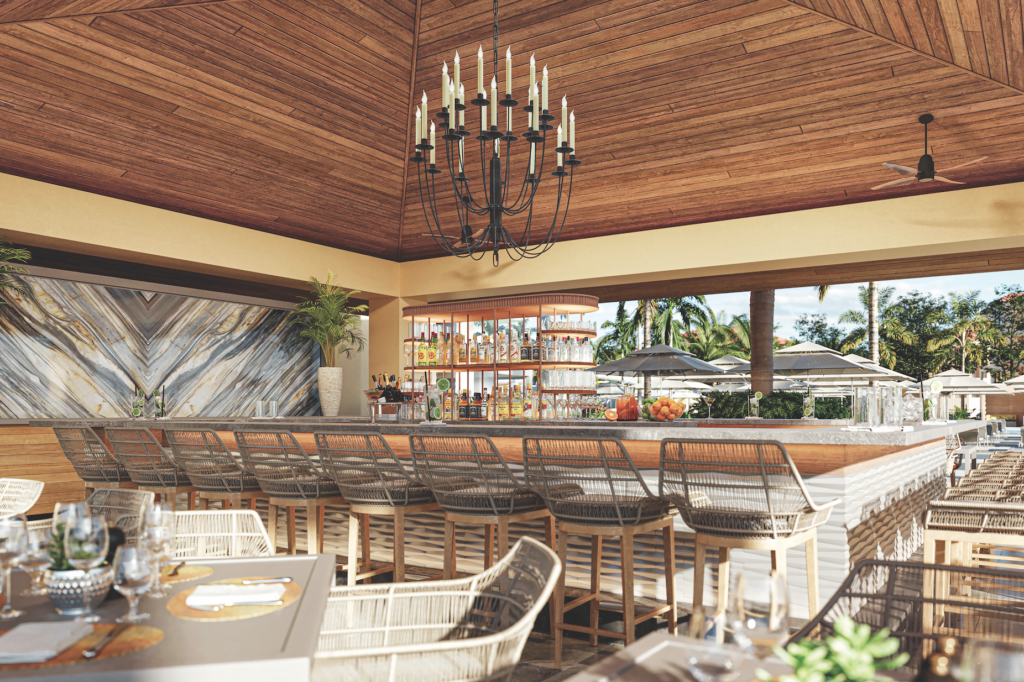 The Ritz-Carlton, Naples’ refreshed rooms and 92 new suites won’t be ready for check-in until December 2022, but the first phase of the resort’s renovation debuts at the end of the year, with aesthetic enhancements to sushi restaurant DUSK and the hotel spa. Swathed in subtle shades of seafoam green and gold, the design for the expanded, remodeled rooms—totaling 474 upon completion—nods to glamorous sleeper cars from the golden age of train travel.

The Ritz-Carlton Golf Resort, Naples, also introduced an addition last spring: The Reservoir, a 14,000-square-foot outdoor playground with three waterslides, a winding lazy river and a children’s splash area. Six luxe cabanas encircle the pool (which is adjacent to the new Latin-inspired Ría restaurant) with wet bar and butler service. In the evenings, cabanas double as spaces for private dining under the stars, with Champagne service and South American-themed tasting menus.

Regional airports embrace the new normal with vast expansions, renovations and new routes. The $7.6 million Naples Airport remodel, which began in May, is expected to debut before Thanksgiving, with coastal-modern design and an expanded passenger lounge, marketplace and lobby.

Southwest Florida International Airport (RSW) keeps making headlines with its record-breaking numbers (2021 is projected to exceed the 10 million travelers marker from 2019) and more direct flights to top destinations. Thinking about a trip to Germany? It gets easier next March with three nonstop flights a week from RSW to Frankfurt, a major hub for European connections, on Eurowings Discover. The airport also offers new direct routes to Los Angeles and San Francisco. To accommodate heightened traffic, RSW starts work on a $331 million, three-year terminal expansion plan this fall, which will bring more concessions, a business lounge and fresh look to the airport.

Punta Gorda Airport—which is in the midst of an $18 million renovation—spreads its wings, too, with nonstop service to cool-kid cities like Austin, Texas, and Bentonville, Arkansas. Meanwhile, the terminal at the Marco Island Executive Airport was upgraded to the tune of $9.5 million in March. Where to next? —James Raia