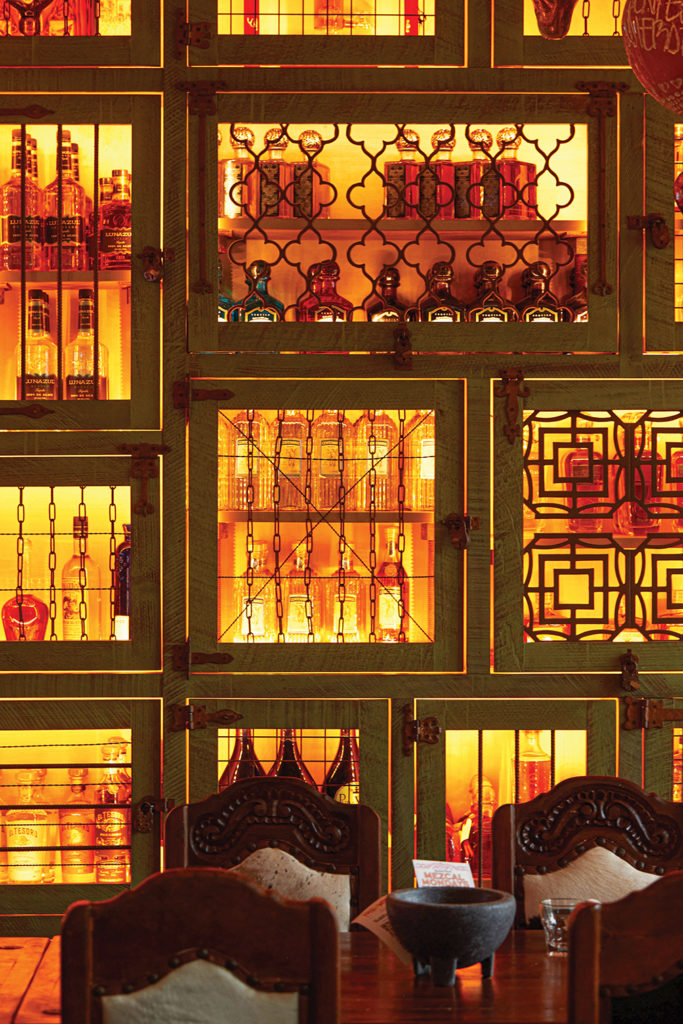 At Rocco’s Tacos in Naples, the team dispels stereotypes and educates guests on the varied aspects of refined tequilas and mezcals. (Photo by Erik Kellar)

From international brandies to premium pours of Scotland’s top tipple, local bar programs are honing in on a single, obsession-worthy spirit, offering guests an education along the way (designated driver is highly recommended).

Lima Restaurant and Pisco Bar in East Naples is the place to get a primer on pisco, a Peruvian brandy distilled from grape juice. The restaurant carries seven brands, including award-winning Intipalka, artisan Benedicto Peña and aromatic Cuatro Gallos, as well as 15 housemade infusions in flavors like rosemary, blueberry and cinnamon. “Peru has evolved into this complex bar culture, and since Lima has [two] of the top 50 restaurants in the world, we try to bring here whatever is going on there. Pisco is always an enormous part of it,” owner Amanda González Zúñiga says. Peru has an ideal climate for grape production and Spanish colonists in the 16th century developed pisco as an alternative to Spanish brandies.

Servers at Lima Restaurant are trained to initiate conversations with customers, suggesting cocktails that act as an introduction to the spirit. For the uninitiated, staff often liken pisco to tequila, drawing comparisons and contrasts between the pisco sour—Peru’s national drink—and the Mexican margarita. “They are similar in that they are both sweet and citrusy, but pisco sours are always shaken. They have an interesting texture and are served with a layer of foam from the inclusion of egg whites,” González Zúñiga says. Though the sour is its most familiar cocktail, Lima doesn’t limit the spirit to a single application. González Zúñiga’s husband and business partner, Dario, is partial to the restaurant’s César Vallejo cocktail. Named for the famed Peruvian poet who lived his final years in France, the drink blends French verbena-infused pisco with St-Germain elderflower liqueur, muddled cucumber and lime.

In downtown Naples, another regional grape brandy—Italian grappa—is the focal point at Grappino. Owner and chef Fabrizio Aielli wanted to spotlight the favored spirit of his Italian hometown by making it the centerpiece of his newest restaurant, which opened in late 2019. “‘Grappino’ means ‘little shot of grappa,’” wine director Liset Zelaya says. “Fabrizio is from Venice, and one of the traditions there is walking around in the afternoon trying different grappas.”

More than 100 bottles line the walls of the whimsically decorated restaurant, and the spirit is offered in a variety of creative cocktails, in which syrups and fruit liqueurs balance grappa’s fiery heat. Displayed in large dispensers are 20 infusions with ingredients like honey, blackberry and cumin. Zelaya also stocks rare and interesting bottles for diners who want to delve deeper into grappa’s range. One of her favorites is the golden-hued Cleopatra Moscato Oro, which is made from Moscato grapes and aged in French oak for a smoother finish. “It’s absolutely beautiful. It has no burn and has honeyed notes—peaches and apricots,” she says. “Most people never realized that grappa could be so tasty and elegant. We have so many people converted because our servers are encouraged to offer a taste after dinner.”

Agave-based spirits are the focus of the back bar at Rocco’s Tacos in Mercato. Corporate beverage director David Ortiz knows that changing guests’ minds about any spirit can be an uphill battle—but tequila is particularly challenging because it’s associated with youthful indiscretions. Armed with roughly 500 bottles of tequila, 100 bottles of smoky mezcal and loads of knowledge, he’s confident he can convert just about anyone. “We focus on education, education, education,” he says. “We have Patrón, Casamigos and Hiatus flights that are very approachable, and that’s how we open the door.” (They go down very smoothly when served with an orange slice and a cinnamon-salt rim.)

From there, bartenders can point out lesser-known boutique spirits, like supple San Matías añejo, cabernet-barrel-finished Código 1530 Rosa and Fuenteseca Vintage 1993, which commands a $200 price tag for a 2.5-ounce pour.

For the younger generations, character-filled mezcal has ballooned in popularity. Unlike tequila, which is made with 100% blue Weber agave, mezcal can be crafted from any type of maguey, including wild varieties, exhibiting a wide range of flavors and terroirs. “The flavor reflects the traditional, ancestral way of making these spirits,” Ortiz says. “Millennials have taken it up as their spirit. They love the story and history. They’ve embraced it, having it in smoky margaritas.”

Lovers of Scotch sidle up to the bar at Chez Boët to sample its selection of single malts and blends that go beyond big brands. Owners Lisa and Philippe Boët began amassing their collection shortly after opening in 2003. “We met a Scotch specialist who worked for Gordon & MacPhail, which is a family-owned company that, at the time, was purchasing all these very old, traditional distilleries and bringing them back to life with the express interest of maintaining the personality of each,” Lisa explains. “We brought in some of their Scotch and started getting more into single malts. At the time we had maybe a dozen or so and, as the years progressed, we would add to it.”

Today, the restaurant has more than 30 Scotches and whiskies behind the bar. With the bourbon boom, they’ve begun adding rare, small-batch bourbons and ryes to the list, as well. “We love to celebrate the artisan. Everything we make [at Chez Boët] is from scratch,” Lisa says. “These artisanal spirits fit into our framework.”

When it comes to the best Scotch on the list, Lisa and Philippe don’t see eye to eye. “My husband goes for more traditional single malt. I’m more offbeat. I like peaty, smoky Scotches. He can’t stand that,” Lisa says with a laugh. Despite their differences, Lisa agrees that Philippe gets the last word as to whether the whiskey should be served neat or with ice. “Based on his years of tasting and drinking, he believes a drop of water opens up the flavor,” Lisa explains, adding that the restaurant has a special ice machine to make top-hat-shaped cubes specifically for the whiskey program, served separately so guests can decide if or when to add ice to their selected pours. “Little by little, they go through the tasting process and then, in the end, they decide what they like.”