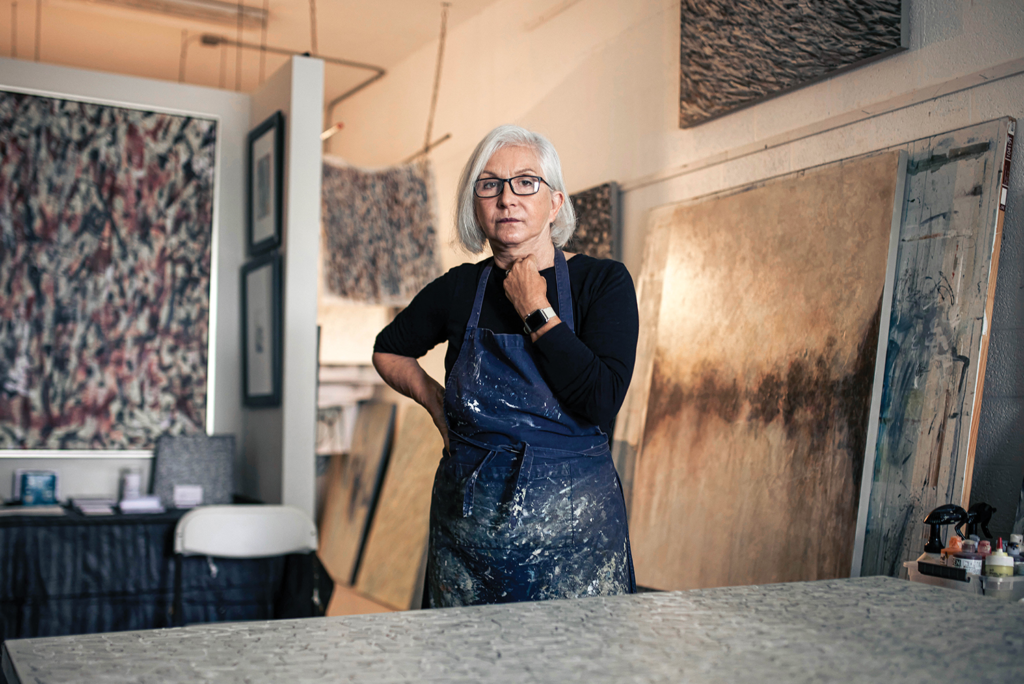 A former accountant, Rac channels her skill with the piano and aptitude for systems into calculated, symphonic brushstrokes. (Photography by Brian Tietz)

“The mark is the motif that’s being repeated, just like music,” Naples-based artist Anna Rac says, standing in front of one of her abstract mixed media paintings. She moves her hand in deft, elegant orbits across the canvas, illustrating her process for creating the circular pattern in the piece. Her feet begin to bounce lightly, and soon, her whole body sways.

Rac’s creative process is also circular—a constant conversation between herself and the work. Even though she’s the creator, she doesn’t assume dominance over her art. She insists that a balanced dialogue unfolds as she paints, like a feedback loop that crescendos as she develops the imagery and layers of paint. “That painting told me I need a mark there, and there, and there,” she says, pointing to the canvas, still swaying to an innate rhythm.

Born in Poland, Rac began studying piano when she was 4 years old. “My parents were forcefully relocated during World War II from the eastern part of Poland to Gdańsk, where most of the German population (that had previously lived there) fled, leaving all their furniture and belongings, running from the Soviet Army,” she explains. One of the belongings left in the Gdańsk apartment her family moved into was a piano, and she became a dedicated music student by the time she was forced to flee the Eastern Bloc, alone, at age 16 to escape political strife. She arrived in Chicago in 1966 and began working as a live-in nanny while navigating a new country and culture, far from her family and her piano.

Even without access to an instrument for a few years, Rac remained determined. She applied to the University of Illinois at Chicago and graduated with a bachelor’s degree in music. Though she hoped to become a professional classical musician, she grew tired of working odd jobs to support herself and went back to school for a master’s degree in business and accounting. There, Rac applied the same focus and fastidiousness she had learned from her piano training. She recalls falling in love with the sleek aesthetics of early Apple computers in the beginning of her career. “I was very creative for a CPA,” she says with a smile. “None of these titles and jobs fit my personality, but wherever I worked, I found a way to be creative and improve the work environment. Even accounting systems can be beautiful, elegant and user-friendly. I’ve always been drawn to elegance.”

Rac moved full-time to Naples in 2010 and began painting in 2013. She had never dabbled in visual art before and enrolled in a painting class on a whim. In her first session, she instinctively began painting in time to the background music. She immediately knew what to do with this new art form that required a paintbrush rather than piano keys. “That’s why everyone should try different things,” Rac says.

Music plays a big role in her art. Above a makeshift desk, there are two unflinchingly bold works, which she painted while listening to the music of famed 20th-century Soviet composer Dmitri Shostakovich. The pair evokes the finale of his “Symphony No. 5”—dramatic and sweeping, heavily punctuated by bursts of brass and percussion that had Rac reaching for red and black paint.

Then there’s the rack of paintings on paper, which hangs nearby. The artist finds that their “lack of preciousness” mirrors the transience of music. As paper can be more practical and disposable than a sturdy canvas, it invites more experimentation and, in Rac’s case, more spontaneous markings that echo the ephemeral quality of sound waves moving invisibly through the air. If you know where to listen and look, music is everywhere in her studio. Although Rac never performed professionally, she also never quit playing the piano (“I still play every day,” she says), and she certainly never stopped listening to classical music. 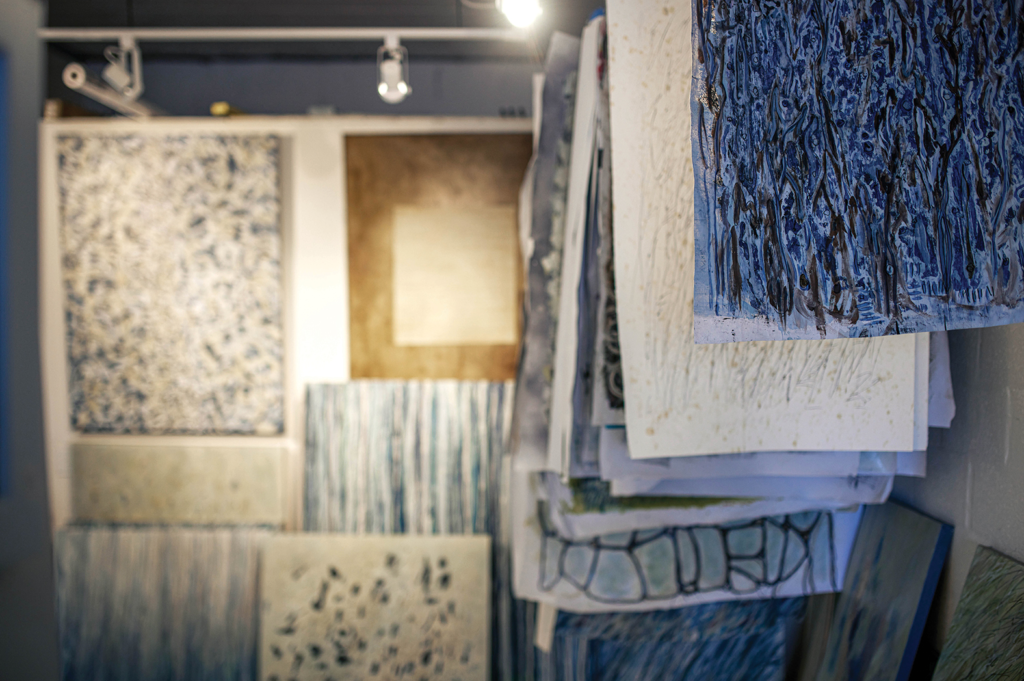 The Shostakovich-influenced paintings are sharp, aggressive anomalies among her usual oeuvre. Rac prefers to paint while listening to Bach, Beethoven, Vivaldi, Handel, “especially Baroque composers,” she says, describing their works as “quiet music.” She points out a painting that’s more typical of her calm style, which she completed while listening to Beethoven’s “Tempest Sonata.” This time, her fingers flutter over the painting’s surface, playing each note on invisible piano keys. The blue, cool-toned abstract marks in this painting cascade down the canvas like the marks left by countless rocks skipped across the surface of water.

As Rac attributes her success as an accountant to her love of inventing “beautiful systems,” it’s no surprise that each of her artworks constitutes its own system, as well; now, rather than organizing data, she organizes layers of paint on canvas. Despite her popularity with local collectors, she still seems rather taken aback by her success. “Hopefully, [my work] will harmonize beautifully with the space. The painting should be happy there and be polite,” she says. “I believe what you paint reflects you as a person. I’m not a loud, dominant person, but there’s a lot going on under the surface.”