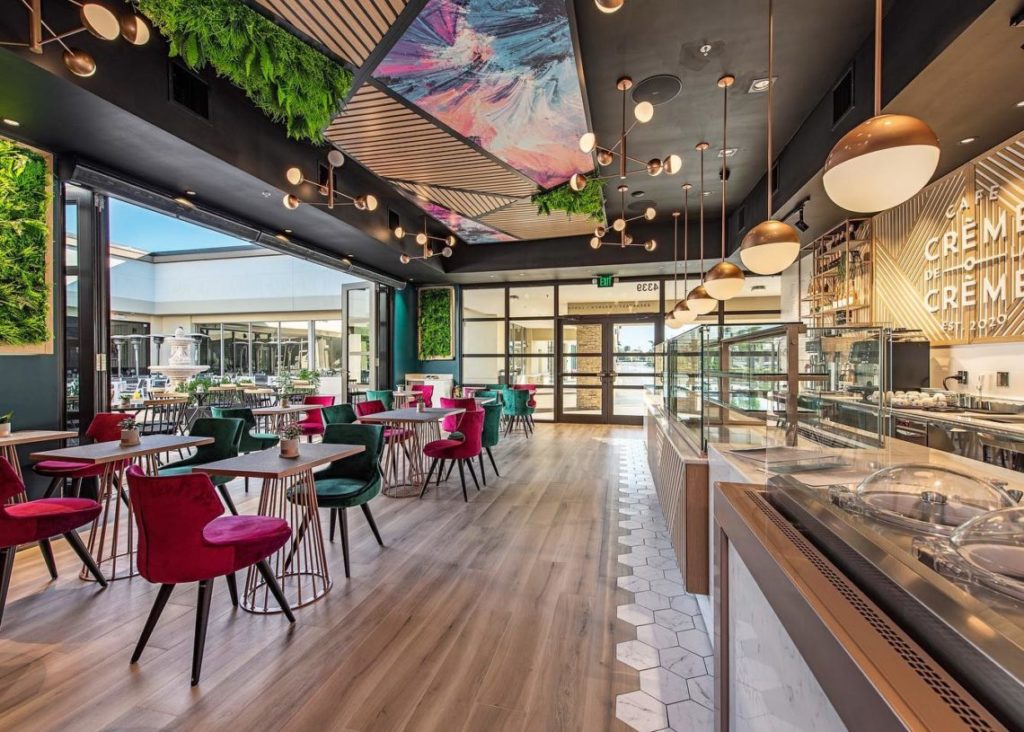 “We are simple and cozy and modern. I think Naples deserves this kind of space,” said Jovana Bojic, who owns the local breakfast and lunch restaurant with her husband, Ivan. “It was originally our idea to bring something new to Naples.”

Launched in early December in Park Shore Plaza on U.S. 41, the 50-seat cafe moved into the 1,500-square-foot space Escargot 41 vacated last year when the longtime local French restaurant expanded into a larger unit just a few steps away in the corner courtyard it shares with Crème de la Crème for al fresco dining around a large fountain.

Locals who remember the previous restaurant space will be amazed at the stunning, $450,000 transformation to create Cafe Crème de la Crème. “We remodeled the space from scratch to bring in fresh air and sunlight,” Mrs. Bojic said. “People love it. We have had amazing feedback from customers.”

The Bojics imported the cafe’s furniture, lighting, décor, plates, glassware and other items from Europe. “Everything is custom. We pick very carefully,” she said. “We try to be unique.”

In addition to the dining space, renovations included the kitchen, restrooms, plumbing and air conditioning. Besides the décor’s wow factor, perhaps the most noticeable change is the northern wall of the dining room which now opens to the outdoor patio with the addition of bi-folding doors.

It’s the second restaurant for the Bojics, who have operated Stefan Grill, a Serbian restaurant in a Chicago suburb, for eight years. They have eight employees in Naples but would like to hire three or four more.

Crème de la Crème, French for “the best of the best,” features fresh salads, sandwiches, desserts, juices and more. The café has freshly baked European bread and pastries such as croissants, muffins and cinnamon rolls. “The food is made from scratch,” Bojic said. “We are baking every morning.”

Savory crepes include a vegetarian Mediterranean variety with hummus, roasted red peppers, cucumber and feta cheese. Breaded and fried varieties include one with prosciutto, baby arugula, sour cream, mozzarella; and another with ham, gouda and sour cream. Sweet crepe choices include mascarpone with wild blueberry-lime sauce, ricotta cream and strawberries, Belgian chocolate and mocha sauce, honey and walnuts, as well as four kinds of Nutella crepes.

The café also has gelato and desserts. Beverages include hot and iced coffees, hot and cold tea, freshly squeezed juice, sparkling mineral waters, soft drinks, beer and cocktails such as an aperol spritzer and mimosas.

Cafe Crème de la Crème, 4339 Tamiami Trail N., is open for breakfast and lunch 8 a.m. to 4 p.m. every day except Sunday, the only day of the week it is closed. As requested by patrons, the café may adjust its time soon to stay open an hour or two later.