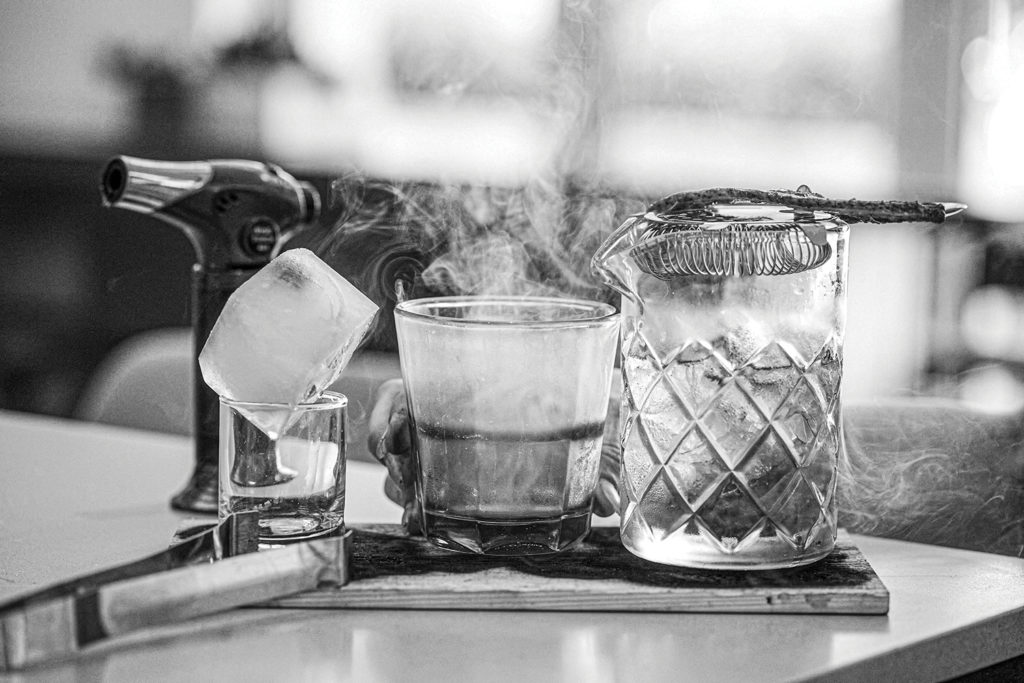 Getting lit has a different meaning at The Bevy. Located a few blocks from the Naples Pier, the 180-seat gastropub serves some of the area’s freshest cocktails. Order a Cedar Fire Old Fashioned, for example, and sit back and watch as a bartender ignites a cedar plank to imbue your drink with a subtle woodsy flavor.

Smoke aside, The Bevy is far from a dark and moody cocktail lounge. The indoor-outdoor space features plants, glass and retractable ceilings that bring the outside in (weather permitting). Bar manager Grant Reid leads a team of six bartenders who are responsible for delivering Signature Bevys, which range from the Old Fashioned (Michter’s bourbon, orange bitters and maple syrup, served in a smoked glass with a garnish of candied bacon) to the light and elegant Italian 75 (rosemary-and-lavender-infused vodka, lemon juice and prosecco).

Reid, who grew up in Colorado and got his start as a barback at a corporate restaurant “when flavored mojitos were all the rage,” worked his way up to become a bartender, then manager at Naples’ Bistro 821, before finding his home at The Bevy shortly after it opened in 2017. Since then, he has held court behind the 16-seat, U-shaped bar, serving drinks with an emphasis on fresh juices and fruit purees. “As Naples is getting bigger, it has more stuff for younger people,” he says. “We have a young vibe, being in a modern building and with craft-focused drinks. Even our regular margaritas are phenomenal, with everything being fresh.”

A self-described whiskey guy, Reid is happy to see the liquor making a comeback in the area. And, he’s also excited about the boon of boutique spirits, like St. George Green Chile Vodka from California. “There are lots of gins coming out with different flavor profiles that are fun to work with,” he says. For the restaurant’s Blackberry Tom Cat cocktail, Reid uses Benham’s gin, a label from California that counts Meyer lemon, peppermint, chamomile and star anise among its aromatics. That’s blended with blackberries, lemon juice and Luxardo cherry liqueur.

The striking, backlit back bar showcases an apothecary-like display of special bottles—aged spirits, high-end whiskeys, cognacs—while shelves suspended from the ceiling hold a curated selection of tequila, gin, rum and other spirits. The wine list pushes into the dozens and demonstrates a wide variety.

The 10-drink cocktail menu frequently changes, with plenty of fun, buzzy concoctions, like The Bevy Punch (a quartet of tropical-flavored rums with pineapple and cranberry juices) and the Sandstone Margarita (a twist on the classic with blood orange, rimmed with lemon zest and chili lime salt). For spirit-forward drinkers, the Woodford Barrel-Aged Manhattan is an exercise in patience: The cocktail rests in a small oak barrel
for 12 days and the extended aging helps the flavors meld, making it worth the wait.

Developing new drinks is a collaborative effort. “Most of our bartenders have been doing this for as long as I have. We’ll go in together, add some insight and tweak the recipes,” Reid says. “That’s the fun part.”