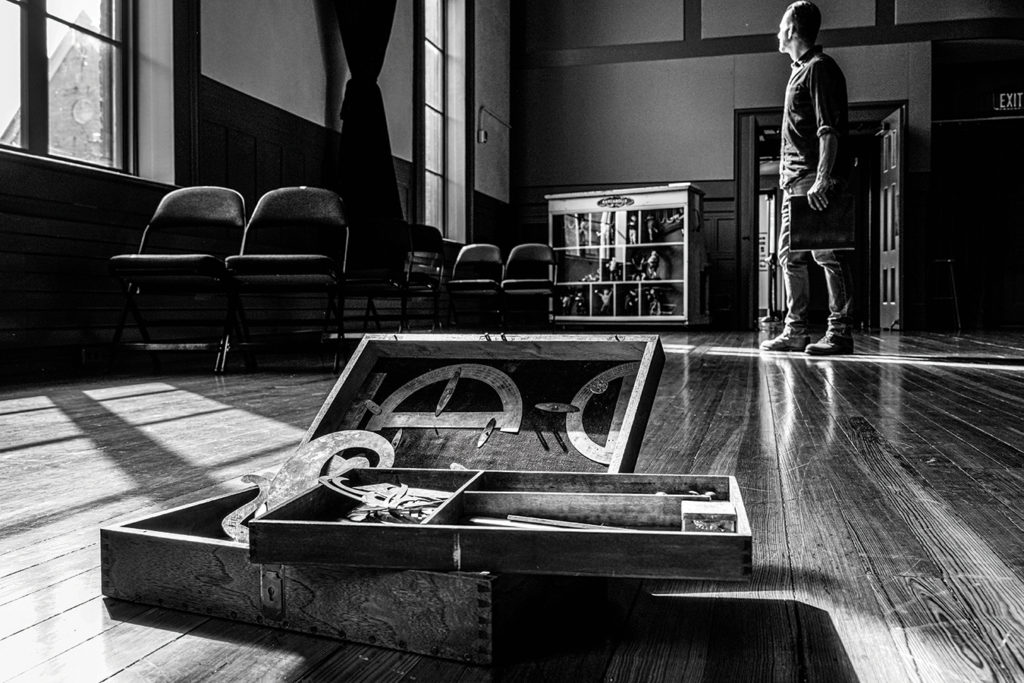 A longtime Gulfshore Playhouse member, Binder lights up the Norris Center stage with his new play, Higher, from Jan. 13-30. (Photo by Ken Pivak)

Naples-based actor, director and playwright Jeffrey Binder waxes as romantically as Goethe and as candidly as Kafka when discussing his new play Higher, set in the Czech city. Binder traveled to the Czech Republic capital in the 2000s. “It was just a magical place. The Soviet Union had just collapsed and this old city had just opened, and people were so generous and so kind, and history was right in front of you,” he says. “It hadn’t been inundated with McDonald’s and still had its core identity.”

After graduating from New York University’s Tisch School of the Arts with a master’s degree in acting, he did the occasional television work on mainstays such as Law & Order and As the World Turns, but theater soon became Binder’s passion. He landed roles in The Lion King and Mary Poppins on Broadway and Side Man in London’s West End.

Eventually, he made his way into regional theater, which brought him to Naples’ equity theater Gulfshore Playhouse in 2015. At the Norris Center, where the theater company still operates until they debut their multimillion-dollar cultural campus, he’s starred as Henry Higgins in My Fair Lady and George Bailey in It’s a Wonderful Life. Binder also directed four plays, including Maytag Virgin and The Lady Demands Satisfaction, and served as the center’s associate artistic director. In 2018, Gulfshore Playhouse premiered Binder’s first original work, Scapino, a contemporary Floridian take on Molière’s 17th-century French comedy Scapin. This month, he’ll debut Higher, his second piece, which is a one-person show inspired by his days as a young traveler in Prague.

No one knows who first described Prague as the “city of a hundred spires,” but as Binder’s script unfolds around the towering, gothic structure of the St. Vitus Cathedral, that architectural moniker suits Higher well. The cathedral doesn’t just serve as the play’s set; it’s an awe-inducing character in its own right, as well as a humbling metaphor for the artistic and spiritual growth doggedly pursued by the two main characters. Protagonist Petrilk is a Medieval builder who fills an underappreciated gap in the long, glorified line of master architects responsible for the cathedral’s construction.

When Binder traveled to Prague, he found himself mesmerized by the tales his guide, a friend he met while there, recounted about the city’s history. As they walked the Charles Bridge across the Vltava River, she told him about an architect of the cathedral—a tragic tale Binder never forgot. “I started to write this story about this architect, this builder, and as I was writing it, I realized that it had so much to do with me and where I was at that time,” he says.

Enter The Wanderer, the other main character in Binder’s play, a young actor who travels to Prague hoping that some exploration will help assuage a recent family tragedy. His narrative intertwines with Petrilk’s. “The Wanderer is essentially me, but it’s more interesting to call him ‘The Wanderer’ instead of ‘Jeff,’” Binder says. “The questions The Wanderer is searching to answer are universal: self-worth, what makes an artist and how do we move past loss.”

The St. Vitus Cathedral looms large behind Binder’s characters, as a daunting vision for Petrilk to coax to life and a ghostly homecoming for The Wanderer to confront. But, the key lesson of Higher is that visions and ghosts—even if experienced centuries apart by two very different men—are the same.

The story is an idea Binder has been mulling over for 20 years. With theaters shuttered last spring, he used the pandemic-induced downtime to draft the script. Though it came together fast—he began writing in May and finished in July—Binder describes the process as challenging. “No one knew when the pandemic would end,” Binder recalls. “In May, we thought, ‘Surely things will be working by November.’ We kept pivoting and pivoting.”

In September, Binder got the green light to begin rehearsals with a skeleton crew and strict protocols. “We considered what’s the safest thing we can do, how can we still create something safely, just to keep on the radar and keep art going?” Binder says. But as the number of COVID-19 cases increased throughout the fall, production halted shortly after it began. By November, the two unions monitoring the production settled on a not-quite-ideal compromise: The show could go on, but only as a filmed production without a live audience, to be released digitally.

This month (a year later), the play premieres in-person, with shows running from Jan. 13-30, and Binder couldn’t be happier. “The audience is the second character in the play when you’re doing a one-person show,” he says. “You have a different conversation every night because the audience is different every night. That interaction and that act of creation you get from an audience are what keeps [performing artists] coming back. It’s so exciting, especially with something you’ve written as a one-person show—it’s just you and the audience. It’s so uniquely human.”