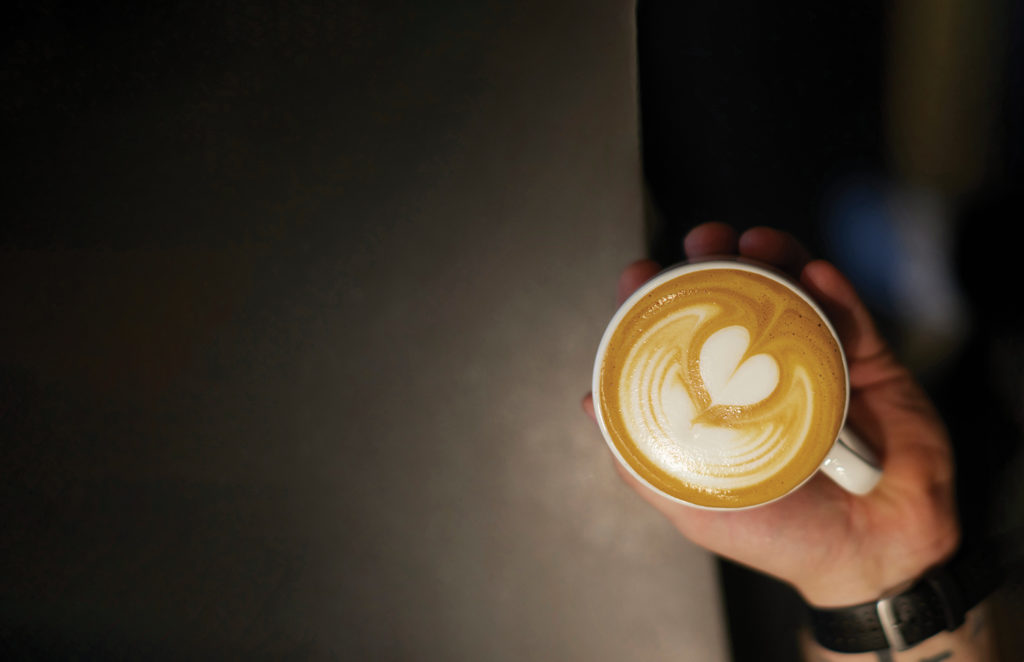 Sitting at the floating bar of the new Narrative Coffee Roasters in the Naples Design District, I almost feel the need to apologize when I order a café con leche. Owners and serious coffee aficionados 27-year-old Caleb MacPherson and 35-year-old William Diaz-Garcia are sipping pour-over from cups that fit into the palms of their hands, using terms like “citrus” and “floral notes” to describe the coffee they’re quaffing, brewed from anaerobic-processed Colombian beans.

Though they can drop serious coffee-geek speak—like the fact that anaerobic processing involves placing beans (with the cherry still on) into oxygen-purged metal vats, where they undergo a fermentation-like process that creates a funky, bright flavor profile—the pair doesn’t smirk at my regular Joe order. Instead, MacPherson jumps up and starts working, making a paste of sugar and house espresso, then topping the drink with heart-embellished foam. “We roast all of our coffee to light or medium roast,” he says, pointing out that the drink isn’t made with the traditional, ultra-dark Cuban-style roast. “The moment you get into dark roast, you begin to add flavors that are not native to the coffee bean. We want to get out of the way and highlight the natural sweetness of the coffee.” Lighter roasts are a common characteristic among the global wave of artisan roasters and indie coffeehouses, dubbed coffee’s third wave, a term MacPherson finds overused. Though many of its core principles, including ethical sourcing and a precise brewing technique, certainly apply to Narrative’s ethos.

With nearly twice as much space as the original Mercato outpost, the new Design District location, which opened in July, houses Narrative’s roasting operations. Behind panes of display glass, a staffer scoops 10-pound batches of green, unroasted coffee beans into the preheated, double-wall steel roaster, which spins rapidly, using conductive and convective heat to evenly dry and roast the beans. Throughout the 10-15-minute cycle, employees monitor the airflow and heat, making small adjustments, which are also logged via software to create a nightly email report for MacPherson and Diaz-Garcia to review. After waiting a minute or two when the coffee beans begin to crack under the pressure of their internal steam—a sign that the roast is complete—they’re spread onto a tray to cool before being packaged into 12-ounce retail and 5-pound wholesale bags.

MacPherson began roasting in his Cape Coral garage in 2016. At the time, he and his wife, Megan, had just moved here from Ottawa, Canada, where MacPherson developed his palate as a barista. Unable to find a suitable caliber of coffee locally, he started roasting about 8 ounces at a time in a Whirley Pop popcorn maker that he’d modified with a drill and couplers to turn the mechanism for even roasting. To spread the word about his new operation, he knocked on doors, building relationships with buyers, while Megan leveraged social media into a small online business. With Narrative outgrowing the garage, the couple drained their life savings to buy a $2,200 sample roaster, eventually moving into a Cape Coral warehouse in 2017. That’s about when they met Diaz-Garcia. The then-32-year-old lawyer, descended from three generations of Cuban coffee growers and Miami cafe owners, had recently come to town from Tampa—where the per capita coffeehouse ratio is one of the highest in the country. “I set out to start my own coffee roasting company, but after looking around, I decided I did not want to compete against Caleb,” he recalls.

When a retail space became available at Mercato in North Naples, Diaz-Garcia stepped in to pitch the shopping center’s management, beating out several national coffee chains and established local operations. “Southwest Florida was in dire need of something like this. There wasn’t a substantive coffee culture,” Diaz-Garcia says. MacPherson continues, “No one had challenged the status quo. Naples was ready for a fresh take on coffee.”

At Narrative, that fresh take begins with ethical sourcing of raw beans that they roast, grind and blend themselves. “When we started, we wanted to work directly with the farmers. As we talked to them, we realized that would be a disservice. A lot of the time, a farmer will get a ridiculous price for a small, top portion of their lot. They’re left with 90% that no one wants to purchase. If they have a bad year, they’re screwed because [their profit] is all based on quality,” MacPherson explains. “Most farmers want security. They want to work with someone who is going to buy their coffee for 10 or 20 years.” So, instead of buying from the growers, the duo partners with importers who commit long-term to the farmers and buy their entire production for the year, regardless of any issues with the crop. They also give incentives for farmers to continue upping their quality. As Narrative grows, they aim to build their own direct, long-lasting relationships with farmers.

To find the right partners, MacPherson and Diaz-Garcia look for like-minded companies that are invested in the details. “We ask questions like ‘What’s the harvest date on this lot?’ ‘What was the moisture content when it was packed?’ and ‘How much did the farmer receive as compensation?’” MacPherson says. “If they have no idea, they’re probably using a third-party seller in the country and they’re not the right fit for us.” Working with importers also mitigates quality risk: Narrative can purchase the best beans, while the rest are sold to lower-quality roasters.

What’s brewing via Narrative’s smart-tech machines changes with the seasons. “I love the really funky, unique coffees that a lot of our customers have not even tried,” MacPherson says, pointing to a 180-hour-fermented Colombian roast sourced from a single farm in the Tolima region, with a juicy body that tastes like grapefruit and tangerine. Other beans might come from Kenya, Rwanda or Ethiopia, while the house decaf is a Swiss Water Process blend—a technique that extracts the caffeine without the use of chemicals. Narrative’s current crowd-pleaser is Colombian Huila with cocoa and brown sugar notes. While most are single-origin coffees, MacPherson says the term doesn’t necessarily convey the unique qualities of the beans: “I love when people say, ‘I love Colombian coffees.’ We have two Colombian coffees right now that are diametrically opposed.” 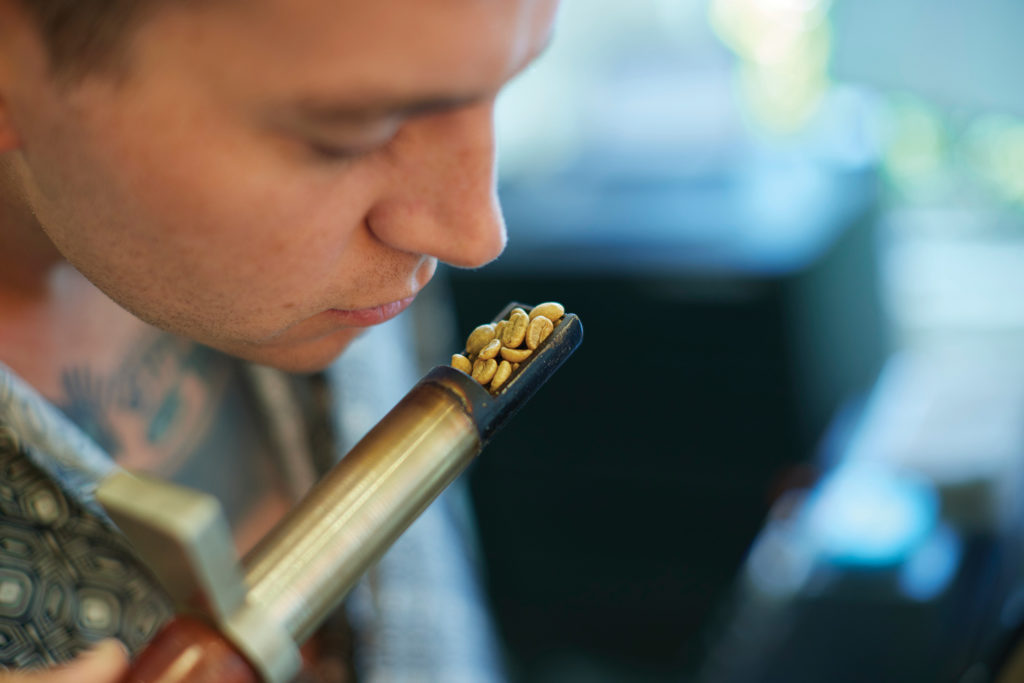 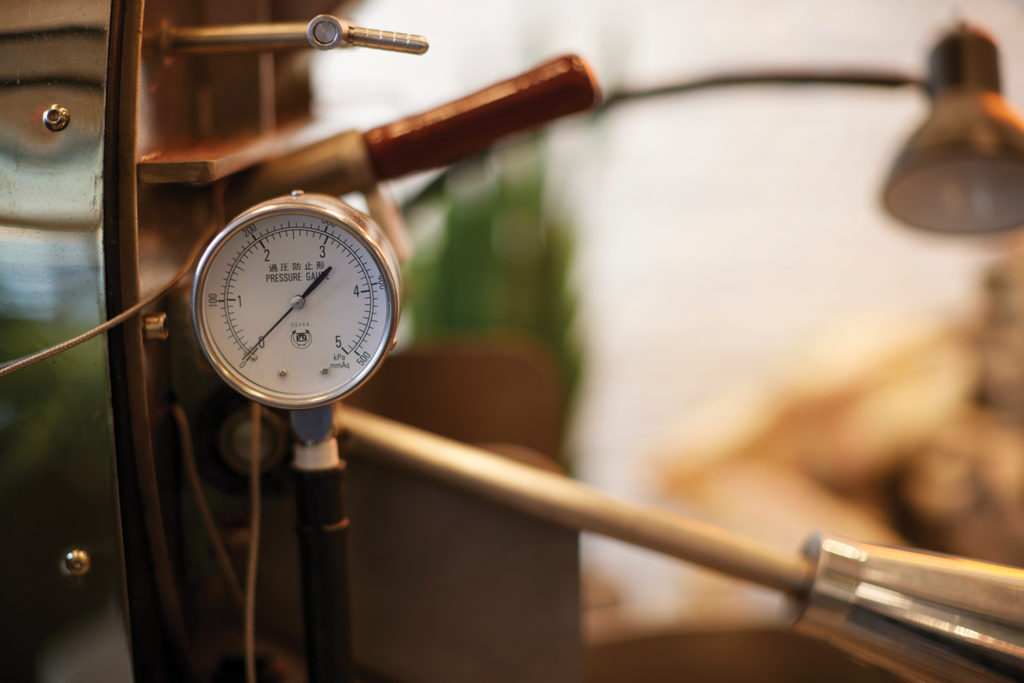 Less than a year after Narrative’s 2020 opening at Mercato, the developers of Eleven Eleven Central, a new condo complex in the Naples Design District, approached the roaster about opening a second location in a street-level space on Central Avenue. Starting with only the structural framework and a dirt floor, MacPherson, Diaz-Garcia and their wives designed Narrative 2.0 to be open and inviting, inspired by coffee shops in New York City. “Everything was handpicked for the shop,” MacPherson says, pointing to the floating bar and La Marzocco espresso machines with Auto Brew Ratio technology for precise measurements. Natural light was a priority, as was partnering with contractors and specialists who don’t cut corners, like Mariah Bakke of Fort Myers’ VIVA Landscapes, who helped design the greenery that spills out throughout the space. “Every brick in the shop was hand-laid. It took 14 days and more money than I care to admit,” MacPherson muses. “We had a fabulous general contractor who helped guide us. [For the floating bar,] we had to engineer how to suspend thousands of pounds of quartz and machinery and figure out how to run electrical and water without it showing.”

The Central location, as the team calls it, feels more like a neighborhood coffee shop. “There are a lot more regulars who live nearby,” MacPherson says, looking around at the mix of patrons from different age groups, backgrounds and coffee tastes that fill the room. “The name Narrative is multifaceted. We wanted to share the story of the coffee and the farmers behind it, but more than that, we believe community is what draws us together. We wanted a place where people from all walks of life would gather to share stories.” In that vein, at the Design District location, Narrative hosts artisan markets, brings in musicians and artists for live-painting demonstrations, teaches home brewing classes and offers cupping sessions (similar to wine tastings). 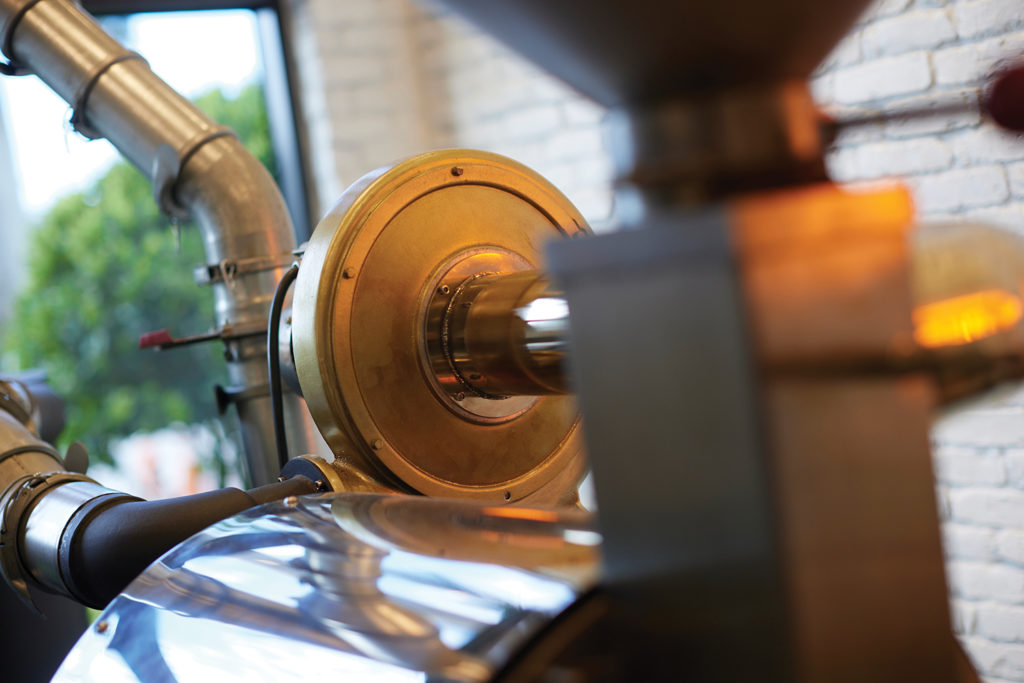 With this latest expansion, MacPherson and Diaz-Garcia are also looking for new opportunities. Since most of their customers opt for iced coffees during the hotter months, aka most of the year, Narrative debuted a canned cold-brew line in 2021—the first to be manufactured in the region. Initially sold at the two shops, it’s now distributed locally through more than 35 wholesalers. And the partners hope to open locations in other nearby markets, like Tampa, though nothing concrete has been announced yet.

They’re also investing in their team. The three managers who oversee Narrative’s two locations all started as entry-level baristas, and MacPherson is standardizing operations and creating training programs for the staff that dives deep into coffee—a mission they hope will help spread coffee culture throughout the region. “If you look at other cities, the first specialty coffee shops on the scene generate the initial excitement, then some of their employees go off and start their own things, which, truthfully, I welcome,” MacPherson says. “I want other shops to have great quality coffee and service. If we’re going to break people away from the chains, it’s going to take a group effort. The more quality coffee we have in the area, the better we all do.”