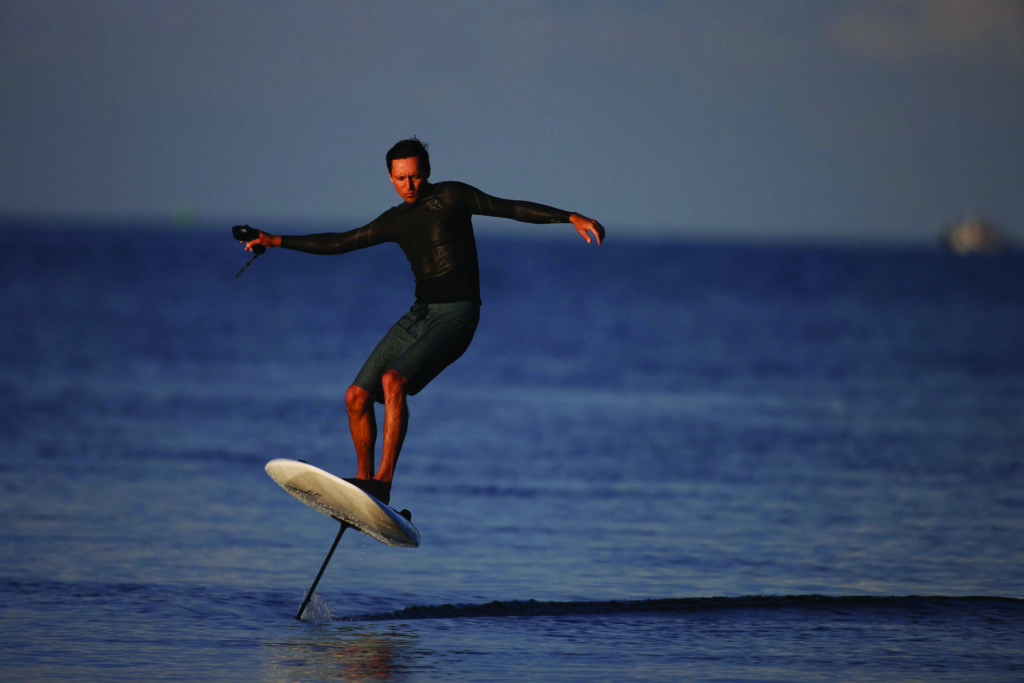 Laura and Eric Foht are used to putting on a show. Every time the co-owners of Naples-based Smile Surf & Sail head out to the Gulf to teach an electric hydrofoiling —known as eFoiling—lesson, they’re greeted by a wave of excitement when they return to the shore. “There’s always a crowd of people that wants more information,” Laura says.

It’s little wonder. From the beachcombers’ point of view, the Fohts and their students are performing magical acts—seemingly levitating above the water. In reality, they’re balanced on boards much smaller than a surfboard, but larger than a boogie board. Laura, a part-time art teacher at Lake Park Elementary School, says the electric hydrofoiling experience doesn’t only look otherworldly—it feels like it, too. “It comes with this feeling of complete weightlessness and flight,” she explains. “My husband describes it as feeling like a magic carpet ride.”

Eric became hooked on kite foiling about 10 years ago and, last year, the couple took up eFoiling. In November, they took the plunge and invested in four boards of their own. It wasn’t cheap. The boards, manufactured by Lift Foils, which is owned by eFoiling inventor Nick Leason’s family, cost about $12,000 a pop. (Other brands including Waydoo, Fliteboard and Takuma manufacture similar products.) Boards include a lithium-ion battery that’s powered by a silent electric motor attached to a hydrofoil wing, a mast with a wing that extends beneath the board, and a handheld wireless Bluetooth controller that tells the board how fast to go. “Most students worry about dropping the remote, but it very rarely happens,” Laura says. “We added a wrist strap to our controllers for peace of mind, but the controllers float and turn off automatically when submerged.”

Since launching Smile Surf & Sail, their van—loaded with boards, helmets, life jackets, wetsuits and booties—has become a welcome sight on the shores of Naples. Students (mostly adults, as they don’t teach young children) gather for classes, which start with a 30-minute on-shore tutorial wherein the Fohts and their lead instructor, Shaun Jacobs, show how to navigate the board and use the remote control. Then it’s time to head out into the ocean where students start on their bellies, shift onto their knees and eventually stand up. “You scoot back one millimeter at a time until you sit up and the board starts to lift off the water,” Laura says. “You’re going to fall off a lot, and that’s wonderful—one of the things we work on is falling safely.”

Hydrofoil innovations are changing the entire landscape of watersports. Not only are they becoming more accessible in places like Southwest Florida, but other related sports are gaining buzz among professional athletes and recreational enthusiasts. With wing foiling, for instance, the hydrofoil board is powered by the wind with a handheld sail instead of a motor. Riders have to do two things simultaneously: steer the sail and stay balanced on the board. “It’s not an easy thing to learn. It’s challenging with lots of room for progress and that keeps people hooked,” Laura says. “We recommend learning how to eFoil first because you have an understanding of what to do on the board with balance and weight distribution.”

While electric hydrofoiling attracts its fair share of adrenaline junkies, Laura says for her, the presence and peacefulness she experiences when she’s gliding on the water serve as a form of meditation. She spends mornings on her board observing sea turtles, manatees, spotted eagle rays, osprey and pelicans. “I had three dolphins the other day that were riding directly underneath my board, playing with me,” she says. She also notes that unlike jet skis or other motorized vehicles, eFoils are emission-free and silent, and therefore they don’t disrupt or pollute underwater ecosystems, so you can coast guilt-free.