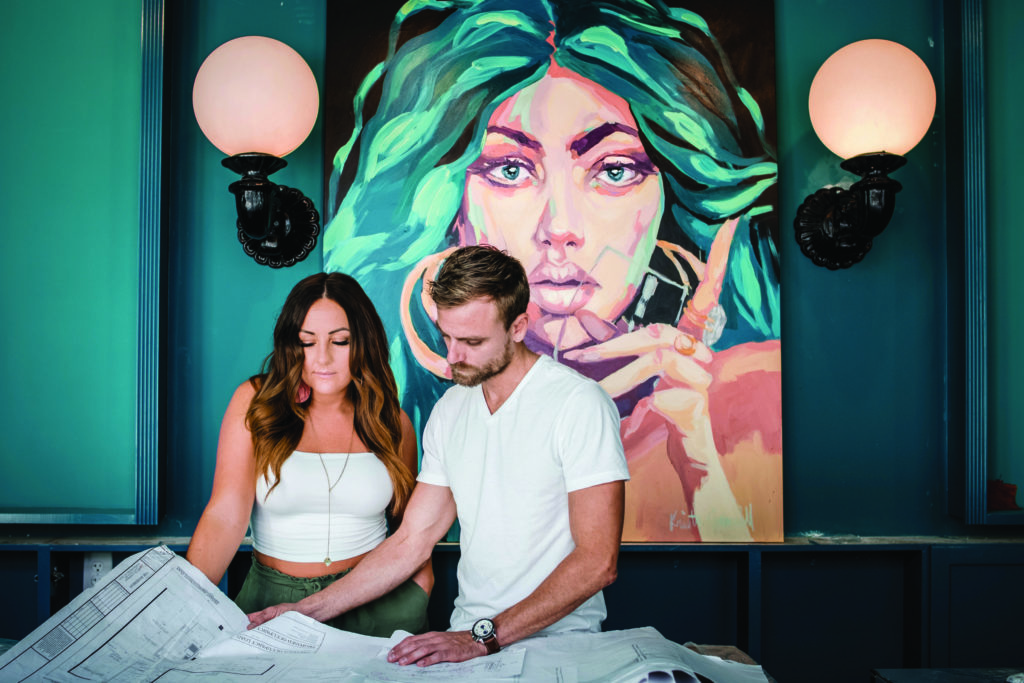 “The time is now,” Brandon Schewe, co-owner of Downtown Coffee and Wine Company in Bonita Springs, says. “The downtown has finally stepped up to our neighbors of Naples and Fort Myers with an elevated sense of hospitality, yet with its own cultural vibe.”

Those words carry weight. Brandon and his wife, Caitlin Emery-Schewe, are trailblazers when it comes to getting downtown’s historic heart beating again. Despite its early days as a thriving community of tomato growers and commercial fisheries, Bonita has long dwelled in the shadows of its better-known neighbors. The opening of health bastion Shangri-La Hotel (now Shangri-La Springs) in the 1920s and the Everglades Wonder Gardens (now The Wonder Gardens) in the 1930s brought travelers and new residents to its streets. However, in the following decades, Tamiami Trail, the city’s Gulf-front and golf communities dulled the historic downtown’s shine. The resurrection was slow in coming, but the look and feel around Old 41 Road has become flush and promising in the past few years. And that’s just the start of good things to come as far as the Schewes are concerned.

Brandon grew up in Naples, while Caitlin moved to the area from Michigan in 2007. The two met through the restaurant business (she was a bartender; he was a chef who cooked at some of Naples’ best restaurants, including The French, Osteria Tulia and BALEEN). They moved to Bonita Springs 10 years ago before marrying in 2016. In 2019, the couple opened Downtown Coffee and Wine—the first new, modern restaurant to debut downtown in decades—in a vintage building on Old 41. The timing of the coffee-meets-wine bar’s opening  (along with the city-sponsored push for revitalization) was impeccable, and the venue quickly became a community gathering point downtown.

In the two and a half years since Downtown Coffee and Wine’s successful opening, other food and drink businesses have followed: CRU Wine Club opened last spring down the road, followed by Chartreuse Craft Cocktail Lounge in June across the street. Two new breweries, Ceremony Brewing and Hopsized Brewing Co., opened in November. And, early this year, farm-to-table restaurant Harvest & Wisdom is slated to reopen at the historic Shangri-La Springs and Naples’ elevated comfort-food haven, Lake Park Diner, plans to debut a sister location on Bonita Beach Road. Many of the owners, the Schewes say, came to the coffee shop regularly before opening in town. “We built these relationships early on. They would come to us for advice,” Caitlin says. “The other business owners in town, like Joe [Minetti] at Grandpa’s Pizza, are super supportive. They come to the coffee shop; we go there. Everyone has a good relationship.”

The couple believes those relationships are an essential part of Bonita’s future. They envision a walkable downtown with indie, personality-filled businesses. “Once there are restaurants and boutique shops, other trendy businesses will come,” they say. They reference neighborhoods, like Wynwood in Miami, where cool bars, shops, galleries and residences are all within walking distance on pedestrian-friendly streets. “In our dream scenario, if you lived within walking distance of downtown Bonita, you could have everything you needed without getting in your car.”

Any day now, the Schewes will add to the area’s growth with The Bohemian in the renovated 1960s-era Entrada building on the corner of Old 41 and Bonita Beach Road. The Bohemian, which embodies current dining trends, like wood-fired cooking and low-ABV cocktails, fills a void for stylish, late-night dining in the city. Other progressive businesses, like studioPLPV architecture and vegan Cleansing Essentials skincare boutique, are also springing up in the same plaza.

The couple hopes to see vintage and natural clothing stores, organic markets, and more arts and festivals coming to town, too. “Experiences are part of it. If downtown was even more thriving, we could do better with the music scene,” Caitlin says. The couple reflects that the centralized Riverside Park, which is home to many of the town’s events, still has untapped potential for the major acts and events that could come to town.

They’re already seeing people adopting a more walkable lifestyle—especially around celebrations at the 2-acre greenspace. “Fourth of July was an amazing example of where our town is headed,” Brandon says. “There was live music in Riverside Park all day, and people were walking from business to business, enjoying life and the fireworks.” Caitlin continues, “Because of the pandemic, everyone is moving to Florida, but there’s still a quaintness here. People want that sense of community. You can go places and run into familiar faces.”