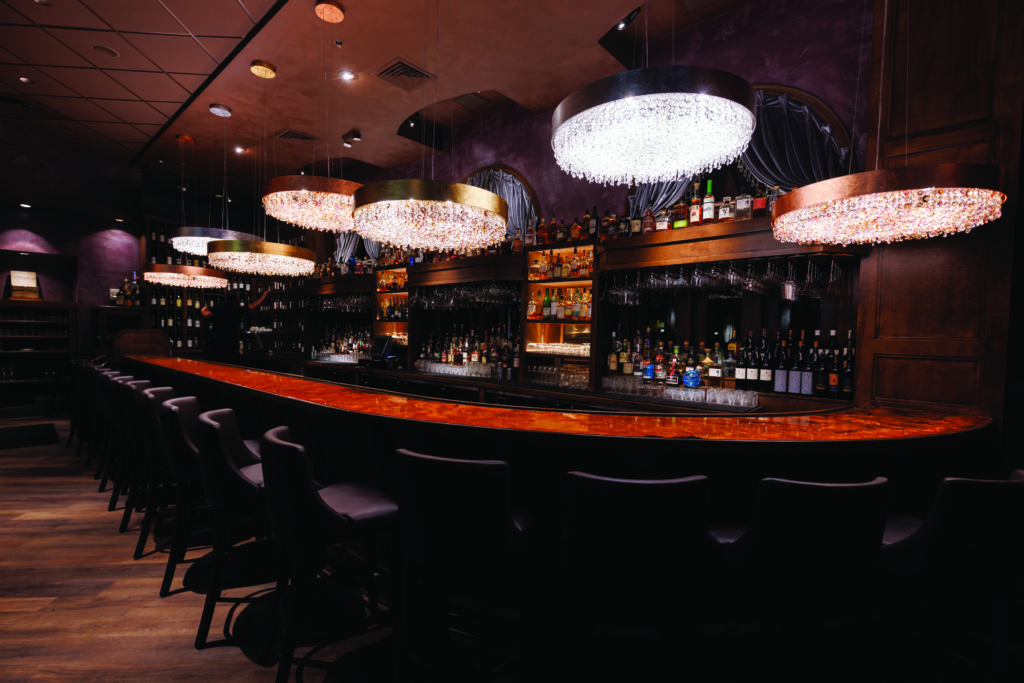 Considering the world of restaurant ownership is filled with more cautionary tales than success stories, hitting the two-decade mark is a milestone worthy of celebration for any establishment. And Chops City Grill in Bonita Springs is making the most of its 20th anniversary, following the October reveal of a million-dollar renovation and a menu overhaul, including an expanded focus on cocktails.

When Chops opened in 2001, Bonita Springs was a sleepy community in its dining infancy. But these days, “the area has finally grown into its own,” Skip Quillen, founder and owner of Chops’ parent company, Culinary Concepts, says. The area’s maturity prompted what Quillen calls a “no expenses spared” floor-to-ceiling renovation of the restaurant, reimagining the interiors with crushed velvet upholstery and ornate Venetian tassel curtains draping windows and booths—all against an elegant palette of lavender and deep wood tones.

The changes are not exclusively cosmetic. At the bar, lit by seven stunning crystal chandeliers, a new leatherbound cocktail menu reads like a book. Its first chapter is dedicated to fine wines from some of the world’s most iconic vineyards and respected winemakers. That’s followed by a meticulously categorized list of nearly 250 spirits ranging from Japanese whiskey to mezcal to aged rum. Bar manager Timo Ortyl says the new menu showcases the impressive collection of small-batch spirits Chops has amassed over the years, like citrus-infused Bluecoat Gin, made in Philadelphia.

The broad assemblage of spirits inspired the bar staff when designing the nearly 50 craft cocktails, many of which have catchy names such as Taiwan-On (a ginger-laced sour apple martini), Down Hill Fast (a bourbon and pear Old Fashioned) and Boodlelicious (a sour made with strawberry-rhubarb Boodles Gin). “When you sit at the bar, you’re not just getting a vodka or gin and tonic,” Ortyl says. “Our goal is to serve drinks that no one else has. We want to be a trend leader, not a follower.”

Bartenders put as much time and effort into the new cocktail menu as the chefs did in revamping Chops’ steak and seafood dishes. The teams collaborated to formulate the syrups, garnishes and other ingredients used behind the bar. It takes several days to compose the strawberry shrub used in the popular Curse of the Leprechaun cocktail. The shrub, along with tequila, lime juice, muddled mint, house-infused roasted jalapeño syrup and a few dashes of Hellfire habanero bitters is gently stirred in a cut glass carafe and then poured into a crystal glass with a charred Italian long pepper. It’s the presentation that first turns heads, but the cocktail’s complex flavors are equally captivating, with balanced spicy, herbal, smoky, tart and fruity notes.

While the menu does include classic drinks, Chops is known for throwing in a few twists. Take the Oh…That’s [email protected]#$*& Good! cocktail, for instance. A sweeter take on an Old Fashioned, it features Rattlesnake Rosie’s maple-bacon whiskey and is garnished with a strip of praline-and-sugar-crusted bacon across the top of the glass. (After two or three rounds of this one, patrons aren’t shy about filling in the blanks in the name.)

Ice also plays a significant role in the creations, with six different types behind the bar, from oversized cubes and spheres to delicate snowflakes created specifically for the CSL (Crazy Sick Love) raspberry and lemon-gin martini. Presentation in ornate glassware adds the final aesthetic touch. A vintage coupe glass, rimmed with large iridescent crystals of pearl sugar, makes a stunning receptacle for the Gone Girl, a riff on the Cosmopolitan that substitutes port wine for vodka. Crafting these creative concoctions isn’t easy: Ingredients are precisely measured, and bartenders practice for hours to get drinks right. Yes, orders often take a little longer than usual. But then again, excellence always does.