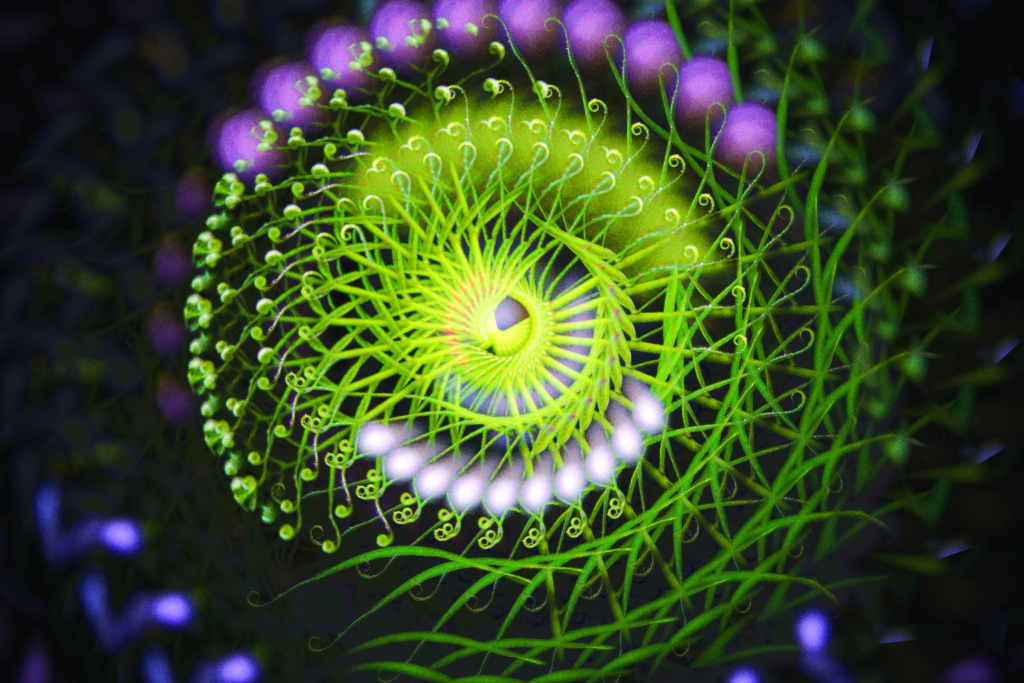 Naples-based Lynda Fay Braun’s works begins as organic matter. Her In the Colony (pictured) is digitally adapted from images she took of weeds, flowers and twigs. (Courtesy Lynda Fay Braun)

In 1839, when French painter Paul Delaroche saw the first photographic process, a daguerreotype, he’s said to have proclaimed: “From today, painting is dead.” Now, even as the silver-plate photos are mostly forgotten and painters continue to thrive, the technology that led to Delaroche’s hyperbolic prediction opened doors for a new art form. Digital art—created with the aid of computer software—gives creatives a growing tech-tool belt with tablet-sketching apps such as ProCreate, 3D modeling software like ZBrush, and NFTs (non-fungible tokens), which hybridize digital art files and cryptocurrency.

Delaroche might have been equally stunned by digital art’s democracy: Anyone with a smartphone can create a digital sketch with their fingertips. Digital art particularly attracts artists with ample experience in more traditional mediums; their backgrounds help inform their use of the technology. Our region is no stranger to its proliferation. Here, three artists—Lynda Fay Braun and Gary Day, from Naples, and Fort Myers’ Tim Smith—illustrate how digital art is as varied and original as the artists who explore the tech-enabled mediums.

Lynda Fay Braun’s work is inspired by what she calls “surprising wonders,” found in the minutiae of her surroundings. Her digital images—photos she takes and then manipulates, primarily in Photoshop—range from the motifs of woven concentric forms in her recent Mandala series to the glimmering silhouettes depicted in her Drawing from Nature works. A lifelong abstract painter with a master’s degree in fine art from Cornell University, Braun taught herself photography. Her foundation as a painter gives her a keen understanding of composition and color, which helps her identify foliage and other natural subjects to photograph. She uses Photoshop to discover what details she can coax out of the photographs, examining “what mysteries have been uncovered with the click of a shutter.”

She draws inspiration from a formative year in the 1970s spent in northern India’s Himalayan Mountains as part of an intense meditation practice—influences that are evident in her use of Buddhist and Hindu geometric designs and her contemplative process. Her current subtropical environment is also a muse. “The foliage in Southwest Florida is so dramatic in shape, and the light so lovely,” she says. “I get excited by the play of light and shadow on leaves or the way a twig along my path catches the light.”

With the help of digital tools, Braun might repeat and layer the image of a single branch into an ornate mandala pattern or emphasize the abstract shapes within glowing patches of light. “I approach photographing even the most common of weeds with reverence,” she says, explaining how she anticipates the intricate and ephemeral final image that results from the organic subject matter.

Gary Day’s artwork may have emerged from sophisticated software, but the inspiration originates from a much older process: printmaking. Day’s digital art swings the pendulum of his studio practice from hand-inking lithography stones to clicking a computer mouse. A professor emeritus at the University of Nebraska, Day graduated from Florida State University in 1976, with a master’s degree in fine arts focused on printmaking and drawing. He went on to study computer sciences a few years later. “Printmaking has always been a commercial enterprise hijacked for an aesthetic purpose,” he says, referring to how artists quickly adapted the printing press (invented in the 15th century by Johannes Gutenberg to mass-replicate the Bible) to reproduce their images. “The same is true of computer graphics. People keep inventing unbelievable tools for artists to adopt.”

His digital artwork includes large, flat-line drawings he calls “digital prints.” Day finds inspiration in multiple sources, such as diagrams of neural networks or the geometric patterns in Islamic art, which he manipulates with 3D modeling software such as ZBrush and 3DS Max. The manipulated images are uploaded to Unity software (commonly used for video game development) and converted into computer game spaces, essentially digital maps where each object or shape of the manipulated image becomes a point on the map. Day then runs artificial intelligence and pathfinding algorithms over the game space to calculate possible routes between points, which stretch like spiderwebs across the map.

Once the design is complete, he uploads the digital print to Photoshop, which allows him greater control over the printing process. He runs each digital image through a large-format inkjet printer multiple times, printing each color individually to layer pigments atop one another. The resulting richness of color is similar to the deep, multicolored prints created through lithography, in which an image is transferred from stone onto paper using oil-based inks. “The parallels between digital printing and lithography are both physical and conceptual,” he says. “As I look at my process, it seems that I have spent a long time trying to make a printer into a printing press.”

A lifelong potter, Tim Smith recalls attending Art Basel Miami Beach in 2002 and asking gallerists why they didn’t represent more ceramicists. The most common answer he heard was that pottery and ceramics were too fragile to be shipped around the world. “At the time, I was getting deeper and deeper into the possibilities of digital,” he says, reasoning that digital art, unlike ceramics, isn’t quite so breakable.  “My contemporary art is always evolving, taking the limitations of pottery as a point of departure, going places that are unknown and uncomfortable. I believe that’s where the learning lies.” By 2008, Smith (who still does pottery and owns Sanibel Pottery studio in Fort Myers) had found an indestructible, mobile medium he could utilize: projection mapping, a process that involves projecting a 3D shape onto a flat surface.

A graduate of the School of the Art Institute of Chicago, Smith returned to the Windy City campus in 2010 to attend a two-week workshop exploring the connections between art and technology. During that trip, Smith and his colleagues viewed an exhibition of digital art at the Museum of Contemporary Art Chicago. “This show opened my mind to so many more new possibilities,” he says.

Now, Smith often projects his “kinetic wafers” (a playful term he uses to describe his images) on the sides of buildings throughout downtown Fort Myers. The bold, geometric mixed-media collages, overlaid on steel, constantly undulate, creating optical illusions. Smith didn’t ask for permission the first time he projected his work on a building at the corner of Dean and Bay Streets during a 2010 Art Walk. Using a ladder, he set up on top of the Hideaway Bar building nearby and pulled electricity from a streetlight to fire up his large-format projector. “I was a little nervous about getting caught and thrown in jail but pushed forward anyway,” he says. Once it got dark, he scrambled down from the rooftop and covertly watched the public react to his work. “I loved their reactions,” he says, recalling how the crowds stopped to take photos and record videos of the installation on their phones. “I loved their reactions,” he recalls earnestly.

Smith’s risk-taking paid off. Since that first guerrilla-style venture, he has projected his kinetic wafers on buildings throughout downtown Fort Myers, and the city has awarded him grants to develop his craft. “Having the ability to create without getting your hands dirty is a whole new adventure,” he says.