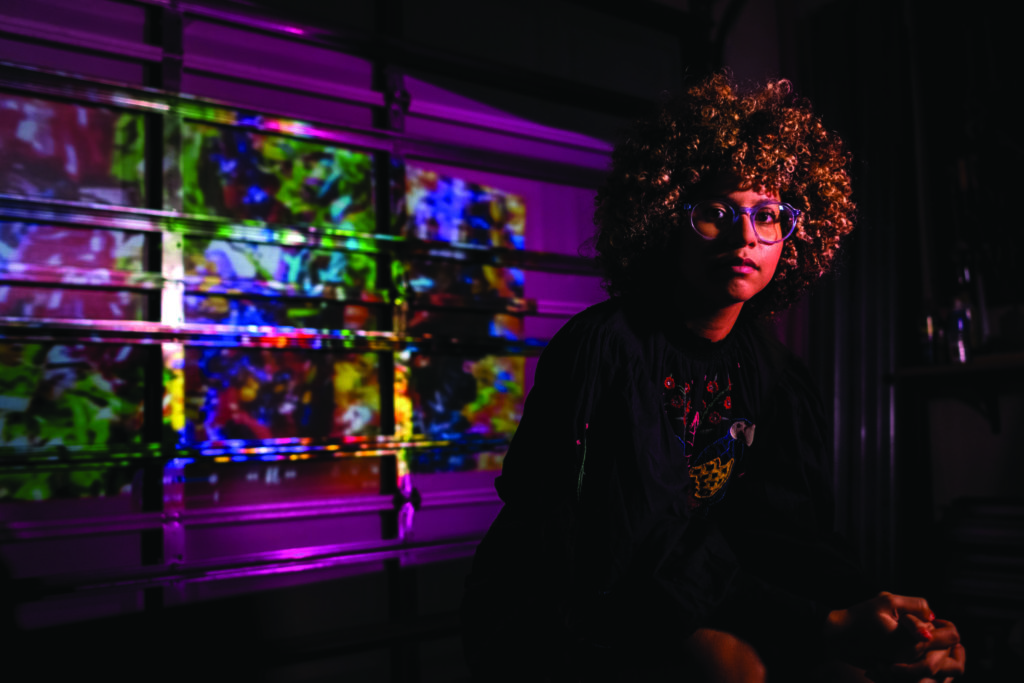 Many artists wax poetic about the moment they realized they were an artist. Cape Coral-based Martha De la Cruz is prone to a little more pragmatism. “I was always a maker, even as a child, but it wasn’t until I was hired as a work-study student at the Bob Rauschenberg Gallery that I fully committed to pursuing a career in the art world,” she says. After nearly five years at the Florida SouthWestern (FSW) State College gallery, De la Cruz’s aspirations now stretch to producing artwork that acts as a conduit, channeling her multicultural experience to find common ground with new audiences.

De la Cruz grew up in her native Dominican Republic before moving to Southwest Florida when she was 18. She worked at the Bob Rauschenberg Gallery while earning an associate’s degree at FSW and, later, a bachelor’s of fine arts at the University of South Florida. Rauschenberg famously regarded art as “non-elitist,” in that it allows individuals from vastly different backgrounds to connect and understand one another. This is evidenced by his respected foundation and residency program on Captiva, where artists working in all mediums and from all walks of life hone their craft and collaborate, as well by his well-documented impact on developing class-defying artists, like street art pioneer Jean-Michel Basquiat. “Rauschenberg’s guiding ethos and his work in the local community gave me hope that I didn’t have to be born into the New York elite or attend an Ivy League university to participate in the art world in meaningful ways,” De la Cruz says.

Rather than using conventional artistic mediums like paint, she utilizes video, installation and sculpture to create mostly 3D works that incorporate and blend commonplace motifs from Caribbean cultures, from rosaries to roosters. “I use art as a means of trying to understand something. I don’t know where the process is going to lead me when I start a project,” she says. “I tend to begin with a problem that interests me and then let my curiosity lead me to places that may or may not be useful in understanding that problem.” De la Cruz’s work is autotheoretical, blending historical context, research and her own experiences to address troubling historical issues of ‘raza’ (the Spanish term for ‘race’ or ‘ethnic group’ within Latin America). She wryly combines everyday objects to highlight the longstanding repercussions of colonialization.

De la Cruz’ 2021 sculpture, Techo de sin (Roof of Without), is an exaggeration of the typical poor house in the Dominican Republic and other impoverished nations, with the Zinc roof built directly on a dirt floor without walls. The structure, visible from its partially framed gable and overhead, is made from stolen and donated materials, a nod to how disadvantaged populations often shrewdly reuse waste out of necessity. Inside the roof is a lightbulb that’s illuminated 10 minutes a day, alluding to the recurring power outages and lack of stability in impoverished nations. Though the structure appears woebegone, it’s far from slapped together. There’s a precision and a tenderness in its construction, demonstrating that those discarded materials are of priceless value to the builder—whether it’s De la Cruz or the denizen she’s channeling.

“Despite the existence of borders, we all experience very similar issues,” she says. In Se fue el cable (The Cable is Out), De la Cruz draped a rosary on the neck of an old, wall-mounted television to reflect Catholicism’s vast role in Latin America. And in Permutations of Power, she built an ornate, wooden structure, inspired by chairs and thrones from the 14th, 15th and 16th centuries, when African tribes hid their rituals in the carvings, under the guise of adopting European traditions. “I feel I have an obligation to translate the things I see to others, knowing that art has the capacity to spark change,” she says. “With that, most narratives are a lot bigger than me, and I can’t control how my art is perceived, so in a way, it’s about connectivity and finding a shared experience.” Or, as Basquiat so succinctly put it: “I don’t think about art while I work. I try to think about life.”