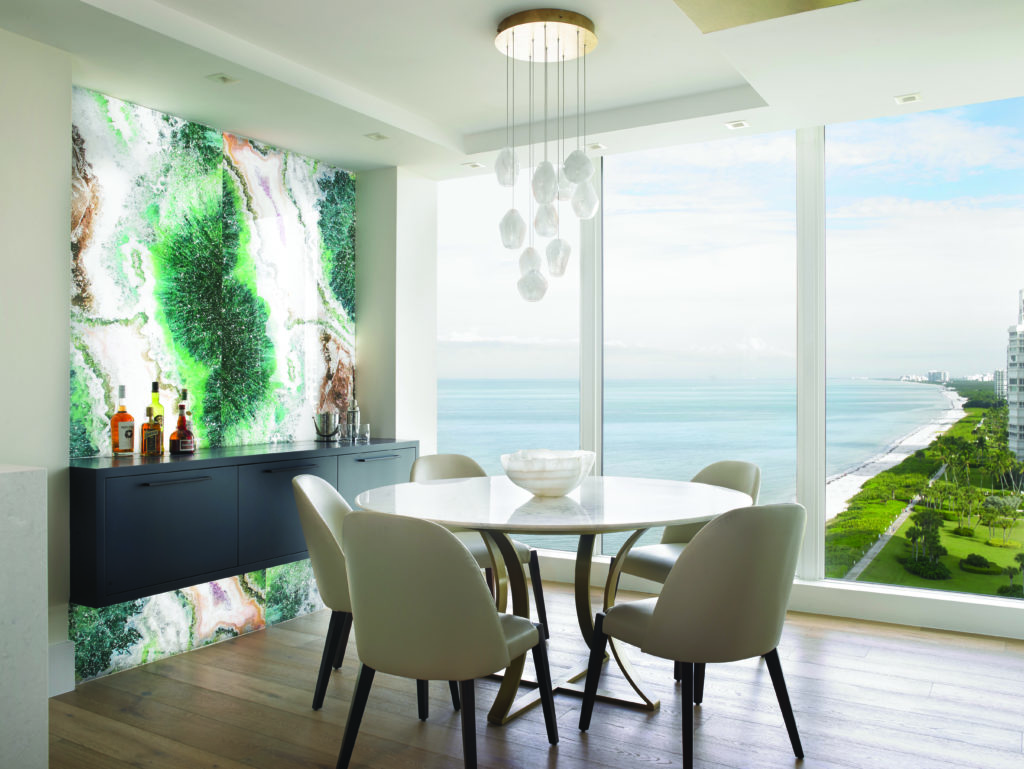 When a penthouse comes with spectacular views of the Gulf of Mexico, it can be difficult to devise interiors that can compete. But Laurie Adams and Tom Carmen were undeterred. The couple wanted to use the picturesque panorama as inspiration for a dramatic restoration of their 2,400-square-foot, three-bedroom, three-and-a-half bathroom La Mer residence and they knew exactly how to accomplish the feat. That’s because the couple wasn’t exactly new to the building—or renovation—process as they already bought (and sold) two other units in the building. For this project, they reached out to BIG Renovations & Design and interior designer Jeffrey Fisher, who quickly decided that everything existing had to go. “The entire floorplan changed,” Fisher says. “[Cabinetmaker] Marcus Jelley did the spatial planning, as well as the cabinet design. He opened it all up.”

The goal of the top-to-bottom makeover was for the unit to look and feel like a new build. “They had a really strong sense of what they wanted and didn’t want,” Fisher says. And, what did they want? Clean, not fussy, with plenty of pattern play, exemplified by dramatic Vetrite, a backlit panel from Italian mosaic firm SICIS’ architectural glass line, which stuns as the kitchen backsplash and as a feature wall in the dining area. It includes a mix of every shoreline color visible from the apartment’s floor-to-ceiling windows: greens, golds, dark teals, blues, browns—all layered as if a massive agate had been sliced razor thin.

The glass was the launching point for everything else in the space, including the upholstery. The same coastal mix of greens and blues translates to the main living room’s sectional and the agate-patterned fabric on the four swivel Vanguard chairs in the conversation area. The custom wool area rug beneath the chairs also pulls in the hues of the Vetrite panels. A hammered brass coffee table from Arteriors and a Ralph Lauren LED chandelier add sparkle to the space.

More brass tones show up in the living room via a walnut-paneled fireplace feature wall with a linear fireplace and metal band surround that nods to midcentury modern design and the homeowners’ appreciation for clean lines. The paneling also helps separate and define the kitchen and living room. “The panels above the fireplace open to reveal the TV and storage,” Fisher says. “This elevation frames the entire area.” Walnut is repeated on the ceiling above the 8-foot kitchen island, adding warmth to the space.

Fisher chose a minimalistic approach for the primary suite, where obeche veneer panels washed with a gray stain create a dynamic frame for the views. The custom bed faces the water and features filled bookshelves on the back of the headboard, which is the first thing you see when you walk into the bedroom. “It’s very hotel-like,” the designer says. “You feel like you are in a Four Seasons.”

If you find yourself invited over, Fisher recommends sitting in one of the four swivel chairs facing the Gulf to look for dolphins. “It doesn’t get any better than that,” he says. But honestly, there’s not a bad seat in the house. 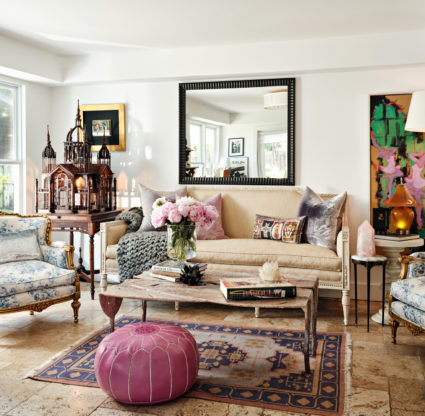 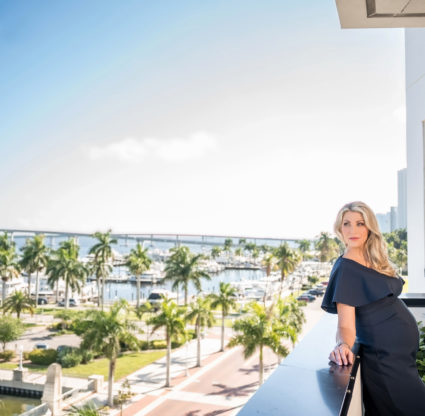