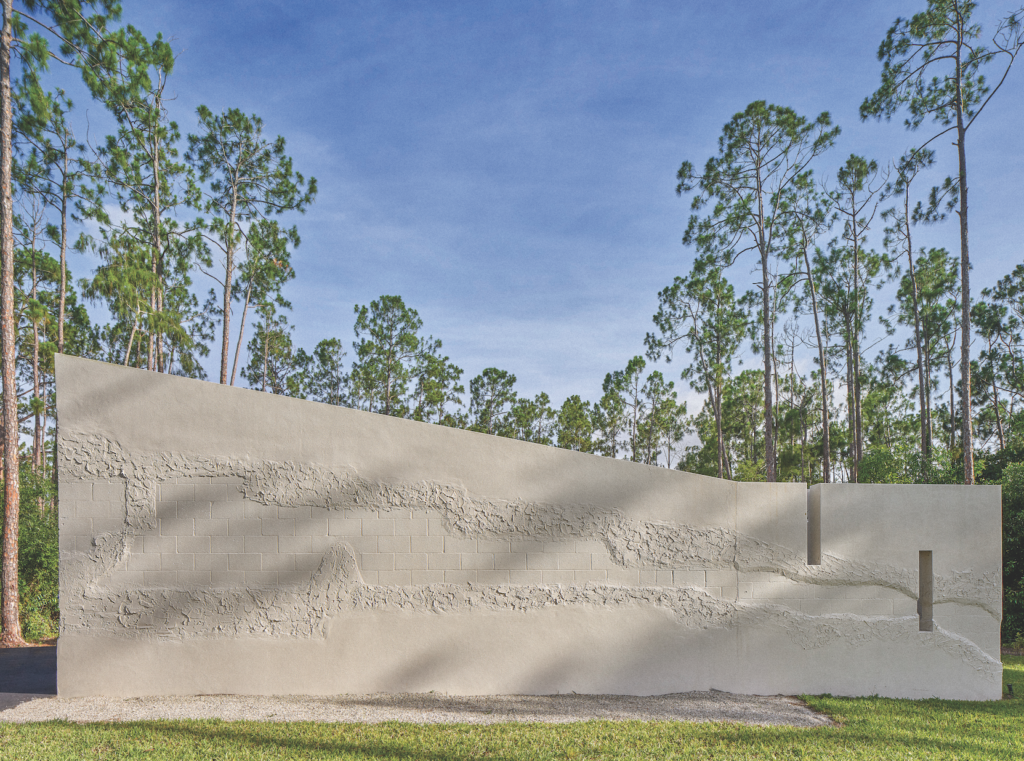 A few years before the coronavirus eviscerated offices across the country, architect Jeff Goldstein received an email from a friend who was designing a house on a secluded lot in Naples. The homeowner wasn’t interested in replicating the cookie-cutter Mediterranean-style residences that fill Southwest Florida; he also had what was considered an unusual request at the time. “He wanted the ability to work from home and not feel like he was working from home,” Goldstein, a founding partner at award-winning Philadelphia commercial design firm DIGSAU, recalls. “He also wanted the house to be both a place of introspection and a place to entertain family and clients, so the layout had to be very flexible.”

Also on the design brief, the residence had to take inspiration from the courtyard architecture of houses found in South and Central America—an archetype with elements that can be interpreted in a modern way. “The structure solved a lot of his privacy and security concerns but still allowed the ability to engage with the landscape,” Goldstein says.

Adding inspiration from Moroccan riads and the wast ad-dar (middle of the house) courtyards of the Middle East, Goldstein designed a strikingly abstract take on the style using an angular perimeter wall to define and connect three separate structures: a single-story main house, a two-story tower (where the homeowner can entertain clients) and a garage. The 2,575-square-foot compound rises from the bald cypress and slash pine trees like a mirage, its stark white facade in relief against bold blue skies and brilliant green foliage.

It almost feels like an abstract ruin, says Naples architects Brandt Henning and Michaela Reiterer Henning of Hlevel Architecture, who collaborated with Goldstein to help root the design in the material vernacular of the region as well as navigate local building codes and troubleshoot on the ground in real-time. Goldstein adds, “We wanted to make it have some element of curiosity and mystery—almost like you discovered it in the middle of that pine forest.”

Interiors are similarly delusive. The house is configured as a free-flowing U-shape, but sliding partitions made of plywood panels can be pulled out or folded back to separate spaces. “It’s designed to have as many as four bedrooms and as few as one,” Goldstein says, noting that the homeowner can go from entertaining clients to hosting family and friends to enjoying a private space for work or quiet reflection by simply pulling a wall open or closed. All of the sleeping surfaces, except the one in the primary bedroom, are Murphy beds that disappear into the wall when not in use, making each room as multifunctional as possible. “The house was ahead of its time in terms of flexible living,” Henning says.

Prophetic though the design was, it wasn’t without its challenges. “It’s not easy to do something different,” Goldstein adds. “But the client’s conviction and desire to see this through was really rewarding.”

“The wall makes the property feel like a monolithic structure,” Goldstein, who collaborated with Hlevel Architecture’s Brandt Henning and Michaela Reiterer Henning on the project, says of the stucco garden wall that forms the perimeter, maintaining privacy and minimizing the residential aspect of the home. Perpendicular niches along its surface evoke the patterns of the surrounding trees’ bark, while the stark white hue creates a blank slate for the everchanging shadow play created by the sun’s movement. Goldstein also conceived a textural roughening of the stucco in various places to give the structure a timeworn effect, inspired by the grooves and notches in the trees’ bark.

The home is configured as a free-flowing U-shape, with sliding partitions that can separate spaces to encourage maximum flexibility. “It’s designed to have as many as four bedrooms and as few as one,” Goldstein says, noting that the homeowner can go from entertaining clients to hosting family and friends to enjoying a private space for work or reflection by simply pulling a wall open or closed.

Borrowing from a technique used in Middle Eastern houses, the architects strategically placed windows to help control the airflow throughout the home, channeling courtyard breezes that efficiently cool down the structure at different times of the day. “They also frame the narrative of your view,” Goldstein says. “The house constantly reconfigures itself because of the light and location of the windows.”

“The house looks different than what you would expect from the outside,” Goldstein says. “Only once you breach the exterior gate do you realize how strong the relationship is between the house and the landscape.” Located at the center of the main structure, bathrooms deliver the same effect thanks to skylights and clerestory windows that “provide a striking experience of the Southwest Florida sun,” he says.

Flexibility is also achieved through a series of multifunctional furnishings, including a mobile kitchen island set on casters that can fold out and into itself to accommodate different uses. “It’s so cool to watch it transform in the moment,” Hlevel’s Henning says. “It’s a prep area and breakfast counter, it turns into an L-shaped catering configuration, and then when it’s folded in on itself, it becomes a table.”

The architects worked to identify typical regional building materials and apply them in unexpected ways. The play of textural and smooth finishes in the stucco is one example.