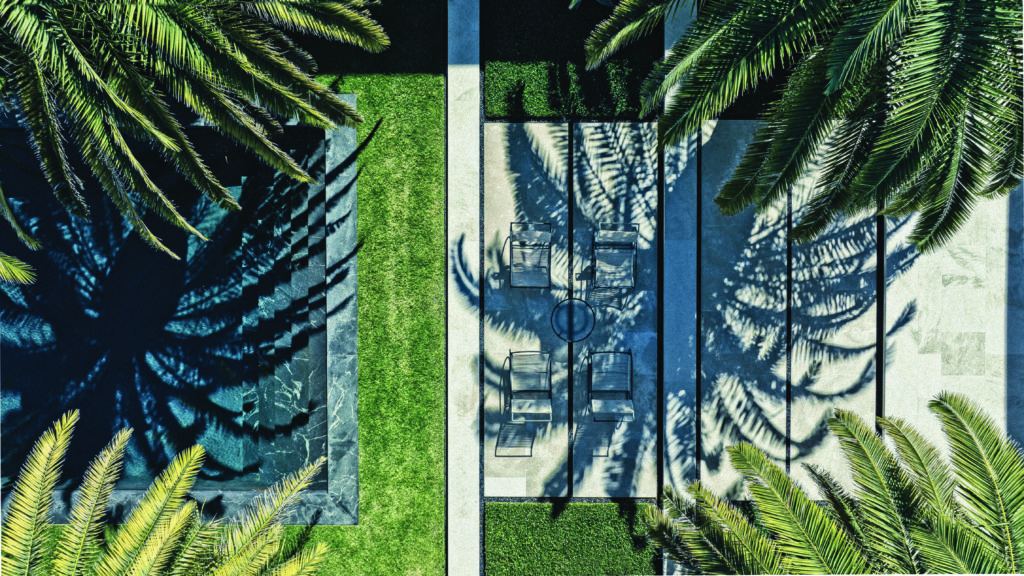 Some people turn to meditation apps; others visit the spa. But for Len and Wanda Zaiser, finding serenity is as easy as going home. “When you walk into this house, it almost feels like you’re entering into something monastic,” Naples architect Mark J. Leonardi says. The philanthropist couple collaborated with the architect after they purchased a large waterfront property in Port Royal. “Everything seems connected,” he says.

That’s because, as in all of his highly personalized projects, Leonardi took an exacting approach to the design. Every detail in the 8,700-square-foot home—which was inspired, in part, by another house he designed, but soon took on a life of its own—contributes to an overall feeling of tranquility achieved through the repetition of shapes and forms. With the exception of the living room, which soars to 15 feet, all of the ceilings are a standard 10 feet high, and the rooms are arranged on a single level, with most bedrooms on one end. Windows are defined by a series of vertical rectangles rather than large picture windows centered on a view; the figure continues in the hallways and doors, many of which guide the eye toward a singular focal point, whether a piece of art or a sculptural outdoor water feature, like the ones in front of the property, which Leonardi also designed. “There’s a real homogenizing consistency that creates a certain rhythm throughout the entire building,” he says.

The same effect arises from a sense of seamlessness evoked by the uninterrupted transitions between surfaces. Floor-to-ceiling glass panels meet Portuguese limestone flooring in the same way the turf meets the hardscaping in the property’s exterior patios and walkways—a function of Leonardi’s horticultural background (his father was an agriculturalist) and his close collaboration with landscape architect Ed Westwood on the project. Meanwhile, the omission of baseboards and casings lets walls float above the stone floors for a feeling of continuity. Storage and technical systems are concealed behind hidden doors and sweeping soffits. Leonardi even extended the idea to the ceilings, where the fixtures are nestled with concealed flanges to underscore that sense of unceasing flow. “There’s a reason for everything in this building,” he says, noting Wanda’s steady input and Len’s attention to detail, a consequence of his engineering background. “It’s all a reflection of the attitude of Len and Wanda.”

The Zaisers—who were coming from a beautiful but decidedly darker, wood-heavy Harry Weese-designed home subtly inspired by Len’s love of boating—took a hands-on approach to conceptualizing the property, beginning with the organization of spaces. The property features an organic arrangement of seven structures connected by glass-filled hallways, contributing to the resort-like atmosphere that was heavily influenced by tropical modernism in Malaysia, Indonesia and Singapore—countries whose architecture has long inspired Leonardi.

The configuration encourages a constant state of discovery—the idea of alighting on something novel rather than merely transitioning to another space—at every turn. Rather than defaulting to the banality of negative space, the architect takes advantage of every square inch between the facades of the structure’s components to “build layers of sequence and privacy as one moves from the front to the back.” Gardens, courtyards, water features: all are intended to elicit a response that feels a lot like enlightenment.

In the Zaisers’ home, the experience begins when you reach the first set of mahogany gates that lead into the motor court. Another pair of 5-inch-thick, 11-foot-tall mahogany gates with concealed hardware leads the family and their inner circle to the forecourt, where twin reflection pools set the stage for a peaceful transition before you even walk through the front door. “Water is a really important element—the sound of it, the look of it, the coolness you feel from it,” Leonardi says. Directly beyond is the main living room, with hallways that satellite out into the kitchen, bedrooms and other spaces, and out back into the lanai and the pool lined with royal palms, gently drawing focus to the view of the waterway behind the home.

The orientation—combined with the abundance of windows and wide, open outdoor spaces—creates an everchanging light display inside as the sun rotates around the property throughout the day, imparting natural illumination that Wanda describes as celestial. “Unlike some of these box- or U-shaped houses you see, the building becomes very thin,” Leonardi says. “Light can penetrate it in different ways all day long.”

While the light creates its own dynamic design element, Wanda chose to leave the interiors clean and spare, preferring to double down on the soothing nature of the building’s architectural envelope. After nearly two years in her home, she likes to let the design develop organically as the space reveals its desired interior components, filling the holes with cherished but highly collectible furnishings and art that have special meaning to the couple and their family. A Jeffrey Bigelow table has pride of place in the living room; a cowhide chair in the primary bedroom sparks textural interest; and a collection of brass animal sculptures by Sergio Bustamante, which Len started collecting before he and Wanda were married, surprises visitors throughout.

The result is a residence that serves as a potent yet imperceptible antidote to the frenetic nature of modern life. “There’s a graciousness to the space,” Leonardi says of the relationship of the various structures. “In a lot of these Port Royal homes, you can stand at the street level and look right through the entire building, but this home is more about layers of spaces. We were creating spaces between things to establish this sense of intimacy, like what you’d find at a museum or gallery.” Call it a sort of visceral hush. But for the Zaisers, it’s just home.