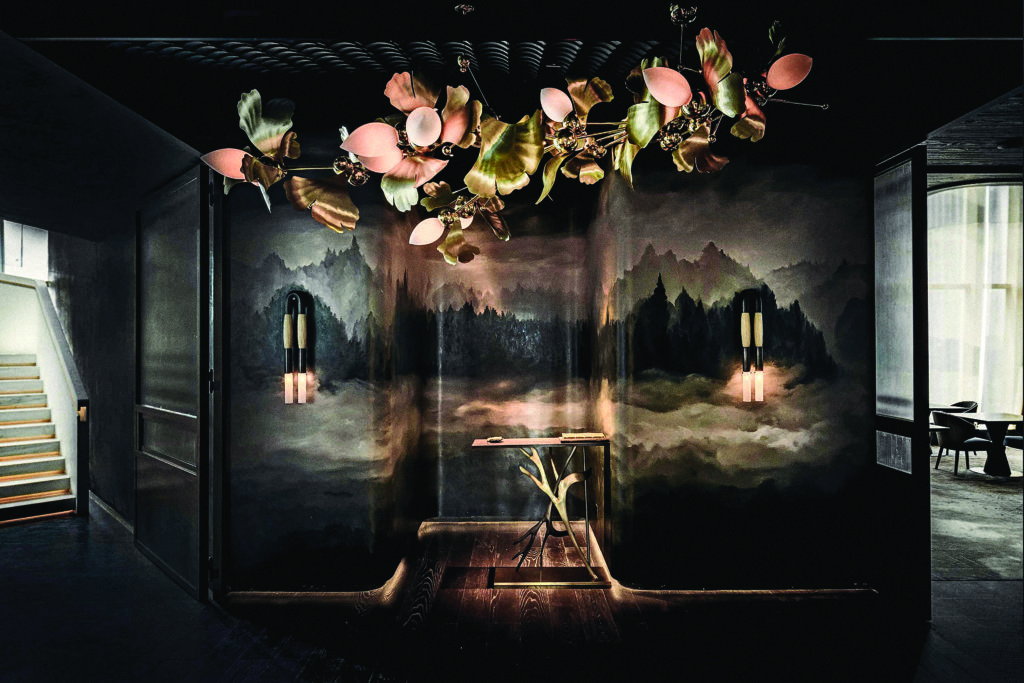 Niamh Barry refers to her pieces as “three-dimensional drawings in bronze and light.” This one, called Muscularity, which takes more than 840 hours to create, is a study of organic forms— from the patinated ellipses to the curvaceous vessels balanced within them. These feature an interior finish of warm gold and a mirror-polished plate that emits soft light. Available through Maison Gerard.

Design darling Dimorestudio is the creative mind behind this sensuous fixture reminiscent of a dress that might’ve graced the dance floor at Studio 54. The Charleston has a fringed shade (available in three colors) that’s mounted on a light panel. Available through The Future Perfect.

Inspired by the leaves of the ginkgo biloba tree, the Ginkgo Bespoke features five variations of individually crafted bone china leaves that are meticulously placed. It’s available in various sizes; the larger styles feature about a thousand leaves and can take as long as three months to create in artist Andreea Braescu’s Bucharest studio.

The drawings of German naturalist and zoologist Ernst Haeckel inspired Regis Mathieu’s Jellyfish, a gilt bronze and crystal fixture designed to highlight 18th-century metalsmith skills in a 21st-century design. The pieces are crafted in his world-famous workshop in southern France, where he and his skilled team also restore chandeliers for the likes of the Paris Opera and the Palace of Versailles.

Lighting luminary Lindsey Adelman’s latest piece, Paradise, is meant to “capture a spirit of nomadic wandering … with elements [that] are swagged, pierced and illuminated to generate an unexpected clash of couture and punk.” The American-made piece is highly customizable (add any number of clear, amber or pink glass spheres; nickel or brass chains; fringe pieces; or khaki or black lashings), with textured globes blown by New York-based Michiko Sakano and Pennsylvania’s Vetro Vero studio and woven electrical wires by textile artist Taryn Urushido.

At a glance, Maxim Velcovsky’s Memento Mori looks like a modern chandelier with some parts artistically askew. In reality, it was inspired by the fixtures made of human bones in Sedlec Ossuary, a World Heritage Site in the sculptor’s native Czech Republic. Look closely, and you’ll see bones in various forms and scales arranged to create this piece, made of handblown and pressed glass.

Based on the design of architect Josef Hoffmann’s 1914 archetype of the Jugendstil chandelier, the Cologne, by Austrian lighting titan Lobmeyr (their pieces hang at the Metropolitan Opera House in New York) upholds the legacy of the original. More than 100 years later, the piece is still manufactured by the same family, using nickel-finished brass and hand-cut crystal beads. Art nouveau floral motifs weave through the design, which is customizable with different finishes and bespoke ornamentation. Available through METHOD & CONCEPT at The Collective in Naples.