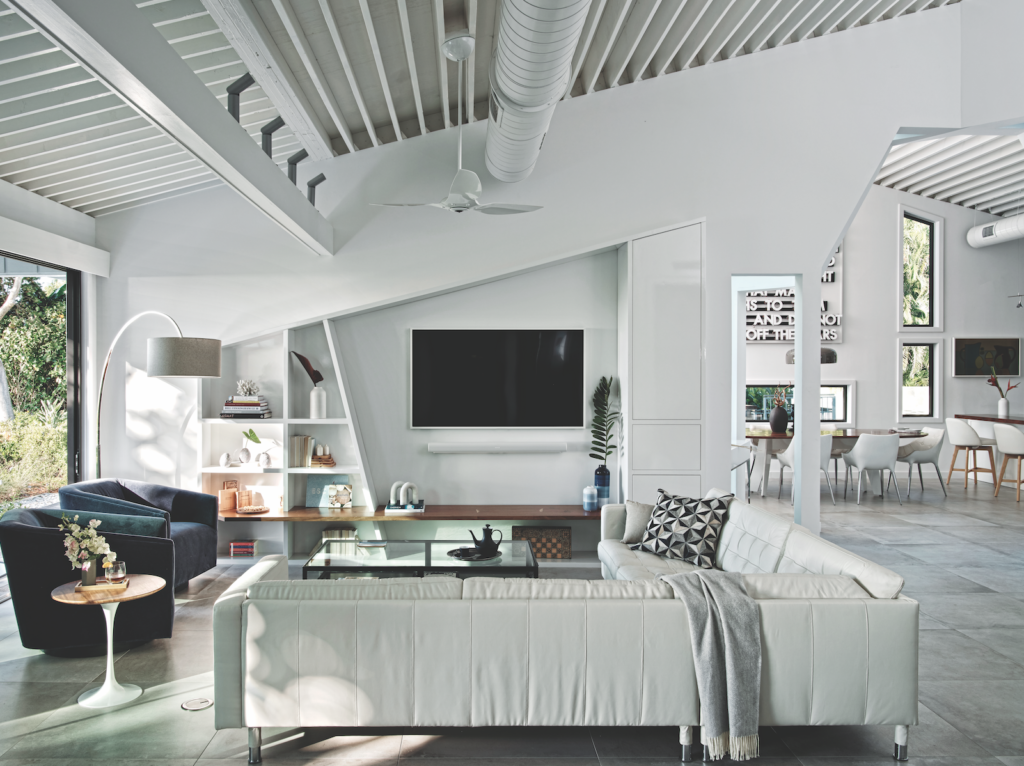 Owens took great care to preserve the intent of Moore’s original design while modernizing the space and increasing its functionality. In the kitchen and dining areas, a wall was removed to create an open entertaining space that maximizes the Gulf views. (Photo by Dan Cutrona)

A beach breeze flows directly through the home, swirling in a courtyard as it moves inland on Captiva Island. From the front, the home looks modest: a low sprawl broken by gentle angles, like a placid sea broken by a wave. “You feel like you’re living in and amongst the landscape,” the homeowner says.

Designed by Charles Moore—a California-based architect credited as the father of the postmodern design movement—the original floorplan cited “pods” of interior spaces around a central courtyard. Outdoor walkways connect each pod of rooms, and one long path leads through the center of the home, passing by the courtyard without entering any rooms. “It was built around a principle of true indoor-outdoor living—the way you walk through the landscape, it feels like it belongs here,” the homeowner says.

When the family bought the home in 2017, it had been renovated once but was in need of some upgrades. To some, the project might have been considered a teardown, but the owners saw the value of the original design. “It was both quirky and modern and didn’t feel dated at all,” the homeowner says. “We loved the sense of coexistence between the inside and outside.” They enlisted Joyce Owens, the principal of Architecture Joyce Owens LLC, for the renovation, knowing she would have the eye and skills to preserve Moore’s vision while upgrading the space for today’s living. After all, Owens gained experience working with historic buildings during time spent in London, and in South Florida, she’s made a name for herself as an expert in modern, environmentally and regionally conscious beach home design. She’s also written extensively and curated exhibits about the region’s distinct midcentury modern heritage. “It was an honor to be invited to work on this house,” Owens says. “We had to be careful and sensitive with the design and clearly understand the original intent of Charles Moore.”

Now, the floorplan consists of three pods, each a group of rooms, centered around an outdoor courtyard and connected by glass-enclosed hallways and exterior walkways. The main entryway opens into the largest pod, a high-ceiling foyer and living room, with a wall of windows offering a view of the Gulf beyond. A dining area and kitchen connect to the living area through a unique archway that joins two skylights in an X shape. Down a hallway, another pod holds the primary suite and a guest room; on another corner is a pod with two ensuite bedrooms. “Everywhere you look, it’s green, lush and pretty—this home reflects how Captiva Island was in the 1970s when it was less developed,” Owens says.

Most of the changes the architect made were to upgrade tired spaces and modernize them. “We were working with the goal of improving on the work of a great architect, using modern technologies and capabilities,” the homeowner says. For example, the Plexiglass skylights in the living area’s archway were replaced with hurricane-proof glass.

They took down a wall between the kitchen and dining room, opening the space to the Gulf of Mexico view—and honoring the more casual way this family dines and entertains. Skylights were added to various bedrooms to brighten them up, and low windows were placed in one hallway and the dining room to expand the view. “Now, during the day, no matter the weather, we never have to turn lights on because it’s so bright,” the homeowner says. “As we go into the evening, it’s beautiful the way the light changes.”

To capitalize on the scenery, and for security reasons, the front entryway was moved to the right, onto the same axis as the foyer and living room. “Now, you can see right through the house out to the beach,” Owens says. She enlarged the decking along the main entryway and the back of the home to expand the outdoor living areas and make them more functional. “Before, you stepped right from the sand into the home, which was lovely but not very practical,” she says. She was also able to enlarge the windows along the entire back of the home to make the whole living area seem taller and invite in the view.

Other changes included upgrading surfaces throughout. Owens replaced clay tile flooring and high-contrast wall tile designs with more subdued tones, like large concrete-look porcelain tile floors and white backsplashes that don’t distract from the scenery. She painted all of the dark wood beams and accents inside the home white to match those that had already been painted and to lighten the overall space. “We found some of those decorative accents distracting—for us, it’s not about the house but the view of the water,” Owens says. Together, these changes maximize the common areas and reaffirm the connection to the setting. “We didn’t want people living in their bedrooms; the whole point is to enjoy being together and to take advantage of the climate,” the homeowner says. “We want to really appreciate what an incredible spot this is.”

Further emphasizing the connection to nature, many of the built-ins and pieces of furniture were made from a slab of black walnut the homeowners salvaged from a property up north. “It came up in conversation that they had these pieces of milled wood just sitting in a barn,” Owens says. The architect, who often designs furnishings for her projects, used the angles of the house as inspiration for a dining table, low storage benches, and a bookcase that showcase the walnut and complement the architecture. “Joyce found ways to subtly play off the home, like using a shape that evokes the boardwalk that transects the house,” the homeowner says. “And the color of the wood is a nice contrast to the light, bright feel inside.”

Today, the residence stands as a well-considered homage to Moore’s original vision. “We’re so grateful to be the current custodians of this amazing home,” the homeowner says. And for Owens, it was a once-in-a-lifetime opportunity to work on a historic Captiva project originally conceived by a revered architect. “Every once in a while, I have to pinch myself—how did I get this honor? I’m so glad my client understood how special and unique this space is, and I hope we’ve done it justice.”