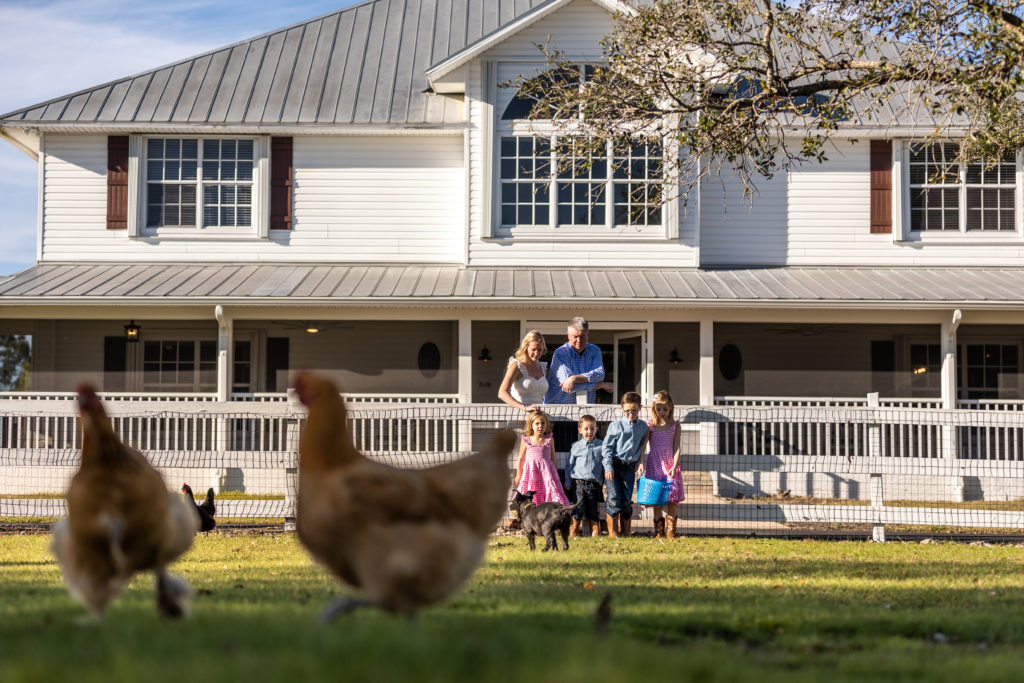 The path to building a family life hasn’t been easy for Jessica and Ryan Benson. The two got married in 2007 when they were 28, but when they decided to have children, it became clear that something wasn’t right. “We started seeing a reproductive endocrinologist at age 30, and after a few years of interventions, we realized I couldn’t carry,” Jessica says.

After weighing their options, they opted for surrogacy. They connected with a woman nearby through a clinic and implanted two embryos—both took. “She is a really special woman,” Jessica says. The couple attended all the doctors’ visits with her and were there for the birth of Banks and Rory, now 7.

Three years later, with two embryos from the same egg harvesting procedure, they tried again. “The doctor couldn’t believe we wanted to do it again, but we felt strongly that we wanted a bigger family,” Jessica says. This time, they opted to use a surrogate in Massachusetts due to concerns about the Zika virus in Florida.

Just like with their first babies, they were adamant about attending appointments. Jessica was about to board a plane home after one appointment when she got a call from the doctor that it was time. “She called and said, ‘I’m leaving the airport!‘ I flew up that same day,” Ryan says. “I made it in time for the birth.” That day—and, technically, the next, since their youngest daughter was born just after midnight—they welcomed Beckham and Ellie, now 3. “We joke that Ellie just wanted her own day,” Jessica says.

The couple is grateful for the two “incredible” women who helped them become parents. Jessica says her kids are starting to understand the family dynamics. “We tell them, this is the woman who grew you in her tummy when mommy’s tummy was broken,” Jessica says, adding that raising two sets of twins has its challenges and its perks. “It’s a lot of work, but everyone always has a buddy, and it’s fun to see them team up—sometimes it’s older versus younger, sometimes girls versus boys.”

By 2020, life was pretty full. The younger twins were a year old, so Jessica had reduced her work schedule as a nurse anesthetist to one day a week. Ryan was running the Naples-based building firm, A. Vernon Allen Builder, which he and a partner had bought out just before the older twins were born. Plus, Jessica, who was born and raised in Fort Myers, and Ryan, whose family moved to the area when he was in middle school, had a full calendar of social and family obligations.

Then COVID-19 hit, shutting down schools, playgrounds and most public activities. But, as Jessica says, “It was also this hard stop—finally, we had permission to say ‘no.’”

The family retreated to a small vacation home they had on Sanibel Island. “The beaches and nature were still open, so there was always something to do,” Jessica says. The more time they spent out there, the more they liked the slower pace. They sold their home in Fort Myers and bought chickens. “It was something to do during COVID,” Ryan says. “And the kids really enjoyed it.” One day, their oldest son said he wanted to be a farmer, and Dad realized he felt the same way. Soon after, they found a 10.5-acre horse farm in Alva, with a house surrounded by pastures and bordered by oak trees. They saw it the next day, fell in love and bought it.

Over the past year, they’ve gotten settled in the new home, developing their own brand of farming bit by bit. “We Googled ‘cows for sale’ and bought them off a Craigslist ad,” Ryan says with a laugh. The family’s menagerie has since grown to six cows, 35 chickens, about a dozen peacocks and ducks, and three goats. They’ve also become dog people after their first two goats fell victim to Florida panthers.

Now that school’s back in person, the Bensons live in a recently purchased home in Fort Myers during the week, while a Florida Gulf Coast University student cares for the animals on the farm. Jessica works as a nurse at Canterbury School, where their children are enrolled, and her mom helps in the afternoons, steering kids with their homework and bath time before Ryan gets home.

But every Friday, they head back to the farm. There, the pace is slow and the Wi-Fi is even slower. The kids wake up and head outside, often not returning until sunset. “Our oldest heads to the pond with a fishing pole and would still be there at night if we let him,” Jessica says. On Friday nights, they watch a movie together—with unlimited candy, a real treat—and on Saturdays, they cook something that takes all day, then play games together or make s’mores. “The kids count down the days until we go to the farm,” Jessica says. “They have space to be independent and feel trusted.”

Everyone’s learning about farming, too. The kids collect eggs from the chickens, corral the goats into the stable and feed the animals. They’re also working on a garden. Jessica and Ryan are slowly improving the structures on the property. “We started on the inside, to make it livable, and now we’re working on the outside,” Jessica says. “It will probably always be a work in progress,” Ryan says with a laugh.

Through it all, they count their blessings: among them, the women and the doctors who helped build their family, the many people in Fort Myers who support them day-to-day, and the circumstances that led them to this farm, where they make memories as a unit of six. “Being out here just feels right,” Jessica says.