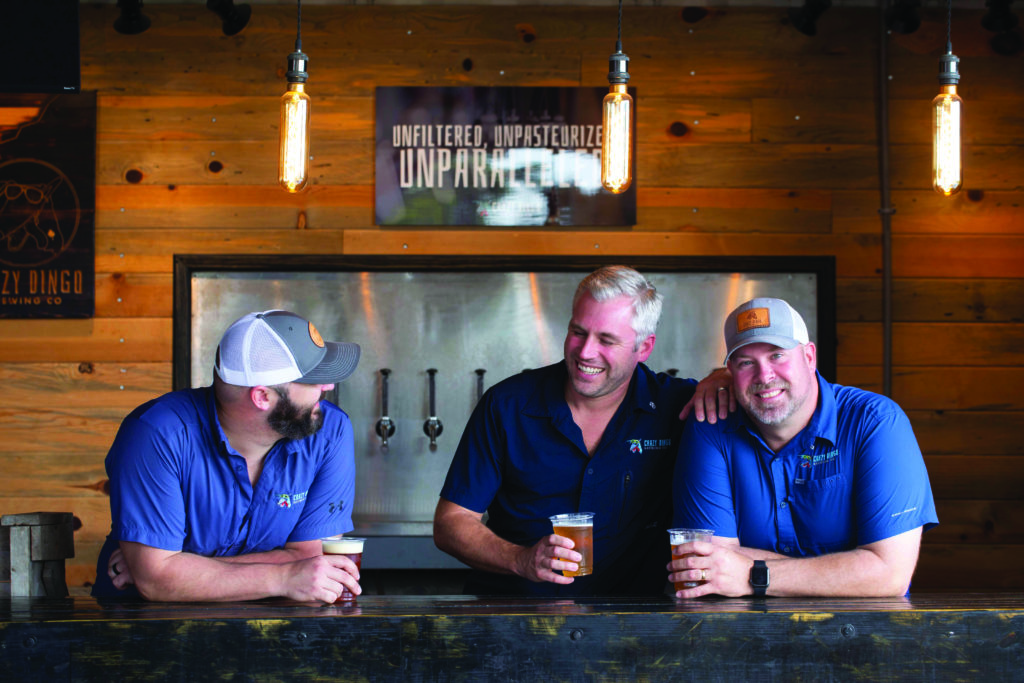 It’s hard to get excited about a brewery these days when there are so many, but Crazy Dingo Brewing Co. manages to stand out. Maybe it’s the mangoes growing a few steps from the bar. Or it could be the sheep.

Crazy Dingo operates out of a couple shipping containers with an open-air tasting room on 5-acre, family-owned Southern Fresh Farms in Fort Myers, offering beer drinkers something rare in the region: the chance to drink a farm-to-pint beer on the land where many of the ingredients are grown. The rescued animals—part of the farm’s agricultural park, including a playground and guided tours—are a plus. “When we say it’s a mango wheat, you can bet the mango was grown right here,” Stu Paasche, Crazy Dingo’s co-founder, says. “You’ll notice the difference. You’re going to taste that mango.”

Crazy Dingo, which was named after one of Paasche’s Australian shepherds, started like many craft breweries: a couple of friends experimenting with homebrewing. After meeting at a friend’s barbecue, where they both brought homebrewed fruit-forward beers, Paasche and co-founder Dan Esperon started brewing together, converting a room attached to Paasche’s garage into a mancave and brewery where they could serve beer to friends. They did well in a few local competitions, and in 2019, they decided to open to the public, partnering with the McMahon family, owners of Southern Fresh Farms.

The McMahons have farmed Southwest Florida for three generations, dating back to 1947, when Robert McMahon Sr. started growing mums and gladiolus. The family transitioned to land conservation in the 2000s and started Southern Fresh to explore sustainable farming practices. Robert “Bo” McMahon III helped develop the farm’s business plan for his parents, Shelly and Robert McMahon II. “Beer was in our plan from day one,” Bo says. “We knew from the beginning that we had the opportunity to create something that hadn’t been done [locally] before by combining the farm with a brewery.”

Paasche, Esperon and partner Mike Schwab jumped at the opportunity to set up shop on the property. “Florida was built on agriculture, on family farms like Southern Fresh,” Paasche says. “Brewing on a farm makes sense to us. People can come here, see some antique tractors, walk between the peppers or strawberries, and we give them a taste of Old Florida.”

A sense of nostalgia doesn’t denote outdated practices. Southern Fresh Farms employs windmills and solar panels to power some of its farming operations, a recirculating irrigation system to minimize water use, and hydroponic and vertical farming practices that take up less land while producing a higher crop yield. Crazy Dingo has adopted some of those techniques, tapping water from the farm’s aquifer to stay off the city’s system. (Plans are underway to install solar panels to power the brewing operation.) Paasche likes the sustainability element of the operation, but access to fresh produce is more essential. Since Crazy Dingo’s garage-brew beginnings, the beer has largely been about fresh ingredients.

“We love brewing with fresh fruit,” Paasche says, adding that one of their most popular beers is Nite Cafe, a banana-Nutella stout that uses bananas grown on the farm. Southern Fresh’s guava and mangoes have made their way into different Crazy Dingo beers, most notably Florida Native, a mango wheat beer that’s become a staple. Paasche plans to use some recently planted blackberries and chilies in the near future. “The farm plays a huge role in so many different aspects of the brewery,” Paasche says. “Our beer is unfiltered and unpasteurized. Not having processed ingredients comes through in the flavor.”

With the help of the McMahons, the brewery has even managed to successfully grow hops, the vine-ripened flowering cone that contributes the bitter essence to pale ales and IPAs. American hops are typically grown in cool-weather climates. Still, Crazy Dingo has rows of Cascade hops thriving in the Florida heat and humidity, yielding three crops a year, which doesn’t cover the brewery’s needs but allows for experimentation. “We might be the southernmost hops growers in the country,” Paasche says. “It gives us a chance to throw fresh Cascade hop flowers into our IPAs, so we can make wet-hopped beers a few times a year, which is totally unique in South Florida.”

It seems to be a recipe for success. Crazy Dingo, which is only open on weekends, is often packed with families meandering between the hop vines or wandering to the farm’s petting zoo—home to rescued cows, goats, chickens and a mini donkey.

The brewing trio often maxes out their one-barrel system, offering five to 10 beers on tap, ranging from a hazy IPA to a French-style bièr de garde, as well as selections from other Florida breweries. While Paasche knows they’ll need to upgrade their brewing system soon to keep up with demand, they’re in no hurry to grow beyond their farm roots. “We have a lot more invested in this than just money,” Paasche says, adding that the brewery is still a side gig for him and his partners, who also have 9-to-5 jobs. “Crazy Dingo is a cool concept with a personal vibe, and we’ve seen breweries lose that when they grow too fast. We want to maintain what makes us attractive in the first place.”