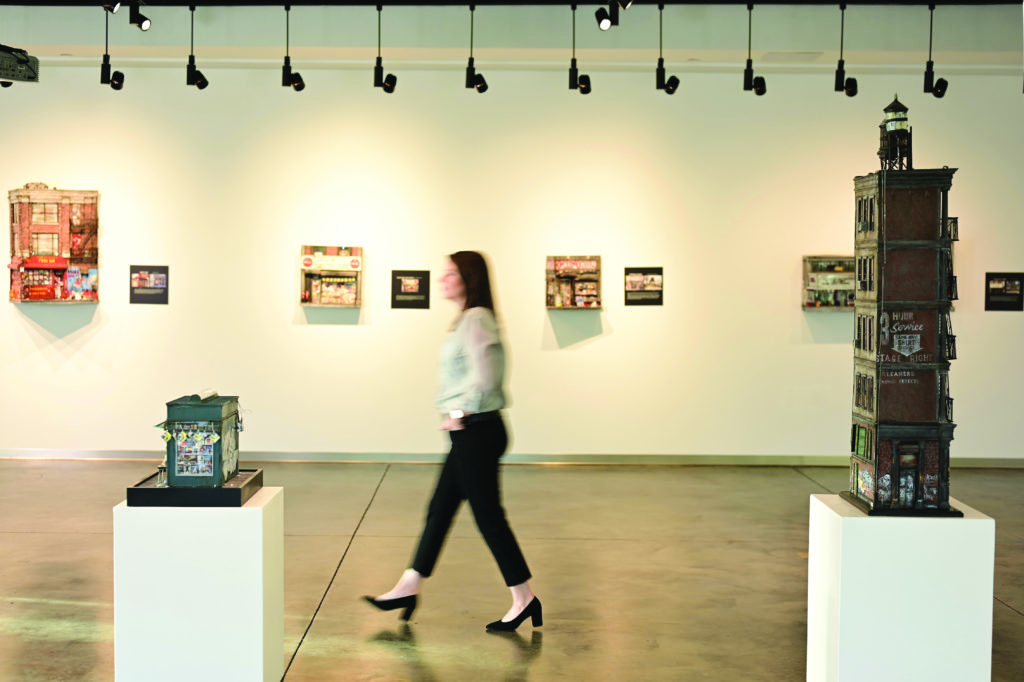 A tattoo peeks out from beneath Lauren Huff’s sleeve: A miniature inking of the Venus of Willendorf, a 25,000-year-old sculpture of a voluptuous female body, believed to be a fertility symbol. It tells you everything you need to know about Huff. In a few short years, the 32-year-old has built a rock-solid reputation as the programs and gallery manager at BIG ARTS, Sanibel, thanks to her avid curiosity and keen understanding of past and present cultures.

The Lee County native didn’t expect to stay in Southwest Florida. After graduating from Savannah College of Art and Design (SCAD) with a bachelor’s in fine arts in 2013, she worked as a visual arts intern at BIG ARTS. Although she toyed with the idea of finding work in a bigger city, the region’s dizzying population growth and the ensuing demand for more visual arts programming made her education at one of the country’s most acclaimed art schools both needed and appreciated locally. Huff stayed on and worked her way into her current role.

She had already slated exhibitions to fill the freshly minted Dunham Family Gallery when BIG ARTS opened its new facilities in January 2020 when the pandemic hit. Rather than cancel the programming, she created BIG ARTS’ Virtual Galleries. Artists installed winter and spring shows as planned and photos of the works were displayed in digital 3D spaces that the audience could ‘walk’ through. Sanibel’s transient seasonal patrons requested that BIG ARTS keep producing the Virtual Galleries even as the pandemic waned so that they could stay connected with the art center when they were out of town; the galleries are now a fixture of all in-person exhibits. “The new gallery space allows for us to do more than just two-dimensional works on the walls,” Huff says. “With multiple projection spaces, a complete strut system, concrete floors and wireless sound system, we can really push the boundaries of the traditional gallery idea.” Last spring, the art center hosted Miami artist Aida Tejada’s Urban Layers exhibition, featuring multimedia pieces including installation, video and experimental photography. Huff and her team encourage artists to make the space their own.

Despite the successes, Huff deals with some unique locational challenges. “Geographically, being on the island can be a bit disconnected from the rest of the region,” she says. She makes it a point to bring in regional artists, citing A Beautiful Struggle, an exhibition from Fort Myers-based photojournalist Kinfay Morotti, which mixed his images with found objects from the Dunbar neighborhood. “Kinfay’s images showcased the triumphs and struggles of a community striving for racial equality,” she explains. “The show came together organically and gave a peek into a local area that most on Sanibel may not know about.”

Future shows include partnerships with Lee Memorial System’s Arts in Healthcare Program, Florida SouthWestern State College and a collective of female rugmakers from Guatemala, to name a few. “Just because we’re on an island doesn’t mean all we have to offer is the typical island art,” she says.

She stays motivated when she considers the benefits art brings, especially with the downright tumult of the last couple years. “Art is another form of language, but a visual one,” she says. “As we all know from cave drawings, art can communicate emotions, feelings and things happening in the world. We could see more healing and more conversations if we could all just take the time to look.”