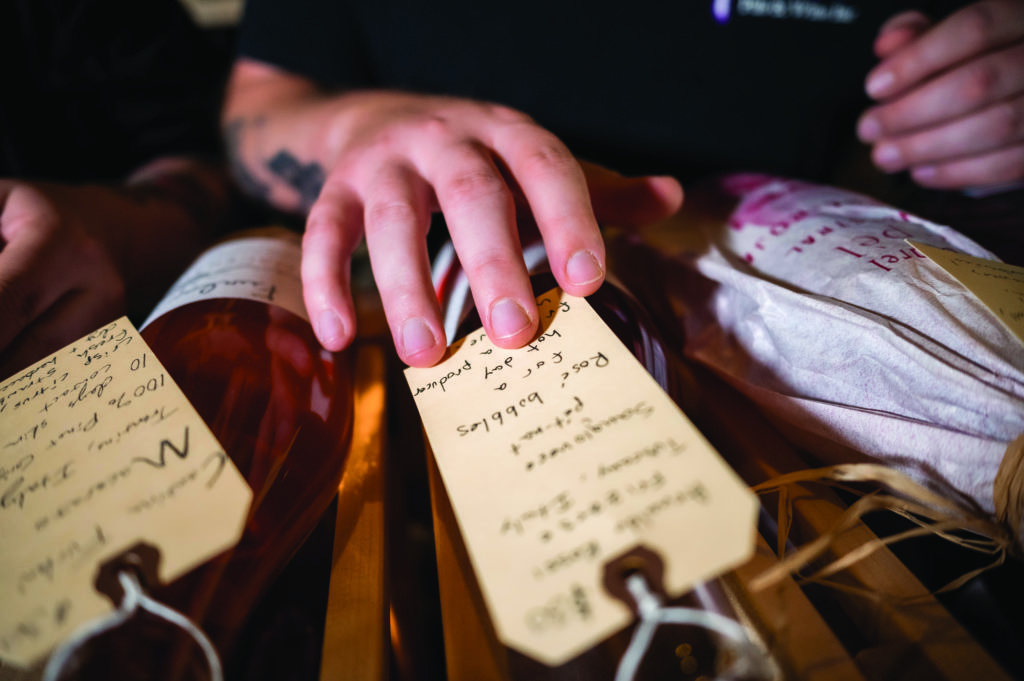 When Naomi Biber and Ryan Lay opened Palace Pub & Wine Bar in Cape Coral in June 2019, they wanted to connect with their hometown’s growing millennial population. For their generation, wine culture was often considered stuffy or pretentious in comparison to the laid-back, approachable conversation that had developed around craft beer. “We wanted to take away the mystery,” Biber, who was born in Austria, says. “We wanted it to feel like Europe, where it’s not fussy to go out for a glass of wine.” To find interesting bottles to stock behind the bar, the couple often drove up to Sarasota or down to Naples in pursuit of varietals beyond the expected cabernet and chardonnay. About a month after opening, they visited Natural Wine Naples. “At the time, we didn’t know what natural wine was,” Biber says. Owner Peter Rizzo introduced the pair to a few approachable bottles, like Redentore pinot grigio from Italy’s northern Veneto region, which Biber describes as “the most flavorful pinot grigio I’d ever had.” Next, the couple took home a hazy bottle of amber-hued grenache from Donkey and Goat, a pioneer of California’s natural wine movement. “The first time you see that wine, you’re like, ‘What is that? I need to try it!’ You can’t even fathom what the flavor profile might be,” she says. “It tasted like the juiciest kombucha, strawberries and yuzu.”

Intrigued (and with the help of a distributor recommendation from Rizzo), the pair added Redentore to their wine list. As they continued seeking out new wines, they found themselves gravitating toward other unconventional bottles. “We were trying absolutely anything and everything,” Lay says. “A lot of the wine we were falling in love with ended up falling under this umbrella of ‘natural wines.’” Although there is no official definition of natural wine, for Biber and Lay, the category is characterized by wines from small growers that are organically farmed, use wild yeasts to start fermentation and have little to no chemical additives. “One thing we explain to people is wines don’t have to list ingredients [on the label],” he says. “They don’t understand that wine can be just as processed as a bag of Doritos.”

Beyond production methods, the branding and vernacular around natural wines dovetailed with their vision for an approachable, cool-kid wine bar. In trendsetting wine bars in Brooklyn or Los Angeles, tables are dotted with bottles sporting pop art or cartoon labels. Winemakers and bottle shops, adept at social media, post stylized bottle shots with captions that you’d never find in a Robert Parker review. (A recent post on the Palace Pub’s Instagram quoted Northern California winemaker Martha Stoumen, who described her white blend as tasting “like a margarita and a light white wine went on a date and got tamari-glazed dulce de leche for dessert.”)

To pique interest in their new wines, the couple placed bottles of Australian pétillant naturel (a gently fizzy sparkling wine that’s become a hallmark of natural wines) in a cooler behind the bar. Much like the Donkey and Goat grenache that captured their interest at Natural Wine Naples, the hazy, bright pink wine became a conversation starter among customers. “We found people would come with friends and try it as a group. Most liked it, sometimes there’s one who says, ‘This is the weirdest thing I’ve ever had,’” Biber says with a laugh. “One of the things I like about natural wine is it spurs learning. People don’t come to Palace just for drinks; they come to see something new.”

The duo slowly incorporated more natural wines as demand grew, focusing on bottles from small producers in Europe, where sustainable farming and minimal manipulation in the cellar is more common. “In Europe, a lot of small wineries never introduced industrialization the way it exists in California,” Biber says. “Some of those wineries have been making wines for 500, 600-plus years. They weren’t going to change what they were doing because the formula was already right.”

In March 2020, one week before the COVID-19 shutdown, Palace Pub debuted the retail arm of its operation and transitioned its selection to be fully natural. Unlike most wine stores, which are organized by country, Palace Pub organizes its shelves by body—from cloudy, unfiltered whites to tannic orange wines to dark, ruby-colored Italian rosés to rich reds. The layout encourages customers to browse the selection rather than gravitate toward recognizable regions. So does the price point: Bottles mostly range from $25 to $35, and behind the bar, most glasses are less than $10.

Since the transition, Biber and Lay have both passed their level one sommelier exams, and Biber now works as a wine representative for a distributor, having shaped the natural wine-focused lists at Naples’ Narrative Coffee Roasters, Ceremony Brewing in Bonita Springs and Fort Myers’ Remedies Parlor. As Palace Pub continues to grow, bringing in new bottles from the couple’s favorite producers, they hope to see more people, including older generations, embracing natural wine. “The conventional world of wine thinks the natural wine movement is a bunch of millennial hipsters sitting around drinking flawed, imperfect wine. There is a lot of that in New York and L.A., where [natural wine] has really taken off. That’s not how it is here,” Lays says, emphasizing that sustainably produced wines can still portray classic flavor profiles. “Florida is a new frontier for natural wine.”