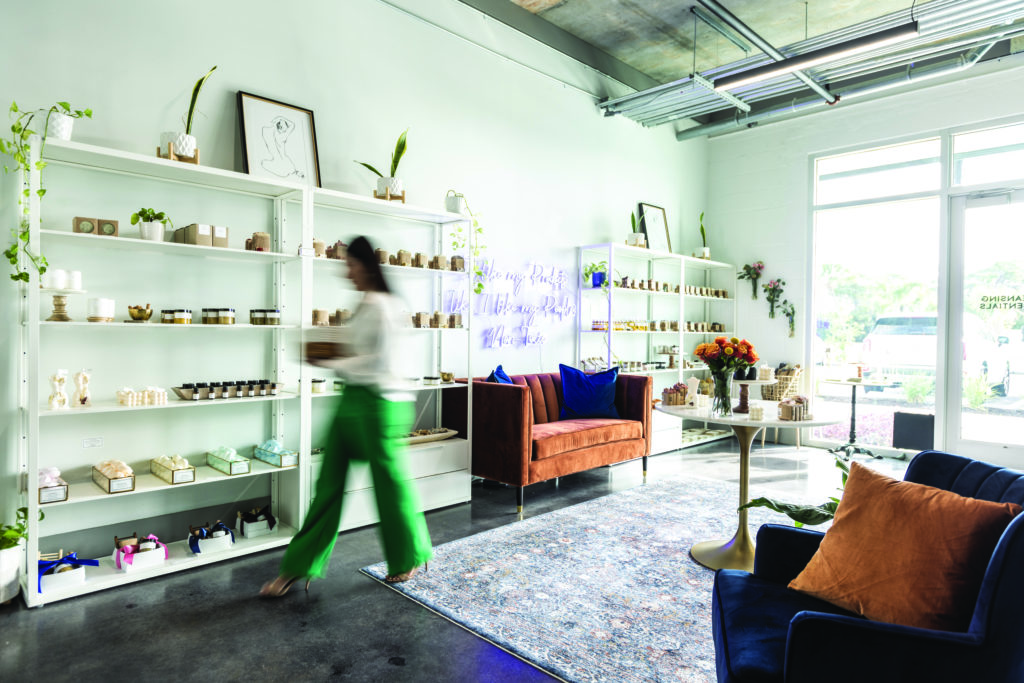 The idea for Cleansing Essentials started four years ago, when owner Ruby Campos started making natural, vegan skincare products to help her son, Nico, who’d been dealing with eczema on his hands since he was a baby. Dermatologists gave her prescriptions for steroids and creams, but the effects were temporary. By the time Nico was 8, Campos had realized her son’s condition wasn’t going away, so she took matters into her own hands. “I wanted to try the natural way, without dermatologists and medications,” she says.

In 2018, she began experimenting with coconut oil and raw shea butter, looking for the right blend to temper Nico’s eczema. Many of the products she found in stores were laden with parabens, which can cause reactions in people with skin sensitivities. When she added castor oil, she hit on the right combination and developed a body butter that healed Nico’s hands. Wanting to transition her son to an all-natural cleansing routine, Campos started crafting natural soaps. Like the body butter, the soaps contain minimal ingredients, including organic coconut oil, shea butter, castor oil, extra virgin olive oil and lye. Soon, Nico’s eczema disappeared.

Nico is now 14 years old, and his dry, itchy skin symptoms have mostly stayed away. The rashes tend to reappear during the dry season or if he stops using his mom’s soaps and salves. “He’s a teenager,” she says, with a laugh, noting that sticking to a routine isn’t always in the cards. But once he starts using the products again, the eczema vanishes.

Before she started Cleansing Essentials, Campos, who has a degree in healthcare administration, was working full time at a hospital. She started giving her soaps and body butters as gifts, and soon, colleagues were asking to buy the all-natural, beautifully packaged goods.

When her business became more than a side hustle, she launched an online store in 2019. Working out of her garage, Campos tinkered with recipes, coming up with formulations like lemongrass soap and lavender butter. She opened her brick-and-mortar boutique in Bonita Springs’s new Entrada plaza last fall (the same plaza as The Bohemian).

The brand has since expanded with dozens of products, including lip balm, face oils and masks, body polishes and candles. Sustainable sourcing is a key part of her business. “As a business owner, you have that responsibility,” she says. She orders her palo santo oil from a producer in Ecuador that uses fallen branches instead of cutting down trees. It’s one small way Campos feels she can help fight deforestation. “If we stop, think and try a little harder, we can all make a difference without changing our lives completely,” she says.

Thinking about the health of the oceans that surround us in Florida, she uses minimal plastic for her packaging, and all proceeds from her Clean Sea Soap go to The Ocean Cleanup, a nonprofit that removes plastic from the oceans. “I love the beach,” Campos says. “It’s my little piece that I can do to contribute to that.”

The 35-year-old now spends her days going between the boutique and her 500-square-foot warehouse workspace down the road.

Since opening the store, she’s seen repeat customers rave about how the products help with their skin problems. “I’ve seen what these products have done for my son,” Campos says. “If I can help other people who have skin issues and make them feel better, that’s what I want.”