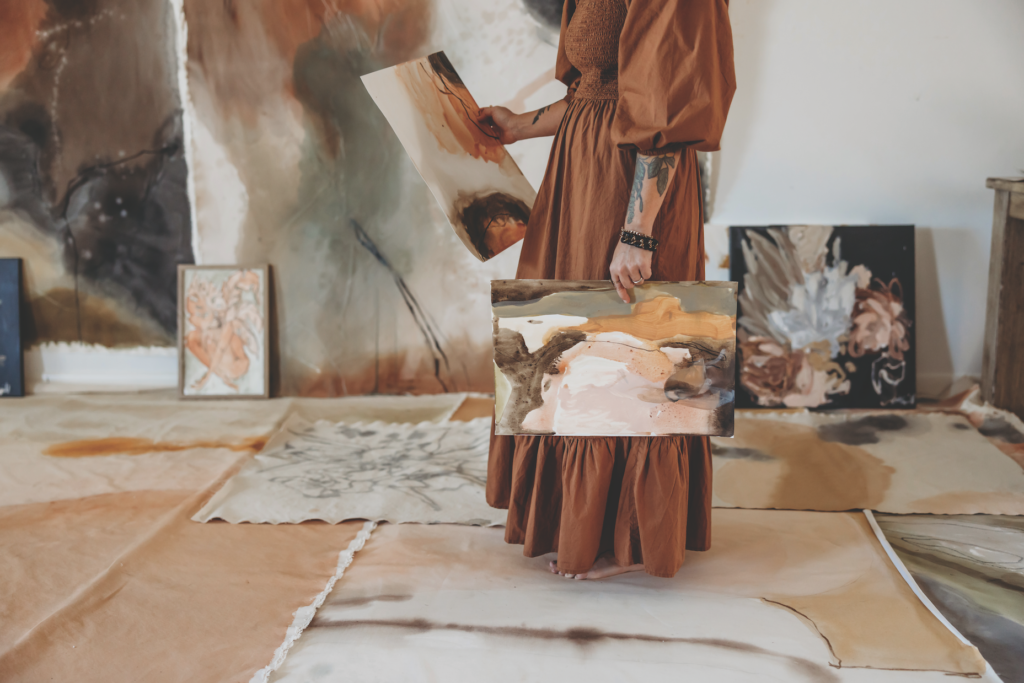 “I like when there is a little rawness,” the artist says about her nature-inspired works. (Photo by Kelly Jones)

Plants, nature and landscape have long influenced the work of Kristy Gammill. Her early figurative paintings, usually done on stretched canvas, often showed explosive compositions of the tropical foliage found locally—monstera, bird-of-paradise flowers, elephant-ear leaves. But, a trip to the High Desert of the Mojave, around Joshua Tree, California, presented a fresh catalyst for the artist.

Gammill travels widely, sometimes with her children and her pilot husband, and sometimes with a childhood friend who is now an art critic. Seeing different kinds of art worldwide has been essential to her creative growth. As she studies the work of other artists and the topics and ideas they’re exploring, she asks herself, “What do I want to have a conversation with?”

On that 2019 trip to California, she visited the Frieze Los Angeles art fair and the Desert X biennial in the Coachella Valley. Cruising through the arid Californian desert, the colors of the landscape started to bring about ideas to propel her art.

Color has always been a focal point for the accomplished artist, who’s best known for her floral paintings. She has had partnerships with brands like One Kings Lane and Hallmark and is a go-to for local interior designers. “Colors convey feeling; they can cause emotional responses in people,” she says. The series that Kristy Gammill began soon after her California trip signals an exciting gear change for her work. These new abstract paintings, bigger and more formally experimental than anything that preceded them, win her deserved attention. Harking back to the bold, expressive work of mid-century female painters such as Helen Frankenthaler, Joan Mitchell and Lee Krasner, Gammill has developed her own visual language that is entirely of the moment.

Informally, she refers to this series as her “soak-stain paintings.” She works on unstretched, unprimed canvas laid flat on the ground, using watered-down acrylics that seep and spread through the fabric. After painting, she often draws on the works with charcoal, adding outlines that resemble cracks or faults. Whether seen close up or from high overhead, the paintings evoke images of the desert floor, with muted shades of cream, brown, soft pink, and green-gray. This toggle between the micro and the macro, between evocations of granular detail and distant satellite imagery, lends the paintings an indeterminate scale. “The colors are more of a mood than anything else,” she says. “The overall collection of works, between the florals and abstracts and everything else, it’s more of a feeling that I’m trying to get through. The abstract form leaves it open to interpretation for the viewer.”

These large abstract paintings often begin as details, blown up from her much smaller works of flowers and plants. Sometimes, she combines these plants with female figures, usually done as self-portraits or depictions of her daughter.

When she moved to Florida from her native Oklahoma in 2017, Kristy Gammill was astonished by the plants she found, especially at Naples Botanical Garden. “In Oklahoma, everything dies,” she laughs. In Naples, orchids take root on trunks of trees. The aesthetic of the natural world informs her paintings’ textures, too—as with their crumpled canvas and softly fraying edges. “I like that slightly disheveled quality,” Gammill says. “I like when there’s a little bit of rawness.” While collectors often choose to have her canvases stretched, she also likes to display them hanging loosely from wooden bars, like tapestries.

As a busy mother and prolific creator, it would be understandable if the energetic pace of her daily life inflected her art. “In my other work, I’ve always been so vigorous in the brushstrokes,” she acknowledges. “Right now, I’m just like, ‘OK, slow down … Stand back, and chill out.’” For Gammill, the slowness of the landscape—whether the Western desert or her subtropical Gulf setting—points to a way to live and a way to paint.