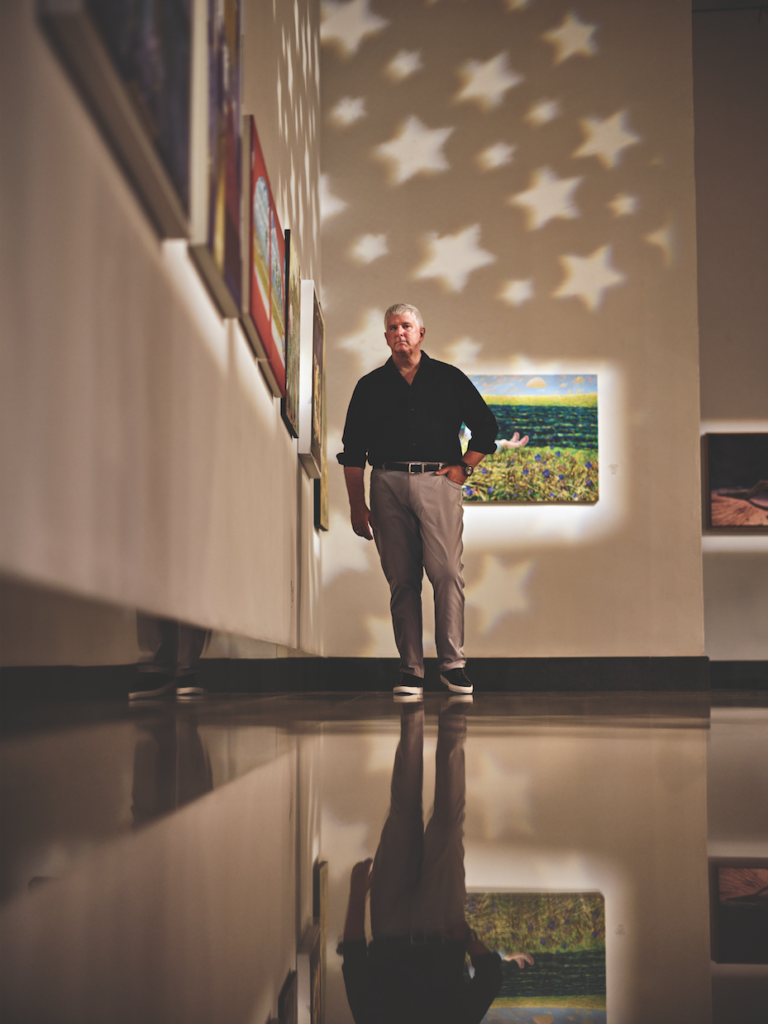 Griffith’s nearly-20-year vision for a rooftop space at SBDAC came to fruition last year with Sidney’s Rooftop Sculpture Garden. He was also behind the creation of Art Walk and Music Walk—catalysts for downtown’s renaissance. (Photo by Dan Cutrona)

On a recent Friday, Jim Griffith, the president and CEO of the Sidney & Berne Davis Art Center (SBDAC), works on his laptop in a conference room on the main floor of the three-story building, seated at a large glass table with a base that local metal artist Lawrence Voytek reconstructed out of gears from the building’s original elevator. In season, when he’s not clocking in at his other post as a violist for the Naples Philharmonic, he spends about 50 to 60 hours a week at SBDAC. Located in the heart of downtown Fort Myers, the 1933-built, 30,000-square-foot gem originally served as a United States Post Office before it became a courthouse and was abandoned in ’98. “There are so many pieces of history here,” Griffith says, looking around the room. “I couldn’t let anything salvageable end up in a landfill.”

His curiosity and can-do attitude date back to middle school in Sarasota. In an orchestra class, he was handed the viola to play after he admitted to the teacher that he didn’t even know the names of the instruments; that fortuitous moment spurred his lifelong career as a violist. He went on to study music at Florida State University, where he met his wife, Kara, a violinist. The couple split briefly in the ’80s when he transferred to the Manhattan School of Music and was then accepted into The Juilliard School. The budding musician received many offers to perform with orchestras in Florida, and he often invited Kara to join him. “Juilliard had an open policy to let students off school to get real-world experience,” he says. After they both graduated, Kara, who he remained in touch with, landed a gig as a violin teacher in Fort Myers around the same time Griffith’s lease in New York ended. Looking for a bigger-city vibe, he moved to Tampa, and for a year, the couple traveled to see each other and perform together, dubbing themselves the “I-75 Orchestra.” He joined Kara in Fort Myers in 1989, the same year they both started with the Naples Philharmonic.

Eager to grow the arts scene, Griffith connected with Patty Gair, a dance teacher at the head of the city’s Arts & Cultural Affairs department. In the ’90s, they ran the New Arts Festival, bringing chamber music, modern dance and theater to the historic Arcade Theatre. Eventually, Gair moved on, and Florida Repertory Theatre took over the Arcade for year-round programming, leaving Griffith in need of a new home to grow his arts outreach. “I walked by the old post office regularly,” he says. “In the ’60s, it was used as a courthouse, and they covered the original marble walls with paneling, covered the beautiful floors with carpet and linoleum, and dropped the high ceilings. When a new courthouse was built in the ’90s, the building sat decaying and empty—I would peek in the windows and see huge puddles of water from leaks.”

To Griffith, the building “had art center written all over it.” Two vital people shared his vision: Former Fort Myers Mayor Jim Humphrey, who recognized the transformative power of the arts, and philanthropist Berne Davis, who, with her late husband, Sidney, had owned a bustling menswear store downtown in the neighborhood’s heyday. “You have to remember there was nothing downtown except a blighted neighborhood and crime back then,” Griffith says. He acquired the building in 2003 when he signed a 99-year lease with the city to take over the historic structure for $1 annually (this included a promise to renovate and open it to the public within four years). In 2007, with the deadline to open looming, Davis pledged the $1 million naming gift that led to the Sidney & Berne Davis Art Center we know today. In the past year, Griffith and his team have proven the center’s community impact with the debut of the much-anticipated rooftop space and a slate of inclusive programming.

On a Friday afternoon, as he prepares for the monthly Art Walk—an event he co-founded with a handful of fellow art lovers in 2008—Griffith walks me through the building. In The Grand Atrium gallery on the first floor, an exhibit by two Cuban artists speaks to the center’s propensity for collaborations. Upstairs, a Los Angeles songwriter works on his new album in Six Fingers recording studio—a revenue incubator for the nonprofit and a resource for local talent. Griffith aims to have something going on every day of the year, whether that’s the Fort Myers Film Festival (which calls SBDAC home), dance performances, yoga classes or rooftop parties at Sidney’s Rooftop Sculpture Garden. Opened last year, the rooftop has been in Griffith’s mind since the beginning and was officially kickstarted in 2007. Complications and costs mounted, pushing the project for nearly 15 years until he raised the $2 million needed. Now, he’s adding a lower deck with additional sculptures that visitors can view from the rooftop and second-floor windows.

Standing on the rooftop, Griffith looks onto the now-bustling First Street: “I became so obsessed and passionate about making this a success—and failure was not an option.”