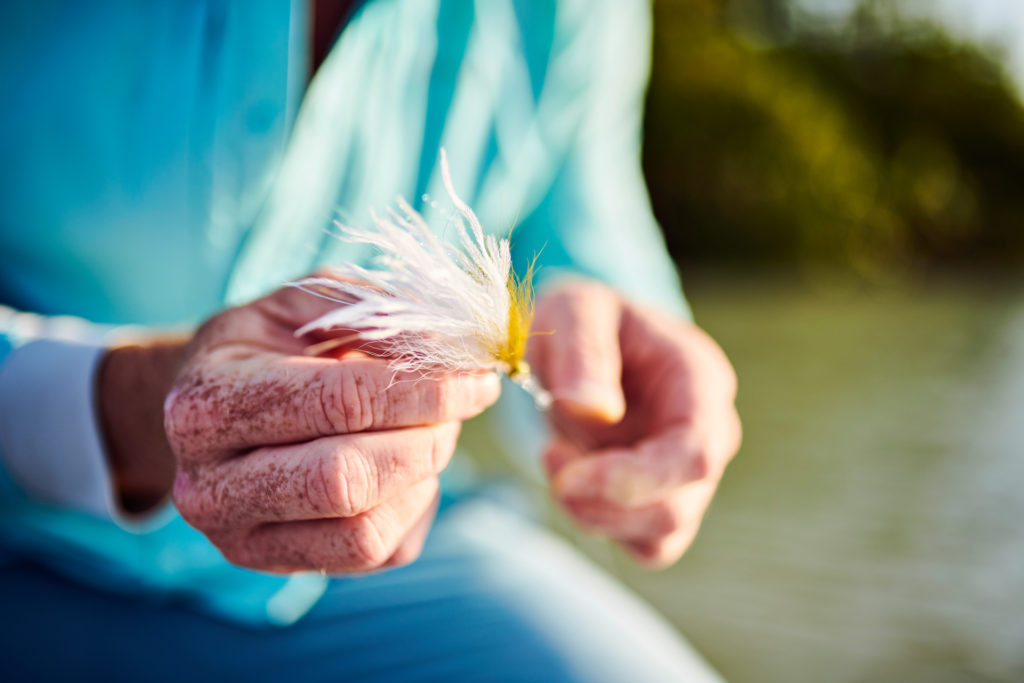 What started as a hobby tying flies for firefighter Nick Davis, became a booming business with several friends and family, including his brother, Jim Davis. (Photo by Dan Cutrona)

Nick Davis never planned to be here, steering the metaphorical ship of a thriving fly-fishing business. The Naples native and his business partner turned a cottage fly-tying business, run out of a spare bedroom, into a booming fly shop in Bonita Springs. “It’s not where we work; it’s what we do,” Davis says about his shop that focuses exclusively on fly-fishing.

Since opening four years ago, 239 Flies has tripled its floor space and recently added a second location, 828 Flies, in the North Carolina mountains. Davis is “Instagram famous,” thanks to his fly-tying prowess, and hosts a popular tying workshop out of his local shop. Not bad for a guy who works full time as a firefighter and only started tying flies as a hobby to fill his downtime at the station. “I’d stay up late and tie flies, so I had new stuff to cast on my days off,” he says.

That was back in 2012, and after a few weeks, his best friend and soon-to-be business partner, James Ross, convinced Davis to start selling them online. “I thought he was nuts. I told him nobody would buy my flies on the internet,” Davis says. “Man, I was wrong.”

Thanks to a savvy social media presence and his infectious passion for the sport, Davis’ fake bugs took off, and soon, he couldn’t keep up with the demand for his sought-after handcrafted ties. “It’s not that I was doing anything differently,” Davis says. “It’s that I invited people to share it with me. Fly-fishing has been an exclusive club. From the very beginning, I sought to be inclusive.”

It worked. Davis and Ross opened a small brick-and-mortar at the beginning of 2018. Two years later, they renovated and moved into a 2,600-square-foot shop off Bonita Beach Road. And when an opportunity to expand their business into another state presented itself, they jumped on it. Well, Ross jumped on it. Davis dragged his feet. “I fought James every step of the way, from starting an internet business to opening this new shop,” he says. “I had a panic attack the night before we opened our first shop. It hit me that I just financed a store that specializes in doll hair, because that’s basically what synthetic flies are: really fancy doll hair.”

You wouldn’t call Davis’ success accidental, but serendipitous? That fits. Consider the timing of 239 Flies’ expansion at the height of the pandemic when seemingly everyone decided to pick up the sport. “There are two events in modern history that resulted in an explosion in fly-fishing: When the movie A River Runs Through It came out and COVID.” Davis says. “Everyone wanted to learn how to fly-fish, and COVID was the perfect excuse to buy a rod and finally do it.”

Davis discovered fly-fishing as a teenager. He grew up spin casting, like a lot of people in the area. When he was 16, he read an article about casting for bonefish with a fly in Biscayne Bay and was immediately drawn to the sport. He walked into True Value, bought a rod and reel, and the salesman showed him how to use it. “Fly-fishing is so much closer to hunting than fishing. That’s why people get addicted to the process,” Davis says. “In fly-fishing, you’ll push down a bank and see a 100-pound tarpon, then throw a Tic Tac at it and watch this explosion of action, like a National Geographic level of nature, right in front of you. You get to interact with wild ass animals at their nuttiest. It’s just cool. As soon as you do it, you want to do it again.”

And, he says, these new fly-fishing addicts have a world of water to explore here. “You can hop in a guide’s boat and hunt for 100-pound tarpon, or stand on a beach and spend an afternoon sight fishing for snook right in the surf. And that’s just right here. Fly-fishing gives you a whole new reason to travel and interact with the world.”

Not that Davis has much time to fish himself these days. He’s 15 years into his firefighter career and has no immediate plans to retire, and overseeing 239 Flies and 828 Flies occupies most of his free time. He only gets a couple of days on the water a month. Not that he’s complaining. Davis considers himself lucky, not because his business is thriving, but because he gets to work with his best friend. He also hired his older brother to run the 239 Flies shop; his 15-year-old daughter helps with the store’s social media posts and one-off projects, like tie-dying 239 Flies T-shirts; and a longtime fan—a fellow fly-fisher he met on Naples Bay who was among the first to get one of his commercially made flies—serves as “the shop mom,” helping with merchandising and designing displays. “This is about so much more than business to me,” Davis says. “There’s not a night I go to sleep where I don’t feel like the luckiest guy on the planet. I do what I love, with the people I love.”