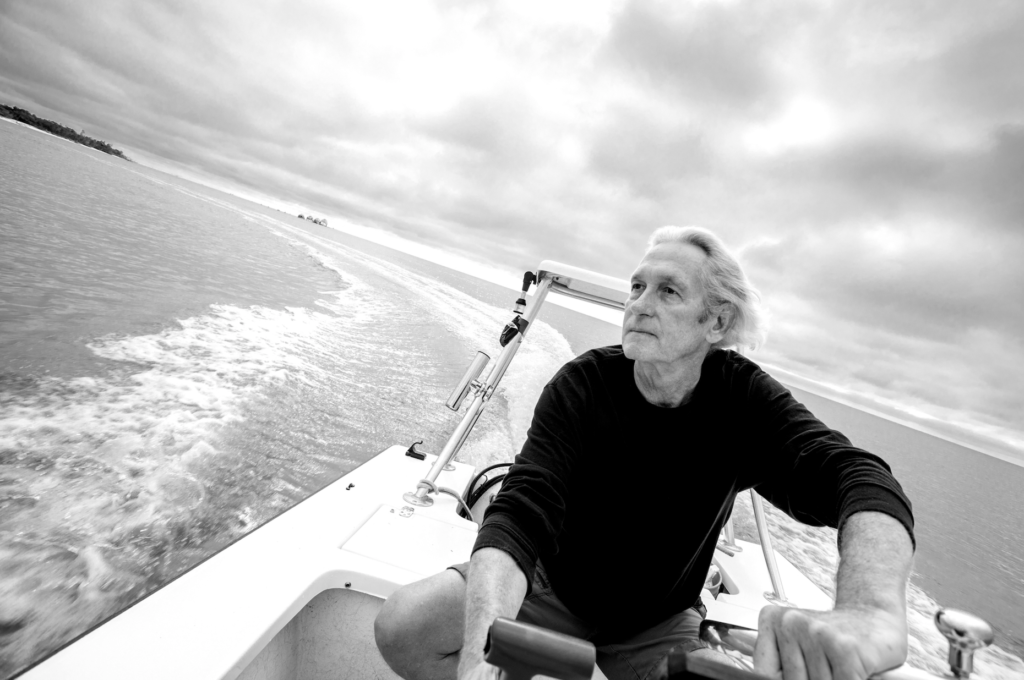 The water around the Ten Thousand Islands National Wildlife Refuge is temperamental: Sometimes, it runs calm and clear; other times, the wind stirs the silty bottom and agitates the surface. Naples’ Andy Owen knows these shifts well. He’s frequently out there “chasing horizons” off the shores of the Everglades, hitting the waterways by dawn, circumnavigating mangroves and mooring on pinprick-size keys, in his small skiff, Gator.

Owen is neither a marine biologist nor a fishing guide; he’s an artist. His family moved to Naples when he was a kid in the late ’60s. Soon after, he started exploring the islands on camping and fishing trips with his dad. Even today, “new discoveries take place on every trip,” he says.

Owen left the area after graduation, going to the University of Florida, then to the University of Arizona for his Masters of Fine Arts, and eventually settling in North Carolina. He’s taught printmaking and exhibited his works—ranging from glass engravings to collagraph printing—across the United States, Europe and Asia. Inspired by the abstract expressionist painters of the mid-20th century, his fluid, spontaneous marks course across paper and glass. “My work has always aimed to capture the dynamics of nature,” he says.

About 25 years ago, he returned home to be closer to his aging parents. The subtropical setting was also a draw for him and his Thai wife, who missed the heat and had grown weary of living in the North Carolina mountains. “We decided to come back home and plant some trees,” he says. Andy Owen taught in the local public school system for about a decade before landing a job teaching art at Florida Gulf Coast University (FGCU). From the beginning, he set out to establish the school’s printmaking department, with a focus on nontoxic methods, including using water- and plant-based inks. He aims to empower the next generation with cleaner practices, devoid of harmful chemicals and fumes. “We have to consider sustainability not just from an environmental standpoint, but also our human resources and the sustainability of an artist’s health,” says Owen who witnessed mentors become ill with cancer and other conditions.

In 2017, FGCU awarded Andy Owen a semester-long sabbatical, allowing the artist time to teach himself solarplate printmaking, a safer process that utilizes UV light to create etchings and relief prints. When Hurricane Irma hit, Owen unexpectedly found himself depicting the aftermath of a colossal natural event. “Once I knew that my house was still standing and folks I cared about were OK, I became fascinated with observing nature’s power and fragility,” he says.

Printmaking is where all the crossroads meet, Owen explains. Every print begins with an image, whether it be drawn on stone for a lithograph or engraved for a woodcut print. With his post-Irma images, he either burned the photos—which he first edited in Photoshop—onto the coated steel plates or utilized the photographs as references to draw the images he would later print. The resulting artworks, which he calls “narrative landscapes,” depict windswept mangroves, once crowned with leaves, standing skeletal as they protrude from the shallows; white sands crisscrossed with driftwood; and expanses of empty sky. “There are areas where the foliage is coming back. Then, there are areas, like those in the images, where that is never going to grow back,” he says, reflecting on the lush islands, free of debris, that he saw as a kid when he’d go out with his dad. “That’s a big change from when I was a child.”

Solarplate printing—with its highly contrasted, staticky quality—turned out to be a fitting medium for depicting the battered scene. Despite the still atmosphere, the branches look like lightning rods crackling with energy, resulting in images that are both pensive and slightly dystopian.

Andy Owen recently shifted to woodcuts, one of the oldest forms of printmaking in which images are carved onto wooden blocks, then inked and pressed onto paper. He likes to enlist the earthier method to depict the aqueous elements around him. “I was curious if I could capture a feeling of fluidity in such a rigid medium,” he adds. He does just that with pieces like Solace (2022), in which he carved gently curving waves into a still expanse of water.

Often, his woodcuts reveal the activist undertones in his work. Where his solarplates focus on the landscape, the woodcuts mostly depict dead fish—a reminder of red tide and its impact on local wildlife. “Woodcut has a history of sociopolitical commentary,” Owen says, noting that the prints have been widely used throughout history to make protest signs and political posters. “I felt the medium was appropriate for bringing environmental issues to light.”

Whether the messages are overt or implied, all of his works stand as ambassadors for the Ten Thousand Islands and Southwest Florida’s waterways, reminding viewers of the beauty and majesty of the natural world. In another solarplate series created right after Irma, Owen focuses on the mile markers that guide vessels like Gator through the water. In these prints—his only works that include manmade elements amidst a natural environment—the viewer looks from an area of darkness out into an expanse of light, where the signs stand like unwavering sentinels. The cross-like symbolism hints at the potential for redemption, for finding our way as we work to preserve our wild spaces. “My work is motivated by the idea that the natural environment is a complex and meaningful balance of the sublime that is essential to our well-being, rather than a commodity to be parsed, exhausted and profited from,” he says. The markers, he notes, are helpful as we think about where we may go. “Being lost at sea is a terrible feeling, and finding a marker is very helpful,” he says. “The vertical line of the marker intersecting the horizon is significant and offers hopeful possibilities.”