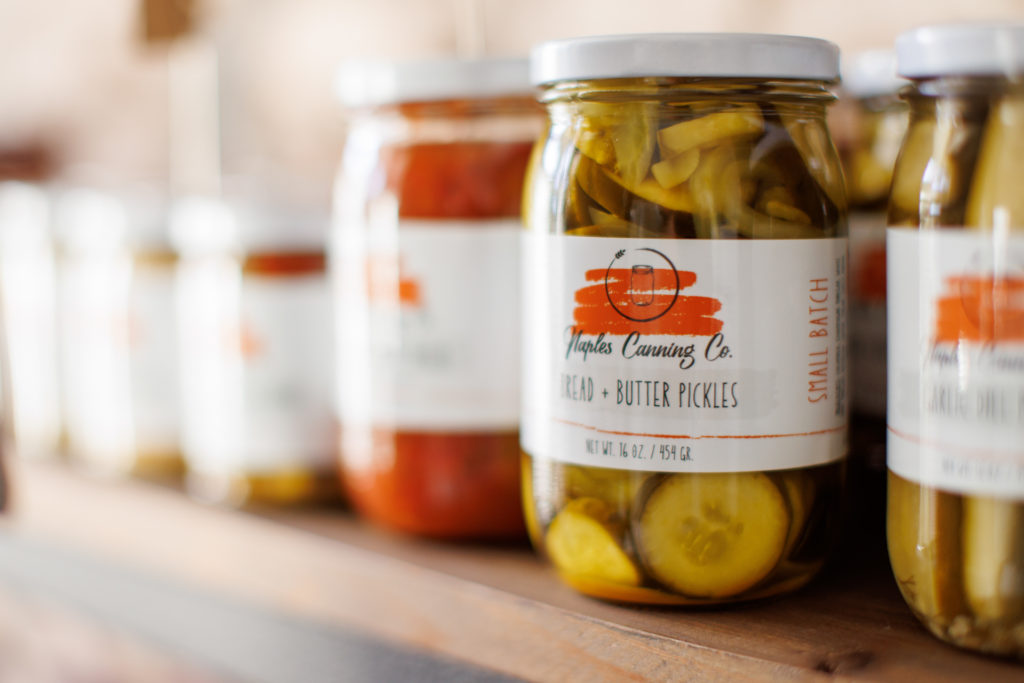 A former chef, David develops recipes with specialty ingredients, like the Champagne vinegar that goes into his bread-and-butter pickles. (Photo By Brian Tietz)

David McCone is a young man working to perfect an old tradition. The 34-year-old created Naples Canning Co. three years ago, inspired by Southwest Florida’s bounty and a desire to capture its just-off-the-vine flavors. He is—for now—a one-man operation that partners with local organic farmers, transforms their produce into various jarred and pickled foods, and sells them on his website, at Naples’ Third Street South Farmer’s Market and at his five-month-old retail shop, The Farm Stand at Naples Canning Co. in Bonita Springs.

He offers a peek at his process one April morning when I visit his commercial kitchen in North Naples, where he develops recipes, produces his goods and stores his inventory—pickles, heirloom tomato sauce, salsa, jams. The preservative-free canned products keep for two years. “It’s the same as we’ve been doing for hundreds and hundreds of years,” he says. In front of him is an oversized bowl filled with late-season Kirby cucumbers, ready for pickling, and a 10-pound block of aged Vermont cheddar—the foundation for his pimento cheese, a product he developed about a year into his venture and which now accounts for a third of his sales.

Naples Canning Co. may be grounded in tradition, but David’s approach to canning is more gourmet than grandma’s, more high-end than homespun. He did, after all, serve as a chef in some of Naples’ finest establishments, where he refined his techniques and discovered specialty ingredients, like imported vinegars and the 15-or-so varieties of heirloom tomatoes that go into his salsa.

David’s journey into the culinary world was winding. He’s a Michigander whose parents worked in the automobile industry and often whipped up Hamburger Helper-assisted dinners for their three boys. He glimpsed alternative culinary traditions watching celebrity chefs Ina Garten, Martha Stewart and Jacques Pépin. Those shows planted the seed—though it didn’t sprout right away. David studied marketing and finance at Grand Valley State University. After graduation, he followed a friend into a financial advising firm but kept his summer gig at a mom-and-pop restaurant. “I kept finding myself really connected to the kitchen,” he says. The restaurant’s owner agreed to let him move from serving to cooking, encouraging his self-study of the trade.

About a year into his financial planning job, David quit. The work simply didn’t resonate. He hurled himself into the culinary arts and joined his brother in Naples in 2013, intending to spend the next few years hopping from city to city, working his way up the kitchen ranks. He found a position—and a future bride—at Café Lurcat and didn’t look back. “I didn’t have any interest in moving anymore,” he says.

Instead, he advanced through Naples’ dining scene, joining the founding staff of The Continental and then serving as executive sous chef at The Bay House. The Midwesterner gravitated toward Southern cuisine for its simplicity and emphasis on fresh, seasonal fare. David also bonded with area farmers who supplied the restaurants, developed a deep appreciation for their organic produce and started ruminating on how to best capture, preserve and present it during summer when almost nothing grows here. “As a chef, I was always thinking about that: How do we use seasonal produce year-round?” he says.

He discovered a strange truth about the region’s agricultural industry along the way: “Southwest Florida is one of the largest agricultural food hubs in the world, but a lot of the food leaves here,” he says. Crops are shipped across the nation, residents don’t connect with locally grown products, and even today, in an era when many praise farm-to-table cooking, few restaurants partner with area farmers, he explains.

David left the kitchen to pursue specialty food sales and carve out more time for family. But he never stopped thinking about local produce, how to capture its peak flavors and how to introduce it to the community. Such concerns—and a need to earn extra money for his wedding—led to the creation of Naples Canning Co.

He started with pickles. “They’re the little secret chefs use to elevate a dish,” he says about the crunchy, salty kitchen staples. He developed a bread-and-butter variety, that became a hit among the farmers market crowd. Older customers say his blend reminds them of childhood. “I think mine are more traditional, more old-school,” David says. He uses about half the customary sugar, favoring Champagne vinegar and Florida-grown sweet onions instead. He later branched out to dill and, more recently, introduced a bloody mary pickle that mimics the zesty cocktail with horseradish, black pepper and tomato powder. “It’s a great snacking pickle,” he says.

David works with fruits, too, eschewing commercial pectin (a thickening agent) and instead reducing vast quantities of berries into super-concentrated spreads. His lemon-blueberry blend is popular; the strawberry-rose is sentimental—when his Ukrainian wife was a child, her grandmother made a similar version from the blooms in her garden.

He’s working to earn national recognition. Last year, he entered his pickled cucumbers, jicama and peppers into San Francisco’s Good Food Foundation’s Good Food Awards. The peppers—a blend of jalapeños, Fresnos, shallots and apple cider vinegar (“a little heat, a little sweet”) made it into the competition’s top five. He’ll tweak the recipe and re-enter this year, hoping to earn a spot among the top three and the national exposure awarded to those finalists.

The recipes matter, but the key ingredient is the produce. David partners with two organic farms, Inyoni Organic Farm in Naples and 12 Seasons Farm in Fort Myers. The owners grow vegetables to specification (small cucumbers, for example, yield the best pickle flavor and texture), and David processes the foods within a day of harvest.

David’s farm partners value that he doesn’t cut corners. At the commercial kitchen, he hand-grates the 10-pound block of cheddar for the pimento cheese, which is rustic with course strands of cheddar and chunks of peppers.

Later in the day, he’ll tend to his new storefront in Bonita Springs, where he features his products and those of other independent artisans and small producers—his way of helping promote others with similar passions and shared journeys. That, he says, is what sets his work apart. “When a farmer picks something with their hands and presents it to you straight from the farm, there’s a world of difference. There needs to be more awareness of that. I’m not just trying to produce products to sell. I’m trying to sell you 12 Seasons Farms. I’m trying to present Inyoni Farm cucumbers,” he says. “I’m trying to preserve their peak-season flavors.”