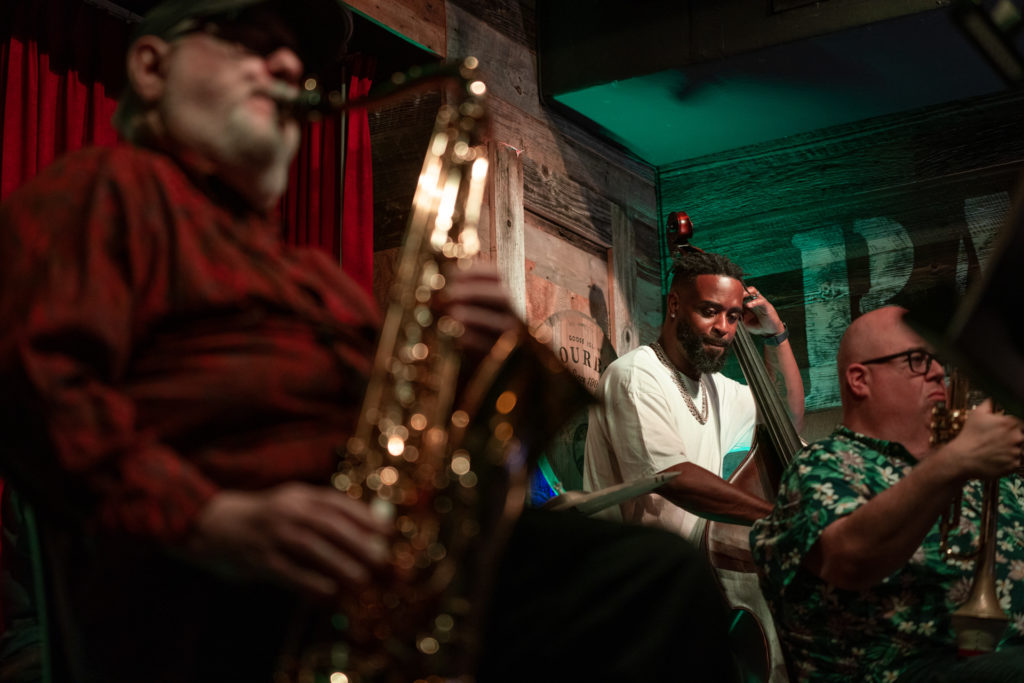 Brandon is creating a full-fledged jazz studies program at Florida Gulf Coast University, with the help of an endowment started by philanthropist Dorothy Guigon. He aims to turn FGCU’s Bower School of Music & the Arts into a top institution for aspiring jazz musicians. (Photo by Chris Lake)

Spoiler alert: Jazz is a metaphor. Plenty of writers have waxed poetic about improvisation:  Embrace the unexpected; adapt in the now; roll with whatever comes next. Jazz can also be a paragon of versatility. The greats, for example, must master the rules, principles and fundamentals but also break past them to carve out novel creations. All this could be said of Brandon Robertson’s music career. It could also be said—as Brandon does—that jazz saved his life.

His music career started with a double bass on loan from his elementary school. Brandon was 10 years old when he started dragging the hulking instrument to and from school in Tampa in the mid-’90s. It wasn’t until he was much older that he realized to what extent it protected him—a tortoise-like shell over his tiny frame traversing one of the city’s most under-resourced neighborhoods.  “I had this large instrument covering me,” Brandon says. “All the way through college, no one messed with me.”

At 36, the lifelong Floridian is now spearheading a new jazz studies program at Florida Gulf Coast University’s (FGCU) Bower School of Music & the Arts. He also directs the school’s basketball band, fronts his own jazz quartet, performs with the lauded Dan Miller Collective and maintains a laundry list of other side projects and programs. You may know him from the Brandon Robertson Soul Hour podcast (which returns this month with guest Neal Caine, a bassist for Harry Connick Jr.) or the 2018 Suncoast Emmy nomination he snagged for a documentary featuring the FGCU Jazz Ensemble.

Like any good success story, his road to these destinations was riddled with unexpected turns, including his arrival at Florida State University (FSU) in Tallahassee as a clueless freshman in 2004. He recalls his mom’s boyfriend dropping him off alone on campus, straight out of subsidized housing, with $100 to his name and a full-ride scholarship to study music. “Welcome to life,” is how Brandon describes it.

His mother, Faith Michelle Stephens, was an accomplished gospel singer until a drunk driver plowed into her car one night in 1994, temporarily paralyzing her and bringing her career to a screeching halt. Brandon’s grandmother sent him to an afterschool program that reintroduced him to music. The moment he touched a bass, it was clear he had inherited some of his mother’s skills.

He credits three constant forces for propelling and guiding him: his wife, (who he met while studying at FSU), relentless gigging and supportive mentors. The latter inspired him to focus his professional energy on the next generation of jazz musicians. He tells his students: “Be a good person first,” citing early mentor Bob Dogan, a Tallahassee jazz pianist who passed two years ago. “If I’m a good human being first, everything else will work itself out.”

Brandon has a mental quiver full of these maxims, reclaimed from films, life experiences and mentors. He routinely hurls them at his students, just like Bob did to him, while imparting jazz knowledge. His innovative take on the genre incorporates pop, R&B, hip-hop and culture-at-large. In the classroom, he may pivot on a dime from Miles Davis to Pulitzer Prize-winning rapper Kendrick Lamar. “Jazz should not sound like it did when it first came out,” Brandon says. “It should always be progressing.”

Another of his core principles relies on turning one person’s trash into his own treasures, or “blossoming it,” as he puts it. “It’s like Nicholas Cage said in National Treasure—one of the worst movies ever. ‘It took Thomas Edison 2,000 ways to figure out how to not make a light bulb,’” Brandon says. (You see what he did there, with a trash movie?)

He recognizes that failure is vital to the process. For him, this meant saying yes to every opportunity early on, especially the gigs no one wanted. That willingness once got him into a room playing for Dan Marino, where the retired Dolphins quarterback handed him a $500 tip. And it landed him touring jobs with the Zach Bartholomew Trio and the Count Basie Orchestra. Often, though, it meant failing, or flailing, with a commitment to learn and open as many doors as possible.

That explains why, after earning his master’s of music in jazz performance at FSU, Brandon pursued a part-time teaching job at FGCU in 2016—despite the school not having a jazz program. He needed to relocate to Southwest Florida with his wife and child to be near family, so he talked the faculty into letting him teach one jazz class and lead the student jazz club while dreaming up something bigger.

The jazz club promptly evolved into a performing ensemble, which earned a 2018 Emmy nomination and significant respect and attention from the broader community. Three years later, Brandon was in conversation with Dorothy Guigon, a Fort Myers resident, philanthropist and supporter of the Bower School of Music. Dorothy recently made the first donation toward an endowment for a full-fledged jazz studies program at FGCU.

Off-campus, he’s still gigging. He often plays at The London Club in Naples. But his weekly sessions at The Barrel Room in Fort Myers are where he lets loose and plays the music that comes straight from his soul. That’s where you see Brandon, the artist, the musician, the performer. He’s also preparing to release the follow-up to his 2019 album Bass’d on a True Story. Where that debut collection of songs paid homage to his roots and coming-of-age in traditional jazz, his new work, The Pursuit, out next month, represents evolution. “That first album was therapeutic for me,” he says. “This next project is going to be the arrival.”

Listeners can still expect his traditional roots, but with elements of pop music and social issues layered in tracks like “A Song for Breonna Taylor.” The end goal is to give his audience a feeling of rest and freedom. “I like my music to create a space of clarity,” he says.

In other words, he offers a slice of what jazz has always provided for him.