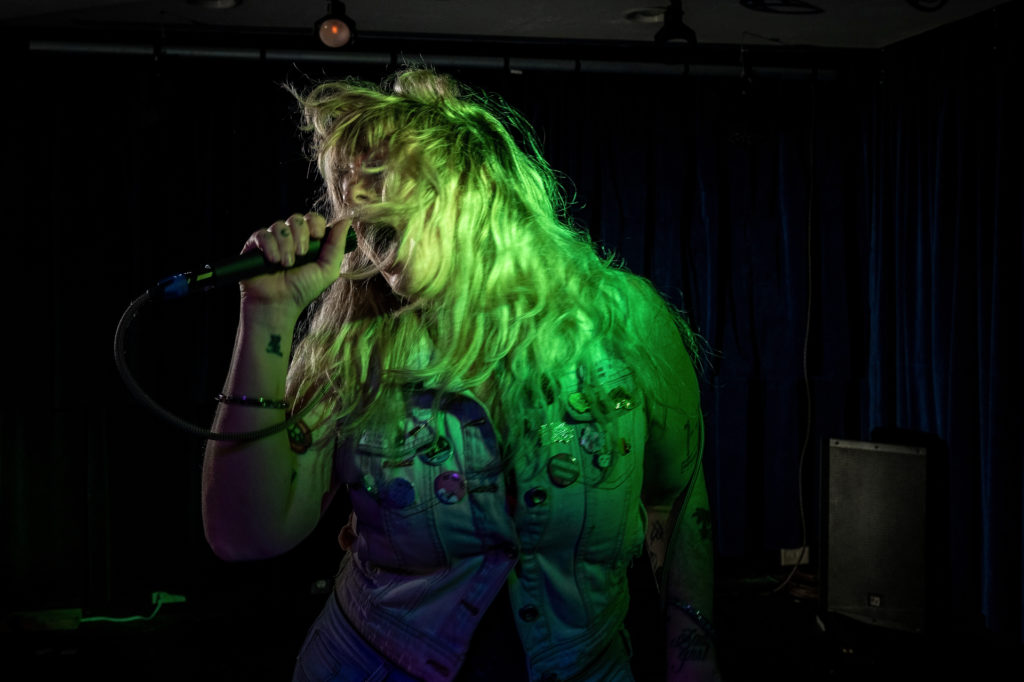 Through Love Your Rebellion, Angela hosts fundraising events for like-minded nonprofits and publishes a zine with art, poetry, journaling prompts and bold graphics that reflect on topics like gender identity and mental health. (Photo by Anna Nguyen)

When Cape Coral’s Angela Page takes the stage with her punk-rock band, Except You, she commands attention. Dressed in ripped fishnet tights, cut-off jean shorts and combat boots, she holds the microphone upside down, her head tilted to the ceiling, grasping the mic cord with her other hand as she belts out the lyrics. “Singing is a part of the long legacy of my affinity for music and performance—all those things wrapped together,” the theater major-turned-lead singer says. “There is something theatrical about the way I perform.” Off stage, she writes poems, scouts local bars for emerging musicians and runs a nonprofit, Love Your Rebellion (LYR), which advocates for marginalized groups through arts events and a namesake zine (or self-published magazine). The tatted 30-something has rallied a group of LGBTQ advocates, BIPOC young professionals and badass women around her cause. “A lot of nonprofit boards have a dollar amount attached to them,” she says. “We don’t want your money. We want your time, your brain power, your collaborations—who can you bring into our grassroots movement?”

The Fort Lauderdale native, who holds a master’s in creative and critical writing (she quickly switched from theater to writing while in undergrad), was teaching at Edison State College (now Florida SouthWestern State College) when she published her first issue of Love Your Rebellion in 2011. That set the stage for her ’90s-style, punk-infused organization, inspired by female rock icons like Bikini Kill’s Kathleen Hanna and Hole’s Courtney Love. She also drew from the DIY fan zines of the time, with their cut-out photos and ransom-note headlines tagging feminist poems and short stories in typewriter font. “Many people throughout history have not been given the opportunity to publish, simply because of their race or gender, and zines take that power back and create this straight line to the audience,” Angela says. “You don’t have anyone censoring you, editing you, telling you what to say, and it ends up being really authentic.”

Angela leaned on an all-female writing group she started in 2015 to create her core team. The group hosted a launch party for LYR Volume 7 that inspired the annual Babe Fest concert fundraiser in 2016, which evolved into Angela turning LYR into a nonprofit two years later. Now, she uplifts budding and established artists through events like Murals on Tour, for which board members Cesar Aguilera and Danielle Branchaud take point with Angela on commissioning paintings for roving exhibits that speak to social inequity. Cesar’s symbolic Realm of the Four Parts, displayed at Cape Coral Arts Center, reflected on his Incan ancestors and how their story has been skewed and cast as uncivilized over the years.

Drawing from her musical upbringing (her immediate family is made up of musicians), Angela’s big on the underground music scene. She’s the lead singer in her punk band, which released its first EP, “Never Relax,” this summer. The grunge and screamo rockers of the ’90s inspired her sound, and her vocal range shows it. “It’s a lot of women yelling, and it was always something I found really empowering because anger is not really an emotion that ‘looks pretty’ on women,” she says, gesturing with air quotes.

From the band’s recent release, “I Don’t Owe You Anything:”

Do you hate how I speak?

Or just what I say?

It’s because I don’t owe you anything.

Love Your Rebellion always splits the proceeds with other nonprofits that support disadvantaged or disempowered groups. Board member Jason Teeters, who mentors businesses and nonprofits at Fort Myers nonprofit the Collaboratory, helps Angela build community partnerships. In the past, Love Your Rebellion has contributed more than $2,000 to the Coalition of Immokalee Workers, Showing Up for Racial Justice SWFL and Planned Parenthood of Central and Southwest Florida. Last November, LYR partnered with Fort Myers arts center Neenie’s House and clothing brand Injoy to raise $4,000 to feed local families. While the dollar amounts may seem low compared to other area nonprofits, the group’s value is best-measured in social and cultural currency. “Bringing a national act that’s diverse is great for the public because they get to see something that isn’t offered here. On the flip side, for the local musicians, it’s a great opportunity to make connections that could further them in the future,” Angela says. “Every little thing helps, and we’re glad to be a piece of the puzzle.”

Going through recent issues of LYR—sold online and at a few Lee County art centers, including Alliance for the Arts—the message is unapologetically bold: Brooklyn-based Latina writer Christine Stoddard’s witty poem “Sorry for the Delayed Response to your Email” touches on generational differences; board member Danielle’s surreal painting of a nude woman surrounded by erupting volcanoes represents grace amidst the fire and mess; and Cesar’s coffee-stained charcoal and collage piece, Overanalyze, touches on themes of self-image and toxic beauty standards. Angela credits longtime board members and graphic designers Michelle Caraway and Annie Pritchard, who joined in 2015 and 2016, respectively, with refining the brand’s look. She points to photographer Jesi Cason for the engaging photography, including highly editorialized cover shoots—often starring Angela surrounded by a diverse cast of creatives, ranging from visual artists to musicians to drag queens. For the most recent issue, themed Riot, Jesi photographed the models dressed in gowns, crowns and jewels while tending to the garden at Fort Myers’ Remedies Parlor. The message: Nurture yourself in times of scarcity; create abundance within to thrive.

A few years ago, Angela tapped her good friend, Rebecca Martinez-Thomas, a San Francisco-based licensed marriage and family therapist, to add mental health exercises, like journaling prompts that encourage you to plant seeds for things that bring you joy and guided meditations. A grant from the City of Fort Myers allows the group to donate 500 printed issues of LYR, which publishes biannually and is archived online for subscribers, each year to Fort Myers’ Abuse Counseling & Treatment (ACT). The nonprofit uses the zine as a resource for survivors of domestic violence, human trafficking and sexual assault. Last summer’s issue, themed Metamorph, encouraged readers to heal through reconnecting with nature. The issue, dedicated to ACT with its mental-health focus, had worksheets centered around the four elements of matter. An activity called “Gather Your Resources” had readers fill a water bottle with their values—reflecting on the idea that our values are essential resources that ebb and flow like water and which we can draw from to cleanse, quench and create in our every day lives.

In 2019, Angela created a zine library inside Neenie’s House to stock titles from around the country, like the poetry-filled Corazón de Pollo, LGBTQ-positive Agender Agenda and Black Beans, dedicated to Black culture. “We’ve always published artists and writers from marginalized groups; that was the point of Love Your Rebellion,” she says.

Though LYR was born of Angela’s wild imagination, the punk-rock virtuoso credits her distinctive team for putting the words into action. Board member Ambrose Sullivan, who identifies as nonbinary and advocates for the autism community, uses their experience as a podcaster and Twitch streamer to bring fundraising efforts online. Newest board member Tara Calligan, who works as a producer for WGCU and co-hosts the Three Songs Stories: Biography Through Music podcast, weighs in on marketing strategies. To promote the events, Angela turns to graphic designer Annie to create hand-drawn posters that reflect the zine’s grunge vibes. “I like seeing other people shine; I like seeing other people have a place,” Angela says. “And, sociopolitically, I am an anarchist, I am a feminist and I believe there should be space for everyone.”