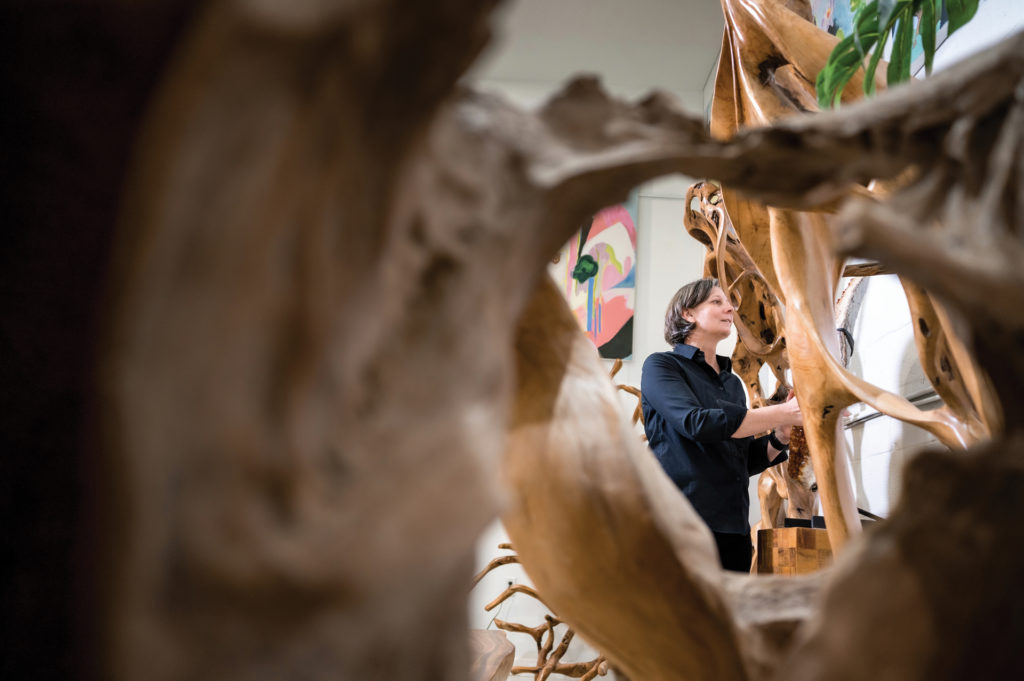 Naples Art District is comprised of a diverse collection of more than 80 artists and artisans, like Cori Craciun, who works with sustainable woods for her Sticks and Stones furnishings. (Photo by Anna Nguyen)

Southwest Florida in hurricane season can feel like a ghost town, but that’s not the case in the Naples Art District (NAD) when I visit on a June morning. The industrial park-cum-artist enclave buzzes with the healthy bustle of frames and coffee being lugged into studios to start the day.

I’d been to NAD a few times to see fellow artists and had started to sense there was more than meets the eye to the industrial quarter. So, over a few summer days, I set out to explore the district, eager to see what’s being made in our backyard.

I begin my self-guided tour with abstract painter Tammra Sigler, the first artist to call NAD home when she opened her studio in 2001. “My neighbor was a tennis racket manufacturer,” she says. Tammra, a graduate of the respected Maryland Institute College of Art, had moved to Naples that year. Coming from Baltimore, she knew to look for a space in an industrial area, where the large warehouse spaces, low rents and lax restrictions are catnip for artists.

Greeting me, she hands me a cup of coffee and begins moving carts laden with brushes to show me her latest piece. The work-in-progress is tacked directly onto the wall. “Often when doing a painting, I feel like I’m weaving, or doing a crossword puzzle,” she says. “It always starts as a loose grid that somehow comes together.” Tammra uses oil and interior wall paint to manipulate raw lines into punchy, primitive shapes, flowers, and dreamscapes. The nationally recognized artist ardently focuses on the process rather than aiming for a finished product. To see more choice art at this level, you need only drive two minutes to Holly Manneck’s studio to catch a glimpse of her Warhol-inspired pop art or visit Joel Shapses Studio to see former architect Richard Diedrich’s ephemeral, fluid paintings.

Or, simply pop over next door, where the faint sound of Bach’s Brandenburg Concertos may draw you into the studio of abstract painter Anna Rac, who listens to classical music while she works, applying each brushstroke in tandem with the rhythms of her beloved Baroque composers. Her formidable array of works are unified by their muted color palettes and elegant, repeating patterns. A trained pianist from Poland, Anna traded Chicago for the Gulf in 2010, and soon after, started taking classes with Tammra, who she’d heard took small groups under her wing. “Tammra was the most amazing teacher,” Anna says. “She is so tuned in, on an instinctual level.” When she was ready to spread her wings, it was natural for Anna to find a space close to her mentor.

Since opening in 2016, Anna’s found a broader community along Shirley Street, collaborating with artists she may not otherwise have known. In early 2020, she hosted a show with Cory Patterson, a former district member who goes by the moniker TenToTwo. At first glance, Anna and Cory would seem like an odd couple; his L.A. surfer vibe and gritty, tongue-in-cheek assemblages contrast sharply with her classically informed, meditative works. But seen together, their symmetries coalesce. The chains and gold leaf he adheres in his work mirror the continuously looping marks and metallic paints across Anna’s canvases.

The creative expression in Naples Art District is vast. Within a couple hours, I’ve gone from admiring abstract canvases to talking music with a 27-year-old luthier (or, a craftsperson who builds and repairs string instruments) at Tyler MacDonald’s studio, Tyler Mac Guitars. The wunderkind fabricates electric guitars by hand, and it’s worth swinging into his showroom to see why there’s a waitlist for his handiwork. This creative diversity is a refreshing attribute of the district. Browsing the artist roster, I see I could return for a Japanese silk-dying workshop with Leigh Herndon at Inspirations Artists and Design Gallery, go scope the gargantuan printer that dominates the studio of black-and-white photographer Marc Damon, or pop into Naples Art Studios and peer over district founder Richard Rosen’s shoulder as he applies a chromatic glaze to one of his sculptures.

But for now, I’ll go in search of more music at Musebox Arts, where Jan Edwards–a songwriter with Nashville clout–is inside strumming her acoustic guitar. A self-described “experience maker,” Jan’s part of a growing group who use their spaces for more than their craft. Splitting time between her native Minneapolis and Naples, Jan, who started painting a few years back, set up Musebox in 2021. She enlisted interior designer Judith Liegeois to curate a bold-but-practical interior that accommodates producing music and painting vibrant watercolors. As we walk around, Jan plucks at her guitar reflexively. She tells me that in the upcoming season she’ll host songwriting residencies and live music, adding another sensory experience to NAD’s events.

With more than 85 tenants, Naples Art District has the largest concentration of artist studios in Collier. But the surrounding area is still largely industrial. Most neighbors are tradespeople whose instruments of choice are more akin to those of the artisans who call the district home. Braving the steady flow of contractor trucks, I cross to the other side of Shirley Street to Sticks and Stones Collection. Opened by Cori Craciun in 2018, Sticks and Stones fulfills a lifelong dream for the former restaurant owner to design and craft furniture. The woodshop has an immaculate showroom that displays several of her striking live-edge tables. Soon after opening, Cori welcomed artist Christy Noonan to hang her loose, colorful oil paintings of waterlilies in the space, exemplifying how artisans and artists work side-by-side in the district.

From there, I head toward the southern end of Shirley Street and into the packed parking lot at Clay More Ceramics, known for its pottery classes and strong sense of community. Walking in, I pass by two low, sturdy tables with clay drying in the sun. Sara Wilson opened Clay More in 2013 after a demanding career in law enforcement. “I found clay and never turned back,” she says. “Any time you hit that clay, you lose track of time and go to your happy place.” Tables line the perimeter of the massive, open work area, serving as individual studios; even in the low ebb of summer, artists bustle around in nearly every space. Ceramics wheels, sensibly affixed with equipment to make them more ergonomic for less-mobile potters, face each other near open slop sinks. When a neighboring industrial unit came up for sale two years ago, Sara snapped it up, effectively doubling Clay More’s square footage. “You have to enjoy the process more than the product,” she says, gesturing toward the lively activity.

By now, I’ve seen a lot of abstract-leaning work, and as a figurative artist, I’m curious to find like-minded individuals working in more traditional styles. Tammra had suggested I visit Wendy Wagner, who creates precise, representational portraits in red chalk and oil paint. “It’s not just a hobby,” Wendy tells me when we meet. “It’s about discipline.” Wendy attended Studio Incamminati, an art academy in Philadelphia that teaches methods used by artists like Rembrandt and Renoir. After moving to Naples in 2021, she set up her space at Art2Amaze Studio and Gallery, where she teaches private lessons. Though many of the artists along Shirley Street teach, Wendy is one of the few that focuses on figurative art. She allows me to peek into the classroom she splits with a dozen or so studio mates and waves merrily at a small group of girls finger painting under the guidance of one of her neighbors.

My last stop is smallwalls, operated by husband-and-wife Gary and Mary Day. I’m captivated by Mary’s woven installations punctuating the bright interior and Gary’s digital prints tacked on walls and laid across the tile floor. Former art professors who relocated to Naples to be closer to family, Gary and Mary are unassuming yet intellectual, the sort of artists who create sophisticated works that require a meticulous obsession with their respective processes. “It’s so cathartic, especially as I have to soak my materials in water first,” Mary says. She weaves rattan reeds into intricate, organic shapes that she suspends from the ceiling so that they seem to float and move through the air. Gary manipulates images digitally, using software and gaming programs to develop elaborate, repeating motifs that read like optical illusions. Nearly everything in smallwalls has a sense of kinetic movement. “I make art out of curiosity about the effect contemporary visual media has on how and what we perceive,” Gary explains.

Curiosity drives much of the work in the Naples Art District. Artists here are committed to the process and eager to let the public peek behind the curtain. This reflects founder Richard Rosen’s initial mission for the artists clustered along Shirley Street to simply share their creative process with the public. From the beginning, he envisioned fostering a feedback loop that benefits both creator and audience.

Before I leave smallwalls, Gary points to a piece with undulating blue lines that are more abstract than aquatic to the Nebraska transplant. “A gentleman came in during an Art Alive! event and told me he saw the waves of Lake Michigan in my work,” Gary shares. “It’s powerful to know your work can connect with others in unintended ways.”