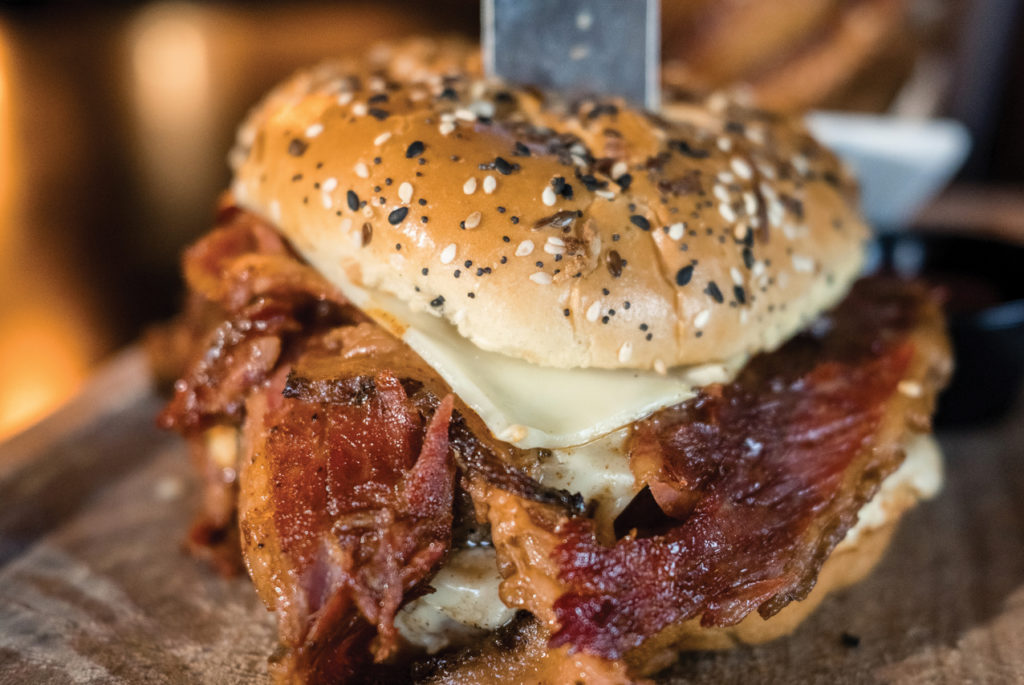 Longtime locals remember when Cape Coral was known as ‘the home of the newlywed and nearly dead,’ or the shorter version, ‘Cape Coma.’

The largest city in the region was developed in the 1950s and marketed to retirees from the north looking to live the Florida dream at an affordable cost, as well as young families hoping to get more bang for their buck than they’d get in Fort Myers or Naples.

Around 2012, sleepy Cape Coral woke up to find itself as a growing dining destination. That’s when local celebrity chef Shannon Yates brought his culinary talents and popularity over the bridge from Fort Myers (where he was famed for his talent-incubating Cru, among other ventures) and introduced Nevermind Awesome Bar & Eatery. Other restaurateurs and bars followed suit—first slowly, and more recently, in droves. The Parkway—a busy thoroughfare that runs through the South Cape—became known as ‘the strip,’ an area where diners and drinkers could choose from a veritable smorgasbord of great food and drink, hopping from one spot to the next until the town’s generous 4 a.m. closing time.

Shannon grew up in Cape Coral and believed it could be transformed into a hip haven for food lovers—and he was right. Shannon passed away in 2021, at age 49, due to complications from COVID-19, but his legacy endures. Part mentor, part cheerleader, he helped other restaurants establish themselves in the new dawn of Cape Coral dining. His take: the more, the merrier. Shannon was like the Pied Piper, leading the next generation of the local food world to his childhood stomping grounds.

Dewey Sanders, an owner at Nevermind, says that the restaurant hasn’t skipped a beat. “We’re continuing to see Shannon’s vision through,” he says. The low-lit establishment, with its long wooden bar, became a stage when Shannon was cooking in the open kitchen. Now, even with the lead performer no longer taking the curtain calls, guests pack in for the signature smoked prime rib or fork-tender filet mignon.

As food lovers flocked to Nevermind, other establishments started popping up. First, there was Nice Guys, a craft beer and gourmet pizza spot that draws a late-night crowd for esoteric pies (one with peanut sauce, bacon, and strawberry jam; another with a riff on General Tso’s chicken) and inspired nightcaps. Fifteen minutes away, on the waterfront near The Westin Cape Coral Resort at Marina Village, Gather beckons with super fresh seafood and sunset views. The creators also opened nearby Fathoms with chef Fabrice Deletrain, a third-generation chef, born and raised in Paris, who brings Mediterranean flair to the menu with his seafood paella and grilled octopus. Not far away, under the same Hospitality Group Holdings’ umbrella, you’ll also find The French Press (a coffee and gelato bar), Black Salt Culinary (a fine-dining catering operation) and, soon, Next Door (a fresh, homemade pasta joint).

On Southeast 47th Terrace, a road parallel to the Parkway with its own buffet of options, Cork Soakers Deck & Wine Bar is popular for its Thursday Ladies Night. Here, you can order a four-course tasting menu with two drinks for under $30—perfect for a girls’ night out. A few streets away, Jungle Bird Authentic Tiki recalls tiki culture—the Cali-born, rum-fueled bar style that ruled the party scene from the ’30s to the ’70s, then fizzled before returning with a force in the last decade or so. Acoustic performances and a steady slate of Pacific Rim-inspired small plates set the scene for the elaborate cocktails garnished with fresh flowers. Try the eponymous house cocktail, which blends Campari, blackstrap molasses rum, pineapple and lime.

Nevermind may have sparked the Cape’s culinary rebirth. But there are plenty of long-term institutions that set the scene: Ariani, a cozy spot that’s been serving up northern Italian-inspired dishes; Rumrunners, loved for its stellar seafood and waterfront location; and Lobster Lady Seafood Market are all longtime favorites.

For the most part, Cape Coral is known for casual vibes. Diners know they can increasingly rely on the Cape for no-frills, legit international fare, like that found at Indian bistro Masala Mantra and the Peruvian Kampawasi Tu Casa, which has been generating plenty of buzz since it opened last year.

And, places like The Spot, Taco Works and the Keg & Cow, promise good food and a place to chill. In that same let’s-just-hang-out vein, craft drinking dens are making a strong splash in the Cape. Wicked Dolphin Rum debuted in 2012, with top-shelf spirits, made with Florida cane sugar. And, more and more brewers are planting their flags in the city, bringing the community-first ethos breweries are known for. Scotty’s Bierwerks in North Cape offers 18 beers on tap, food trucks, and stand-up comedy, while Eight-Foot Brewing, where the team often hosts live music and trivia, is all about educating its patrons on the varied complexities of beer.

Looking ahead, we see a city whose culinary community continues to expand and evolve. Artisan food vendors, lured by the relatively affordable rents, are making a home in the Cape, bringing diverse offerings. The local-favorite charcuterie caterer Grazing Haus recently opened her brick-and-mortar on the Parkway. Ali Eck designed the space to be a food lover’s paradise, with fine cheeses and chocolates, gluten-free sweets, artisan sodas and locally made jams. Next up, locals are anticipating Prime 239 Steakhouse, slated for a September opening. The restaurant, which promises fine cuts, wine lockers and a plush outdoor patio, has been a long time in the making. “My customers [from Ceno] are screaming for a steakhouse,” says owner George Lukas, who is also behind the nearby Ceno Grille. “I’m hoping this is a destination for birthday parties, graduations—something where people bring a little bit of style to the Cape.”