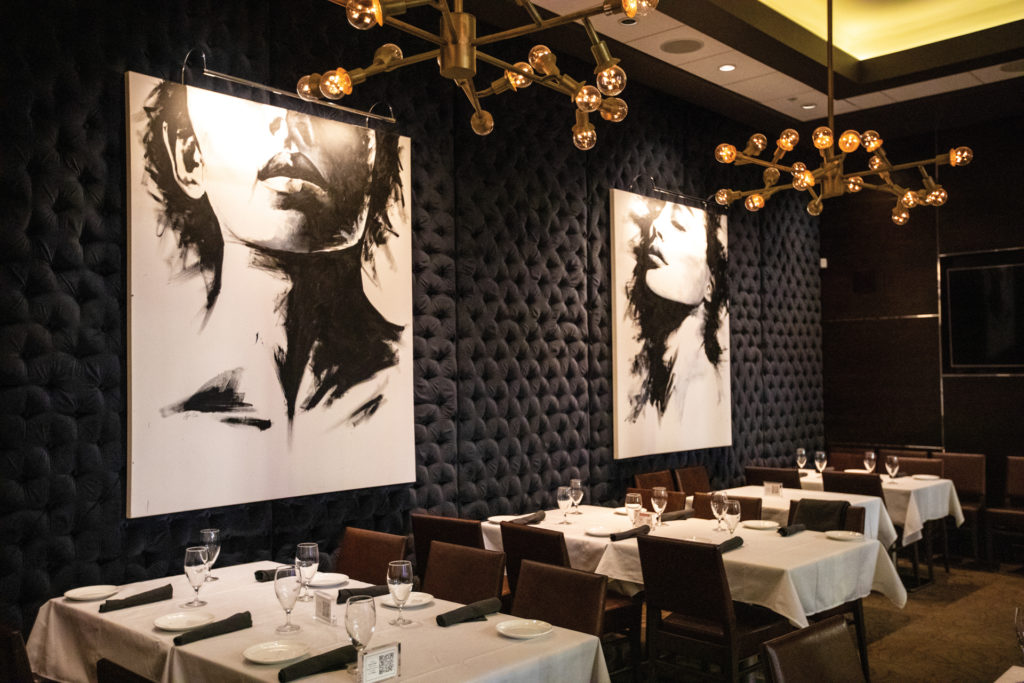 The very best restaurants design their spaces so that they evoke a feeling, from romance and sophistication to nostalgia and wanderlust. From the earliest stages of their development, our favorite spots set the scene. The moment you step into places like DUSK at The Ritz-Carlton, Naples, Sails Restaurant off Fifth Avenue South and The Silver King Ocean Brasserie in Fort Myers, you know you’re in for a special occasion.

“When we design a restaurant, it is a very refined process,” says David Miller, president of Cameron Mitchell Restaurants, which owns Ocean Prime and Del Mar Naples on Fifth Avenue South in Naples. “We create a DNA through nuances. It’s a filter for everything we do—menu, uniform, etc.” There are 17 Ocean Prime restaurants around the country, and no two are the same. The Naples location is best described as modern, with timeless luxury. Rich gray tufted fabric banquettes run straight to the ceiling in a private dining room. In the main space, stacked stone hugs warm walnut panels, smartly lit with Sputnik-style custom chandeliers, to give a fresh take on midcentury modern. Tom Ford could shoot a sequel to A Single Man in the restaurant without missing a beat.

“It all starts with the message you are trying to send to the public,” Skip Quillen, owner of Culinary Concepts says. (Under the Culinary Concepts umbrella, you’ll find Chops City Grill in Naples and Bonita Springs, as well as Pazzo! Cucina Italiana, Yabba Island Grill and The Saloon.) While most restaurateurs say they start with the menu, Skip says you design around both visions: the food and the atmosphere. In the past three years, he spent more than $3.5 million renovating Chops City Grills and Pazzo! Cucina Italiana. With Chops, he wasn’t trying to reinvent the wheel—he just wanted a more gorgeous wheel. “I wanted that old-school, fine dining feel,” he says. “I wanted to go for the ultimate steakhouse.”

Skip had the dark, dramatic steakhouses of his youth in New Jersey in mind when he hired interior designer Theresa Gillan and faux-finishes artist Shiree Nichole to redesign Chops in Bonita. Now, Italian crystal chandeliers illuminate the plush space, with crushed black velvet banquettes and private booth draperies, and silver-accented purple walls. The details create a sense of intimacy that Skip says is key.

For other restaurateurs, such as Ingrid Aielli, who owns Barbatella with her husband, chef Fabrizio Aielli, it’s about honoring tradition while being progressive. “I was looking for a trattoria with a modern twist,” she says. The space is made up of two separate, but connected buildings. Drawing on Fabrizio’s Italian heritage, architect Griz Dwight imagined the two buildings as reunited sisters who share the same Italian background, but have lived different lives. While one section (which houses the pizza oven) has traditional brick flooring and black paneled walls, the other area (the bar) makes a statement with the help of 1,400 bright green plaster medallions covering the walls and ceiling, and chandeliers confined to bird cages. “Together, the spaces charmingly illustrate two different styles of Italian architecture,” Ingrid says.

A similar approach to international inspiration can be found at Rocco’s Tacos and Tequila Bar at Mercato. “When we developed the first restaurant 16 years ago, we traveled through Mexico buying furniture and fixtures,” owner Rocco Mangel says. “We literally knocked on doors and then bought the doors.” Rocco loves handcrafted pieces, like the new Mestiza chairs or the lobster traps that were turned into hanging pendant lights over the outdoor patio or the Día de los Muertos masks that hang inside the Mercato location. He spotlights Mexico’s most famous spirit through a backlit tequila wall that anchors the space and lends a theatrical element when bartenders pull out a ladder to reach top-shelf spirits.

In the modern restaurant experience, every element is planned—down to the acoustics. Larger establishments, such as Rocco’s and Ocean Prime, employ sound engineers and lighting designers. “Lighting will make or break a restaurant,” David says. “We like to stay around 2,200 kelvin.” Any higher is too blue; any lower is too amber. Throughout the day, the mood changes as different settings are programmed: Walk in during the day and you experience the same cool, bright shine of daylight outside; at night, bulbs dim and ancillary lights kick on to provide flattering illumination and just enough visibility for menus and food.

At smaller restaurants, the design may develop more organically, but it’s no less impressive. Restaurateurs Phong Ho and Michael Jaenvega wanted the setting to deliver on the promise of their new OASIS The Kitchen Lounge in Ave Maria. Hanging vines, a marble bar with deep veining that represents a flowing river and rustic elements all work to make you feel transported to a verdant oasis. The pair brought in interior designer Jorge Arroyo, who owns a boutique down the street, to create the space. At the center, a large, sculptural mask overlooks the scene through a sea of cascading plants, like Mother Nature guarding over her refuge. “A lot of people sit here for two hours,” Phong says. “They don’t want to leave.”