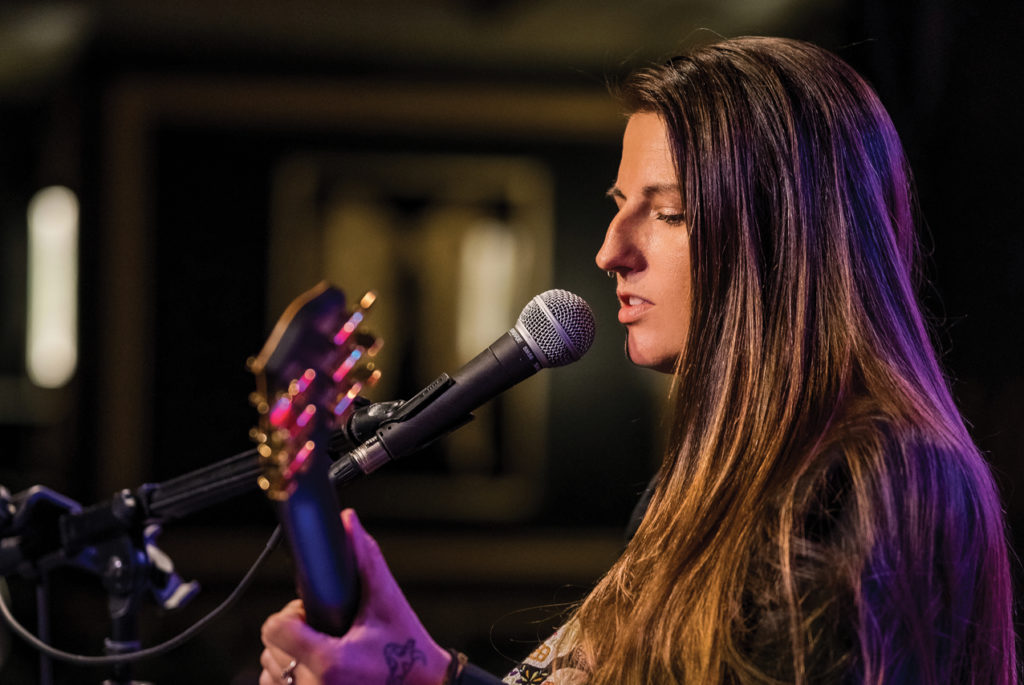 Country singer-songwriter Sheena Brook’s performances are part concert, part stand-up. She’ll belt out a moving cover or original about life, love and loss, and follow it with a self-deprecating joke, putting the crowd in the palm of her hand.

In 2017, Adam Levine picked up on Sheena’s powerful voice and charm when he selected her to participate in Season 12 of NBC’s The Voice. Though she didn’t end up taking the top spot, her abilities as a singer and songwriter catapulted her into partnerships with multi-platinum artists, like Sully Erna of Godsmack and Nick Wheeler of the All-American Rejects, who collaborate on some of her newer material. Sheena says collaborating with musicians from other genres has evolved her songwriting.

The Lee County native performs locally (at Cabañas Beach Bar & Grille and Sidney & Berne Davis Art Center in Fort Myers and ‘Tween Waters Island Resort & Spa in Captiva and in Nashville, where she splits her time.

Over the years, she has seen her hometown grow—and she’s grown along with it. In addition to playing solo, she participates in and produces songwriter rounds, including one during the Island Hopper Songwriter Fest in Fort Myers. She’s also the creator of the F.E.M. collective, which hosts events to support women and promote equality in the industry. “As a member of the LGBTQ+ community, I find the best way to connect with someone that might not usually try to understand me is through music,” Sheena says. “One thing we all tend to have in common is the love of music.” Catch her at Cabañas on Fort Myers Beach on Wednesdays.

Latin music is perfectly suited for our subtropical setting, and the Latin jazz group Miami Splash Band delivers a show guaranteed to make you move. With originals and covers in English and Spanish, their set lists include a little funk, reggae, salsa, bachata, cumbia, rumba flamenco, Latin rock and Caribbean beats. Each performance embodies the varied rhythms of the islands. The five-piece band—fronted by Cuban-born Havy Rodriguez—often plays as a duo or trio, with regular gigs at places like Naples Botanical Garden, Fernández the Bull Cuban Cafe and Buddha LIVE. Percussionist Arisdani Beune and Cuban lute guitarist Carlos Nuñez are almost always part of the show.

Havy started playing the bass when he was 17, following in his father’s footsteps, a well-known composer and guitar player in Cuba. After touring Mexico in 2001, Havy came to the U.S. with $200 and a guitar. He spent some time in New York and L.A. before moving to South Florida, where he founded Miami Splash Band.

He has a strong creative vision for the band that relies heavily on improvisation and audience engagement. “We never play a cover song the same way or in the same style as the original version,” Havy says. Rather than staying true to sound, they aim to deviate as much as possible from the original, drawing from Latin jazz to incorporate varying rhythms, keys and tempos to give the songs new life.

The traditional Cuban lute guitar and a custom Latin percussion set—with a variety of drums, bells and symbols—are just some of the things that set Miami Splash apart. They never play the same song the same way; the music is constantly evolving. “Live music should be spontaneous, innovative, never the same or overproduced, no matter how perfect or close to the original recording you want to be,” he says. “Improvisation is a gift from the American jazz that I grew up listening to and have adopted into our performance. It keeps our brains fresh to new musical ideas.” See Miami Splash Band perform monthly at Naples Botanical Garden.

When Luna Muni steps out with her violin, she defies expectations. She may be in a floor-length, slit gown sparkling in the glow of the Caloosahatchee Manuscripts sculpture at Sidney & Berne Davis Art Center, or walking through the streets in Fort Myers, purple violin propped on her shoulder as she flows along to her notes.

Born Lena Rodriguez, Luna, who grew up in a musical family, began taking violin lessons when she was 4. Now, the 28-year-old artist performs worldwide, including shows at the historic Apollo Theater in New York and opening gigs for Grammy Award-winner Chrisette Michele and “Foolish” singer Ashanti.

For Luna, music is an expression of the soul and a conduit for raising the world’s consciousness. “Each time I play, I’m reminded how much that we are all one,” she says. With each stroke of her bow, Luna evokes serenity. She’s honed her melodic sound over eight years performing at open mics, weddings and events, and adds elements of electronic music and spoken word to her songwriting and performances. She often duets with local poet GiGi Hendrixx. The duo pumps up the crowd with girl power verses—Luna beat-boxing as GiGi raps:

One for the money,

Two for the show,

Three for all my sisters who are reaching their goals

When she records, Luna adds rhythmic backing tracks to her swooning violin and softly dictates poetic lines about releasing toxic feelings. The result is an inspiring blend of classical violin and new-age music. As a solo performer, she commands the stage and shares her energy with the audience. Each song, every note is an invitation to join that oneness. “Music gives soul to the universe, wings to the mind, flight to the imagination, and charm and gaiety to life and to everything,” she says. See Luna perform most Monday nights during the Poetz Realm at CB2 in Fort Myers.

Listening to soul and reggae band the Freecoasters is a mind-altering experience. The powerful, heartfelt music grabs you and holds on tight. The synergy between the band members is evident as they move and sway in time with each other, hitting pauses and high notes as if they’re one organism.

In the group—made up of singer and rhythm guitarist Claire Liparulo, bassist John Schiller, lead guitarist Constantine Grim, keyboardist Shane Praefke, trombonist Nick Grim and drummer Cory Williams—everyone contributes, but Claire is the lead. She’s a force of nature, pulling in the audience with fierce vocals and a magnetic stage presence.

Fort Myers-born John and Port Charlotte-native Claire started playing together 10 years ago. Other members, most of them transplants, joined over the years. “So many people move here, and they naturally bring pieces of their local art or music scene with them,” John says. “That has cultivated a diverse and vibrant arts community.”

Playing within the tourist-driven melting pot has earned them fans beyond the Sunshine State. When they tour, “we have fans who come to see us in Rhode Island, Connecticut, California, Asheville, Nashville and Chicago who met us here at shows,” Claire says. See Freecoasters perform every fourth Friday at Fathoms in Cape Coral.

Prolific Jazz trumpeter Dan Miller’s resume includes The Harry Connick Jr.’s orchestra, recording with “It’s Not Unusual” hitmaker Tom Jones and studying with greats like former American Conservatory of Music faculty member Brad Goode. Watching Dan perform, you see the music move through him. “We love the music, and we dig in and swing out with intensity every time we step on the bandstand,” Dan says.

When he’s not captivating crowds at Naples’ The London Club or The Barrel Room in Fort Myers, Dan plays with the Naples Philharmonic Jazz Orchestra at Artis—Naples. The group is led by saxophonist Lew Del Gatto, who worked with Frank Sinatra and was a member of the Saturday Night Live Band on and off from 1975 to 2005. Outside of the Naples Philharmonic, Dan and Lew have performed together for decades, and their onstage rapport speaks to their musical bond: Their call-and-response playing style is like watching two old friends have a lively conversation. The exchange brings to life the covers they play from Charlie Parker, Thelonious Monk, George Gershwin and other greats in the genre.

The Chicago-bred musician considers his audience friends. Being a regular at his shows means Dan knows your name, your story and your favorite jazz songs. “I enjoy making connections with the audience members who follow us no matter where we are playing,” Dan says. See him perform with Lew on Thursday nights at The Barrel Room or with the Naples Philharmonic at Artis—Naples throughout season.