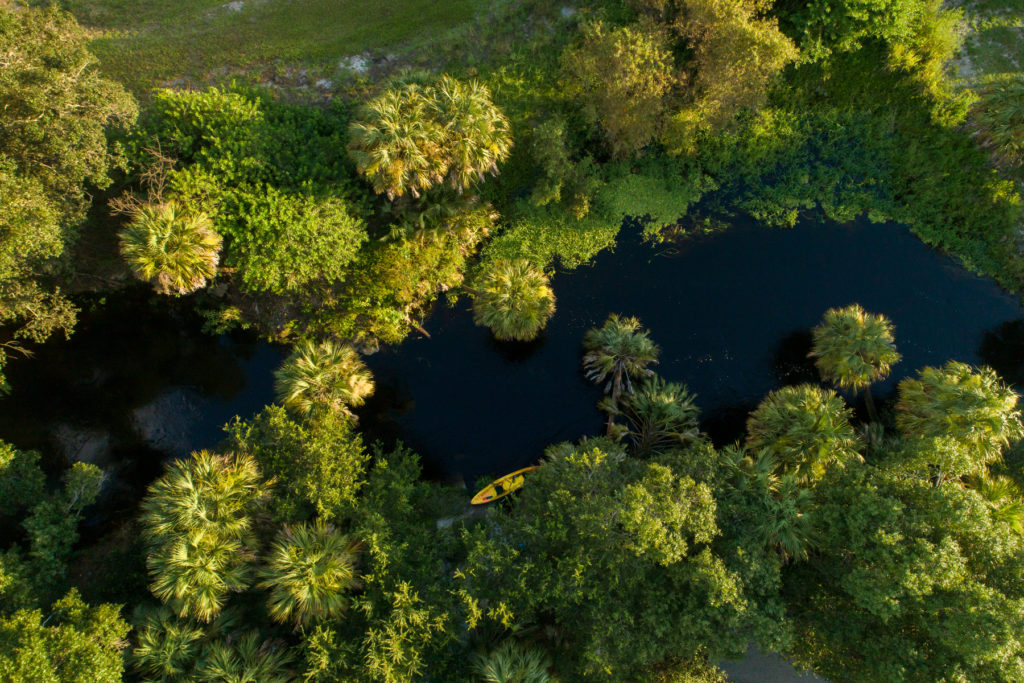 The Great Calusa Blueway takes paddlers through the Gulf’s winding backbays, curving shorelines and flowing channels in Lee County. The parks and rec department created the 190-mile paddling trail in 2002 and named it for the Calusa Indians who explored the cabbage palm-lined banks in their cypress dug-out canoes up until the late-1700s. Though the trail isn’t continuous (the routes are split up in three sections—Estero Bay, Pine Island Sound and Caloosahatchee River), it covers the county’s major waterways, granting travelers access to varied wildlife preserves, historical sites and pristine natural islands, many of which are only accessible by water. In honor of the trail’s 20th anniversary, we sent photographer Darron Silva on a kayak adventure with Lovers Key Adventures’ Stephen Denmark to capture the wild and sweeping beauty of the Blueway.

Part one of the trail is waymarked around Estero Bay, one of Florida’s first aquatic preserves, where the scene transforms from brackish, mangrove-lined channels closer to the Gulf into a dotted landscape of oaks and slash pines as you head inland toward sites like Koreshan State Park—one of about 55 small-craft launch points on the Blueway—and the shaded Imperial River.

Mangroves are synonymous with Southwest Florida and they’re plentiful along the Great Calusa Blueway. To get up close to these natural wonders, focus your paddling efforts within the Estero Bay portion of the trail, around Lovers Key, Mound Key and Estero Bay Preserve State Parks. Along with thickets of the gnarly trees, you’ll find 2,000-year-old shell mounds that Calusa Indians built (at Mound Key), more than 30-feet above sea level. The view from the top is breathtaking.

The Pine Island-Matlacha segment of the Blueway is defined by backwater preserves, private beaches and character-filled islands. The Sanibel Causeway, J.N. “Ding” Darling National Wildlife Refuge, Pine Island and Gasparilla Island State Park are all stellar points of interest. Hop off at the Matlacha Park and Boat Ramp to have lunch in the quirky, colorful town. Adventurous paddlers can continue up to Cayo Costa State Park to camp along its 9-mile stretch of white sand. For an urban paddle, consider the Caloosahatchee River, the third section of the Blueway, with launch points at Cape Coral Yacht Club, Fort Myers’ River Park and the town of Alva.