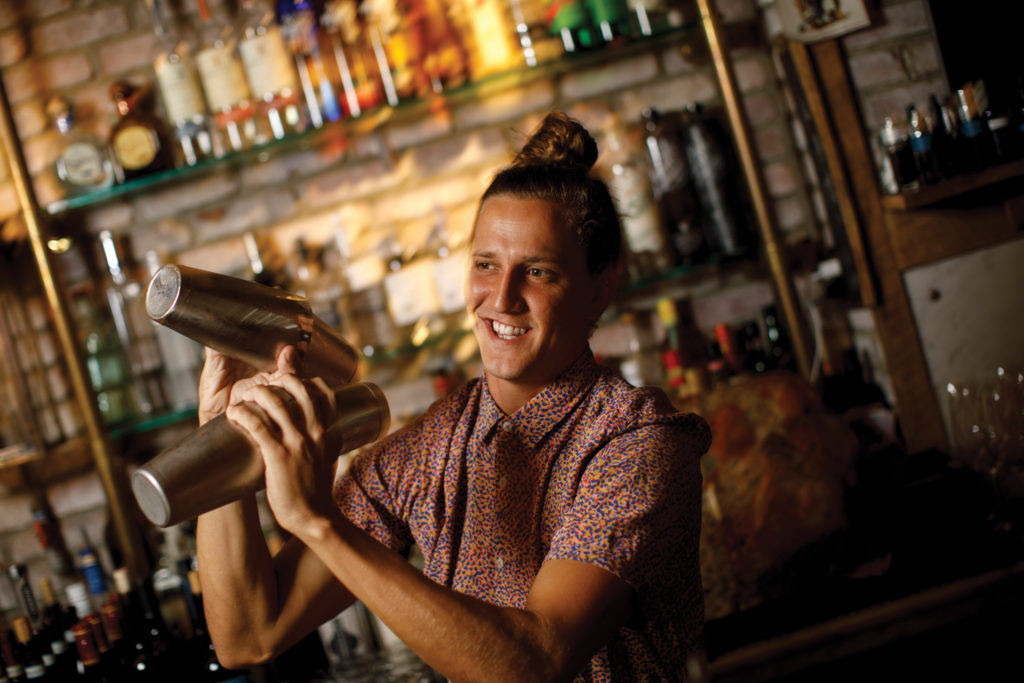 The Naples native worked on a crabbing boat in Alaska in summers and at Third Street South’s Campiello during season before returning full time to his hometown for the opening of Bar Tulia in 2014.

“Get your bearings at Old Naples’ Captain & Krewe Seafood Market & Raw Bar, where the fish case always displays the freshest finds. Sit at the raw bar and order oysters with a glass of bubbles, or stop in for stone crab in season. At Key West-inspired The Real Macaw in East Naples, you’ll find French-Caribbean and finer fare, plus great tiki-style drinks. Order the Trinidadian crab cake for the table. It’s pan-seared and served with a roasted chipotle remoulade that ties all of the flavors together. Don’t leave without the Key lime pie.

Downtown, two blocks from the pier, Old Naples Pub is a local favorite, particularly for the traditional-style fish and chips and basket of beer-battered onion rings. You’ll often walk in to find a performance on the century-old piano. Further east, Rumba Cuban Cafe serves the best Cuban sandwich in town. The menu includes classics like ropa vieja, stewed flank steak, and ham croquetas—end lunch with flan de la casa topped with grated coconut and a café Cubano. Nearby, La Oaxaqueña Taqueria is my favorite spot for Mexican food. The colorful little taqueria is hidden behind a grocery storefront off Davis Boulevard (you have to go through the corner store to reach the restaurant). Order a plate of classic asada, chicken, or al pastor pork-and-pineapple tacos and a michelada with spicy chamoy rim dip.

Another great, casual place is Passage to India, a family-owned-and-operated restaurant that’s been around for 30 years and serves up some of the most authentic Indian and Bangladeshi dishes. It’s nothing fancy, and that’s part of the charm. You can’t go wrong with any fish on this menu, like the salmon or grouper tikka masala, and there are plenty of great curry and dhal dishes for vegetarians.

After 15 years in New York, working at spots like Michelin Bib Gourmand-awarded Tanoreen Restaurant, South Florida-raised Rainier moved to Bonita Springs to shake up the cocktail scene two years ago.

As a bartender, our hours make it difficult to ever go to brunch, but just down the street from Chartreuse is a great cafe called Downtown Coffee and Wine Company. It’s no bigger than a thimble, and the owners (who are also behind The Bohemian Restaurant down the street) make an effort to source locally—even the specialty coffee is roasted by the Bonita-based Grumpy Goat Coffee Roastery. Downtown Bonita is starting to boom thanks to locally driven places like these.

When I need a change of scenery, I head up to Cape Coral—it’s a little different there; you have to drive to find the good stuff. You’ll often find me at Palace Pub & Wine Bar. It’s a natural wine shop and lounge that often has performances by local artists and tastings paired with food by local vendors. Wines are sourced from small producers around the world, and there’s a $10 corkage fee if you shop and want to sip your bottle at the bar.

In Naples, there’s a tiny spot called The Cave Bistro & Wine Bar that—in addition to an extensive wine collection (the owners have been collecting wine for over three decades)—serves fantastic cocktails. The bar manager, Kory, is always experimenting with new drinks, so ask what he’s excited about and request the reserve list for off-menu items. One of our alums also recently opened Cocktails and Things, in San Carlos Plaza in Fort Myers. Their micheladas are fantastic but not always listed on the menu. While you’re in the area, stop into the boutique and wine bar Remedies Parlor and browse through their eclectic mix of curated curiosities, like antique furnishings, jewelry, and a modern apothecary with incense and sage sticks. You’ll want to stick around and admire the garden, where you can shop for plants or take a seat and sip a glass of natural wine or pét-nat (naturally sparkling wine). If you’re hungry, a few blocks away is one of Fort Myers’ best-kept secrets—McCarter’s BBQ. It’s right off the highway, and there’s no sign. You know how you’ll find it? There’s a smoker outside, so follow the billowing cloud into the little white shack, where there are only two things on the menu: ribs and chicken.

After graduating from The Culinary Institute of America, the Bostonian moved to Florida in the middle of the pandemic and joined the team at Gather.

Start at Bullig Coffee & Bites, a cute waffle and coffee shop located on a little side street just a few minutes from downtown Fort Myers. Their hand-poured waffles are amazing and come with a variety of sweet and savory toppings. Everything is homemade—down to the syrups they use in their flavored lattes and the blueberry dipping sauce for the waffles. For lunch, the place to go is MAKS Asian Kitchen & Sushi. It’s hidden in a strip mall, but don’t let that deter you. MAKS has some of the best spicy tuna crispy rice around. I love going with friends and ordering a few sushi rolls and a bottle of sake. For sunset views and wine, head to Oxbow Bar & Grill and sit dockside at one of the tables along the Caloosahatchee River. Order the prime burger with applewood smoked bacon (it’s one of the best in Southwest Florida). This is a great place to start a night out in downtown Fort Myers—especially with the Captain “Francis” Gone Bananas cocktail. After dinner, walk over to The Indigo Room for karaoke.

In downtown Bonita Springs, make dinner plans at The Bohemian, a newish spot with an inventive menu that champions local ingredients from nearby farms and fishermen. A bottle of sparkling wine and their warm crab and lobster jar is my version of the perfect night. A new addition on Fifth Avenue South in Naples, Mediterranean-inspired Del Mar (from the same group behind fine-dining institution Ocean Prime) is where I go when I want to treat myself. The service is great, the cocktails are delicious and the people-watching is unbelievable. But the food is really the star here—order the sea bass, which comes in a light tomato broth with confit fennel and a creamy labneh, a perfect dish in the Florida heat. For casual fare, follow the traveling pop-up kitchen @TheHummingbirdTable and see where wife-and-husband team chef Jackie and Stacy Parker happen to be the week you’re in town. The duo pumps out incredible bites (think comfort-street food like red beans and rice, fried chicken and hand pies) at breweries and events across Lee and Collier counties. They also make and bottle their own Red Savina hot sauce, which I put on almost everything. You’ll love it—and them—as much as I do.

If you’re in the mood for quick takeout, Thai Udon Café Estero is my go-to. Their massaman curry is out of this world, and I order the chicken fried rice at least once a week. Don’t even get me started on the tum kha soup.