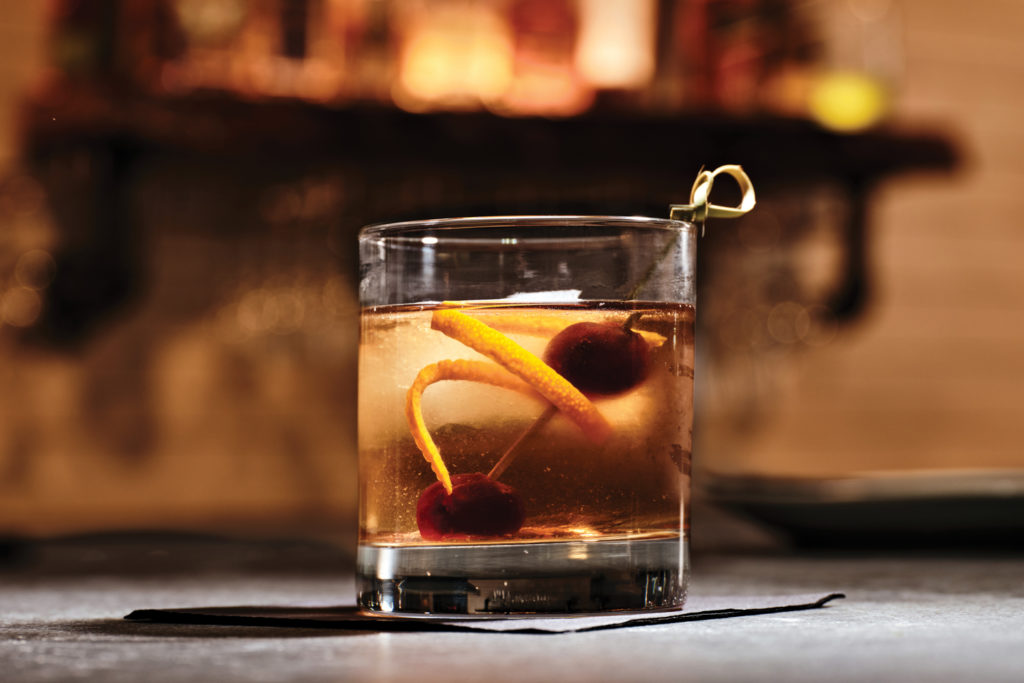 Harold and bartender Jay McAuley stock a few extra-special whiskeys, like the Orphan Barrel Whiskey Distilling Co.’s rare, small-batch casks, which they pour on the house for fellow enthusiasts. (Photo by Dan Cutrona)

Before farm-to-table was de rigueur in Southwest Florida, chef Harold Balink was serving Fort Myers diners soulful plates of the region’s bounty at his namesake restaurant. His menus have always been defined by Pine Island shrimp on beet linguine, salads resplendent with hunks of blue crab and meats carefully sourced from local ranches.

But one of Harold’s core passions—whiskey—was missing from the menu. So when he closed the restaurant last year to expand and revamp the space, he decided to focus the bar program on the golden elixir. Harold calls the decision “a completely selfish endeavor.”

“It’s my favorite drink, and the restaurant is called Harold’s,” he says with a shrug. Of course, he’s also tapping into a nationwide trend where many modern bars now practically glow in shades of amber. “You see 75 different whiskeys on the shelves where there used to be vodka,” he says.

His love for whiskey began with his grandfather, a restaurant worker, in his hometown outside of Boulder, Colorado. “As a kid, I was getting sips of scotch,” he says. His family would also pour him a splash of wine with dinner, so he grew up appreciating the taste of alcohol. “I never had that shock, that rapid learning curve, the hangovers from getting to know liquor,” Harold says.

As his tastes developed, scotch and rye whiskey became his tipples of choice. “Macallan 12 is my go-to. I love the sherry oak aging, and 12-year scotch is a personal preference,” he says, adding that older scotches make better after-dinner companions. “Whistle-Pig 15-year Barrel Select Rye is probably the most perfect whiskey I’ve ever tasted. It’s totally subjective, but it offers everything I want in whiskey—oak and vanilla and caramel and butterscotch character, but it’s not cloying. It has that warm alcohol feel, but not a burn.”

Naturally, scotch and rye figure significantly on Harold’s changing list of roughly 25 single barrels, blends, bourbons, Irish and Japanese whiskeys. He’s especially proud of the rare bottles from Orphan Barrel Whiskey Distilling Co. in Tennessee, which sells hard-to-find, small-batch casks at premium prices. “I don’t get many,” he says. “Honestly, I don’t even charge for it. I just pour a splash for customers who I know will appreciate it.”

Harold prefers to drink his whiskey neat, maybe with just a teaspoon of water to open the nose and round out the flavor. But the bar also slings perfectly balanced cocktails, made under the direction of Harold and well-loved Fort Myers bartender Jay McAuley. The Old Nut combines Four Roses Single Barrel Bourbon with black walnut bitters and a splash of Frangelico—just enough nutty sweetness to complement but not overwhelm the fine bourbon. The Smoked Old Fashioned muddles Willett Family Estate rye, Amarena cherry and blood orange bitters.

Of course, the wine list hasn’t gone away. Harold, a certified advanced-level sommelier, offers a red-heavy selection that runs from high-end staples to fresh discoveries. But for him, the new bar program is a major enhancement. We’ll cheers to that.