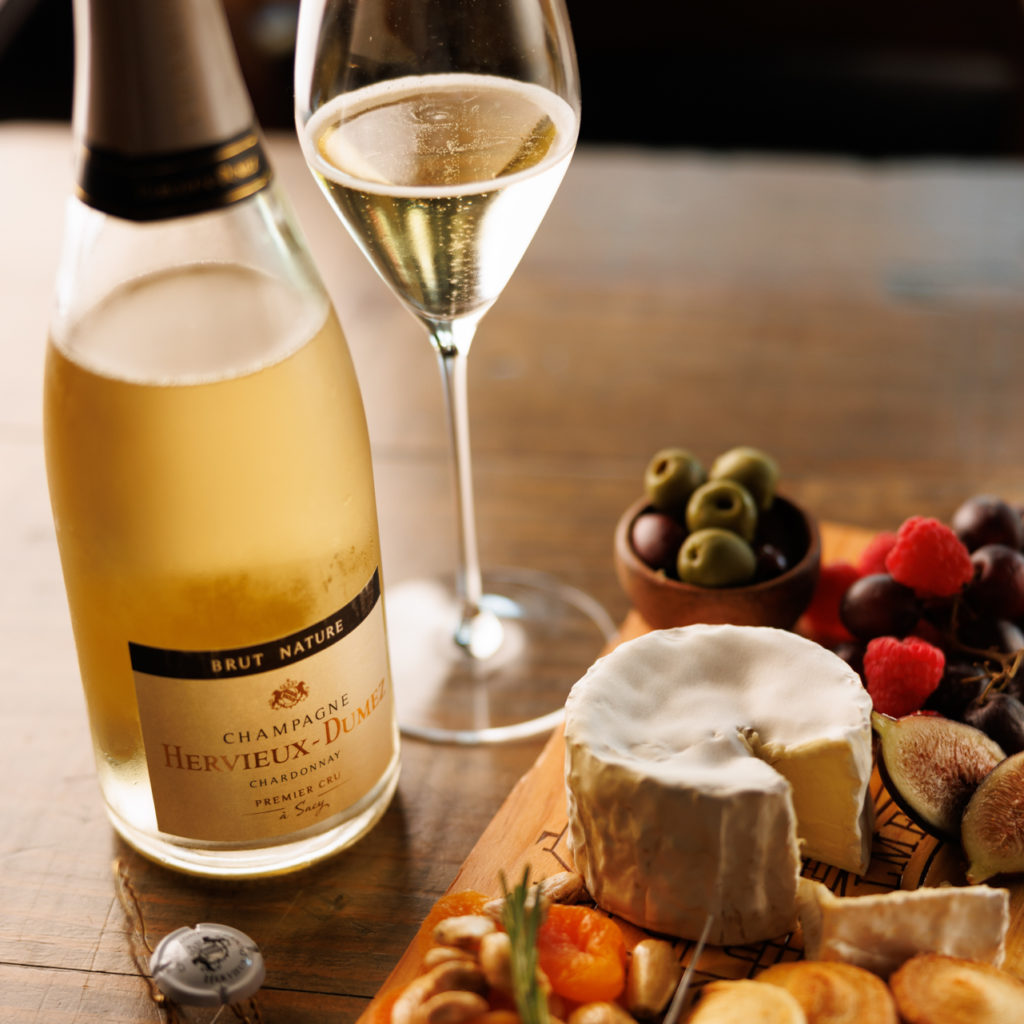 The Champagne house practices minimal-intervention winemaking and sustainable viticulture with no insecticides—bees, chickens and caterpillars help tend the vines. (Photo By Brian Tietz)

Champagne may be a centuries-old invention, but one particular bottle currently has Lexi Strachan of The Wine Store in Naples bubbled over with excitement: Hervieux-Dumez’s Brut de Chardonnay Premier Cru. This Blanc de Blancs is crafted in a brut nature style, meaning no sugar is added during the dosage when bottles are topped off before final corking. And unlike Champagnes from large maisons like Roederer and Mumm, which source grapes from other farmers, grower Champagnes, like this one from Hervieux-Dumez, are produced by winemakers who grow at least 95% of the fruit in their vineyards.

Brut nature Champagnes (also called non-dosage) have grown enormously in the U.S. as grower-producers pave the way for terroir-driven bubbly. These bottles are often more artisanal, embracing vintage variation as a unique facet of their character—which makes them more interesting for connoisseurs. “The absence of additional sugar allows for the true expression of the wine’s personality and terroir, and translates to a high-acid, vibrant expression that spotlights the fruit,” explains Lexi, who leads educational experiences at The Wine Store.

The shop is known for specializing in small-production offerings from family-farmed vineyards that follow sustainable, organic and biodynamic practices. And Lexi especially touts this Hervieux-Dumez bottle, made with estate-grown grapes and minimal intervention.

The century-old grower-producer—whose legacy continues with the founding couple’s grandson, Laurent, and his sons, Clément and Timothée—focuses on biodiversity. They incorporate a vast species of plants, animals, fungi and microorganisms in the vineyards to synergistically sustain a healthy ecosystem: They have beehives. They naturally enhance nitrogen levels among the vines by planting cover crops, which encourages soil-nourishing earthworms. They raise chickens to foil bud-eating caterpillars and weed the soil through their pecking and scratching. They eschew all insecticides. They collect rainwater to wash the tractors. The result is a thriving ecosystem and Champagne you can feel good about sipping.

Elegant and fresh, with bright acidity and notes of lemon, vanilla and citrus blossom, the wine is steely and austere, which Lexi finds perfect for an aperitif or enjoyed throughout a meal, especially when paired alongside oysters and caviar, seared foie gras or truffle-topped filet mignon.

Lexi initially studied resort and hospitality management at Florida Gulf Coast University, which led to a career in catering sales, but after attending a Champagne dinner hosted by a local wine store, she was hooked on France’s famous liquid export. “I didn’t have friends my age who were interested in the intricacies of Champagne or willing to pay $200 to attend,” she admits. “I saw it as an investment in myself and went alone.”

That night, she gleaned fascinating insight on the storied French beverage—like the fact that it takes six twists to remove the cage encasing the cork, and that vine roots run deep through seven layers of soil, including porous limestone chalk, which ramps up the wine’s signature minerality and acidity levels. “Since then, I’ve been going down the rabbit hole, learning more each day,” she says.

In addition to hosting events at The Wine Store, Lexi accompanies owner Bruce Nichols to nonprofit events, such as the Naples Winter Wine Festival, furthering the retail shop’s philanthropic legacy. Gala and festival season is a fitting time to uncork a stellar effervescent elixir and toast ongoing efforts to give back to the community. “Champagne is art; it’s a labor of love—it’s synonymous with luxury and celebration,” she says.

In the end, whether you are popping a bottle at a black-tie gala, gathering with friends for a long overdue dinner party, or indulging in a luxurious pairing with fried chicken, Champagne brings people together and elicits happiness. “I don’t believe anyone has had a bad time drinking Champagne,” Lexi says. “Perhaps that’s why I love it most.”